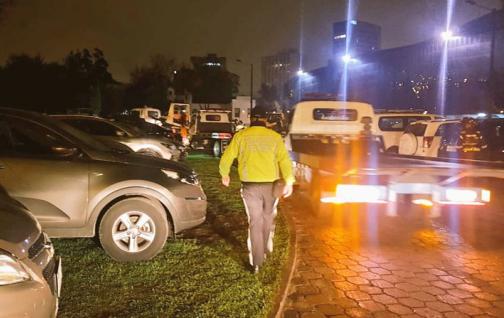 The Metropolitan Transit Agency (AMT) reported at 9:51 p.m. on Thursday, October 25, 2019 that it removed 45 vehicles with cranes from El Arbolito Park, north-central Quito.

The operation was carried out in the surroundings of the Ecuadorian House of Culture, during a concert of urban music in the Agora. The AMT said that 45 vehicles, which were poorly parked in the El Arbolito park, were transferred to the retention yard of the Municipality of Quito, located in the old north station of the Trolleybus, in the sector of La Y.

The cars were taken on platforms to the space provided by the AMT for motor vehicles that violate traffic regulations. It took approximately 30 minutes for agents and operators to remove cars and leave the park without vehicles.

People reacted and wrote messages on the AMT's Twitter account, after the operation. Users said parking near the site is scarce, while others exhibited photos of other places where the infraction is committed for agents to control.

During the operations in which the vehicles are removed, the agents usually leave in the place where the car was located a document that alerts the owner about what happened and informs him to which retention yard his car was taken. The owner must approach the site and cancel the value of both the fine (USD 39.60) and the wincha.

The cost for moving the vehicle depends on the distance traveled. For raising the car and uploading it to the platform, USD 15 and USD 3 are charged for each kilometer of travel. Additionally, you must cancel USD 3 for each day the car remains in the AMT yard; This, on average, reaches USD 40 or USD 50.

Where is parking allowed? People should look for parking in authorized places. According to the AMT, you can not park on main roads, in places that have the sign No parking, or on those streets that have the path painted yellow.

Neither on sidewalks, on the sidewalks, or in rounds. However, every day there are cars that violate all the aforementioned regulations.