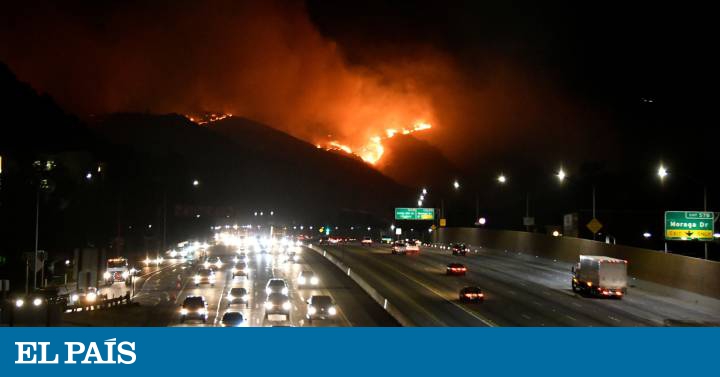 A huge column of smoke in the middle of Los Angeles reminded California on Monday of the danger posed by the extreme dry and windy conditions that forced the state to be alerted throughout the State over the weekend. The thickets of the hills next to the Getty museum began to burn at dawn for unknown reasons. It is a rural enclave in the west of the city that crosses some of the richest neighborhoods in the United States and which added to the long dozen active fires in the state, one of which threatens entire populations north of San Francisco .

The Getty fire was small in extension early in the morning, with about 200 hectares burned, but its proximity to the houses triggered the sense of danger in the city of Los Angeles and paralyzed one of the most areas on Monday morning privileged of the world. Highway 405, which serves as a sclerosed artery to move all traffic from the west of the city, was cut for safety reasons during peak hours. Classes were suspended at all Santa Monica and Malibu schools, as well as at the University of California, Los Angeles (UCLA), whose campus is a few miles from the fire.

Thousands of neighbors received mandatory evacuation orders. The world found out live because one of them was Lebron James, the Los Angeles Lakers star, who said at four in the morning said on Twitter: “These Los Angeles fires are not a joke. I have had to evacuate my house and I have been driving with my family trying to find a room. So far there has been no luck! ”

Another one who left his mansion at dawn was former Governor Arnold Schwarzenegger, who tweeted: “Evacuated and safe at 3:30 in the morning. If you are in an evacuation zone, do not make the cocoon. I thank the best firefighters in the world. ” About 10,000 houses were threatened by fire. In the morning, the flames had reached at least five. Some 2,600 customers were without power in neighborhoods such as Bel Air, Westwood and Brentwood.

Firefighters in the Kincade fire, north of San Francisco. AFP

Meanwhile, in the wine zone north of San Francisco, the extent of the fire named Kincade had almost doubled over the weekend and already covered 27,000 hectares. The streaks exceeded forecasts and sometimes reached 160 kilometers per hour. In videos shared on social networks you could see trees burning in a matter of minutes. The fire had grown so fast that firefighters announced that it was no longer controlled at 10%, Sunday's figure, but at 5%.

Around 180,000 people were still under mandatory evacuation orders, the largest operation of this type lived in Sonoma County, an affluent area of ​​vineyards, summer houses and small farms. 96 structures, commercial and residential, had burned completely until Monday. They are figures far removed from the great fires of the last two years, but in disturbing danger conditions. Firefighters believe that some 80,000 structures are threatened by this fire.

Wind conditions gave a little respite on Monday, which allowed some people to return to their homes. It was also enough for the Pacific Gas and Electric light company, whose poor infrastructure is at the source of many fires, to announce the restoration of supply. Over the weekend, has 950,000 customers, or two million people, were without power to prevent sparks.

The other fire of a certain entity this weekend, on the outskirts of Santa Clarita, northeast of Los Angeles, seemed in containment on Monday morning. Firefighters raised the controlled perimeter to 78% and the 50,000 people who were evacuated from their homes could now return. A total of 24 houses were destroyed and four firefighters have been injured in this fire that has only reached 1,800 hectares.

The authorities of California are determined to avoid by all means that repeat the personal misfortunes of the last two autumns, in which more than a hundred people have died trapped in this type of lightning fires, which move at full speed by a common atmospheric phenomenon at this time called winds of Santa Ana and a dryness of the chronic terrain. On Sunday, the governor of California, Gavin Newsom, decreed the state of emergency to be able to mobilize all available resources from city to city and from county to county. On Monday he also announced that he had asked the federal government for help.