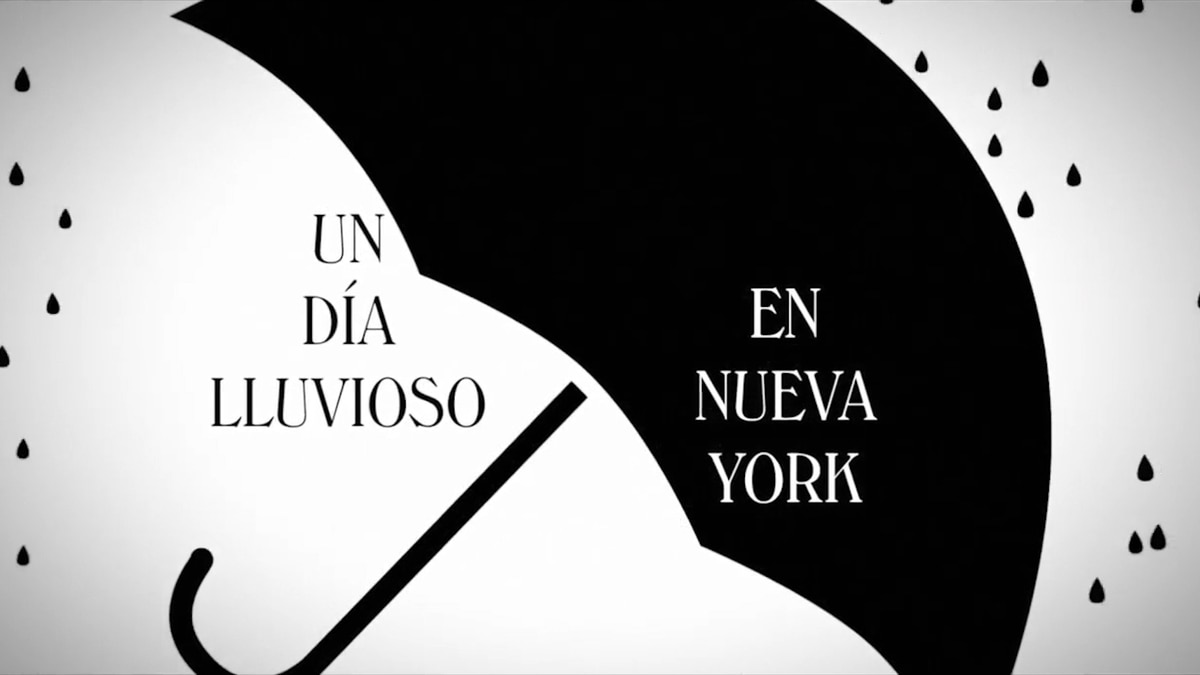 Thursday opens in Argentina A rainy day in New York, the 50th film by Woody Allen as director. But the big issue is not the milestone of half a hundred films, nor the persistence of Woody that continues to shoot at age 83, nor that it is a romantic comedy in which the protagonists are two young university students (Timotheé Chalamet and Elle Fanning ) that they find out, or that New York is again portrayed by Allen. It also has Jude Law, Diego Luna, Selena Gomez, Liev Schreiber, Kelly Rohrbach and Cherry Jones.

Produced by Amazon has not yet reached theaters in the United States. And nobody knows when he will do it (even if he will ever do it). The reason has nothing to do with this novel custom that great films of reputable directors are exclusive to some streaming platform to seduce subscribers. The million-dollar contract that linked Allen to four films with Amazon was dissolved unilaterally by the company. Woody acted against it for 60 million dollars as compensation for the termination.

It is not Allen's only problem. A musical that was planned based on his film Shooting on Broadway was definitively canceled, and the four major publishing groups in the United States rejected his memoir.

The latter is the best example of Allen's current situation. For four decades, his books have become best sellers and have a great critical consensus (some of his collections of stories are magnificent). These memories, in addition to investigating the creative process, of telling anecdotes of his career, are expressed on the accusations received from his adopted daughter, Dylan Farrow. The scandal and the morbid make glimpse a sure sales success. But nobody is encouraged to edit it.

Woody Allen and his products are poisoned today.

The origin is far away. In 1992, as a couple with actress Mia Farrow, Woody Allen began a relationship with her daughter, Soon-Yi Previn, who was then 21 years old. He was 58 years old and married to her mother, with whom he had a biological child and had obtained the adoption of two others.

A few months after this situation became known (which filled the pages of the newspapers with details that made the situation even more rugged, as Mia found out about the relationship because she found in Woody's apartment, over a fireplace, a stack of polaroids from her naked daughter), Farrow denounced Woody Allen for sexual abuse committed against their daughter, Dylan, 7.

Allen always denied the accusations. Justice on different occasions proved him right. The expert opinions too. Allen claimed that everything was a maneuver by Mia Farrow, a kind of reprisal resulting from the "spite for being abandoned" with the aggravating fact that her husband had left with one of his daughters.

Woody is one of the most prolific and long-lived directors. Only Clint Eastwood maintains a filming pace like his. Talented people without age. But they are two different cases. Eastwood is tearing down, movie by movie, suspicious of their political positions and convincing the few undecided ones that remain with their persistence, their classic cinema and their passion for telling. Meanwhile, Woody Allen receives increasing rejections. In recent times it was difficult to keep up with an annual film due to the lack of producers.

At one point he had to stop filming in New York, his city, because his films were not as profitable as before. With European capitals he filmed in England, Barcelona, ​​Paris and Rome. In Europe their actions continued. A rainy day in New York has already premiered in some capitals of the Old Continent.

Ronan Farrow is an important character in this story. Son of Mia and Woody is also a journalist. His research on Harvey Weinstein for the New Yorker was decisive for the fall of the movie magnate and for the establishment of the #MeToo era.

Ronan (formerly called Satchel) was always an outrageous defender of his sister Dylan and his mother. He criticized every time he could his father. He believes in his sister (who keeps the charges against his father as the first day) and is convinced that Woody abused her.

Ronan's contribution was vital to produce Allen's current collapse. His research confirmed the fame of a child prodigy that accompanied him for years and provided him with a Pulitzer Prize. But not only that got. The journalistic note, primarily, became the perfect revenge against his father.

The most obvious connection is that Weinstein was the producer who rescued Woody Allen as soon as the scandal occurred in the early 1990s. Weinstein produced Mysterious murder in Manhattan at the lowest point of Allen's reputation in 1993. He then continued to invest in his films and he got Woody to maintain his place in the industry, releasing films one by one per year, with casts that overflowed with stars that acted for the minimum wage, receiving awards and honors.

But the effect of the complaints against Weinstein was not only the arrest and the discredit of the producer, but the establishment of a new order. Thus, the image of Woody Allen deteriorated as he had not done in the fourth century that measured between the denunciations and his fall. Ronan was a key piece to establish a climate of time in which one of the main harmed was his father.

Each time Woody Allen received recognition in recent years (an award, the possibility of opening the Cannes Festival, a statue in Spain), Ronan and Dylan made known (in fact, they remembered) their history with letters from readers, columns and interviews.

After the accusation against him was known, Woody Allen premiered a whopping 25 films (half of his filmography). No one seemed to bother him for two and a half decades. Everyone was willing to believe him, to forget, or at least to think that a division between the work and the artist had to be created. But with the installation of #MeToo, in the Post Weinstein era, everyone remembered the accusations they forgot or dismissed for 25 years.

A long line of actors and actresses were sorry to have participated in their films (their casts always brought together the best actors who came to be directed by him in exchange for the minimum payment established by the union: the experience was worth more than money) . Only a few continued to support him.

No one can tell another what they can or should feel in front of an artistic work. Those impositions never lead to anything positive. Not even anything legitimate. Perhaps like no other, the case of Woody Allen shows this imposture and the phenomenon of public statements that do not represent a position that stems from the conviction or that imply any personal commitment.

The facts that are imputed to him (and of which justice acquitted him: here it should be clarified that these types of crimes by their characteristics of commission are almost impossible evidence in the traditional criminal system unless they leave very tangible physical consequences) 25 years old.

Many of those who now refuse to act for Woody Allen, do not release their films or "cancel" them, gained prestige acting for him, produced their films or benefited in some way. There were no new facts in the cause. No evidence or testimonies appeared that illuminate the events or provide elements that were unknown and incriminate the director.

What changed was the weather of the time. As journalist Gustavo Noriega said when speaking of Michael Jackson and Leaving Neverland, the documentary that exposes the abuses to which he subjected children: “Lately, there are no personal reactions, prudence or analysis: there are statements. For the Argentine journalist, the facts are little, it is necessary to leave his position. On any subject, photos are taken all together holding signs with your statement; on the other hand, before the unveiling of improper behaviors by an artist, the record labels, the radios, the television programs, eliminate it from the programming. They make their statement: they condemn the episode and its responsible, but they have to do it publicly, because that is how they make their declaration of principles. The statement is ideal to be superior to the convicted. It is a free bath of moral satisfaction. ”

This attitude of social condemnation of Woody Allen who, for example, prevents his film from being released or his memoirs published, is extemporaneous. Since nothing has changed in his personal situation in these 25 years in which he released 25 films. Only the way in which others can be judged by relating to him and his work was modified.

Woody Allen can cause disgust or admiration. Moreover, it is possible (and probable) that both sensations coexist. It is not strange that the confusion takes hold, that there are situations that are complicated to frame, in which our contradictions manifest themselves openly.

An old discussion. Can you separate the work of the artist? Naturally, an artist's work is marked by his experiences, which are filtered and manifested in his creations. The history of art is populated by masterpieces produced by despicable beings. Misogynist, abusers, Nazis, murderers. Pablo Picasso, Martin Heidegger, William Burroughs, Louis Ferdinand Celine and hundreds more. And there are those of whom we do not know their crimes, perversions or moral failures. However, his works remain beyond the criminal capacity or ethical weaknesses of the author. In the case of Woody Allen, there are, undefeated, movies like Manhattan, Annie Hall, Crimes and Sins, Broadway Danny Rose, Hannah and their Sisters, Tales of No Feathers and hundreds of perfect one-liners.

The damage he has done to his family can only be measured by his children. Although we can effortlessly imagine its magnitude by reading the phrase Ronan Farrow once wrote: “My dad married my sister. That in addition to his son, makes me his brother-in-law. That is a moral transgression. ”