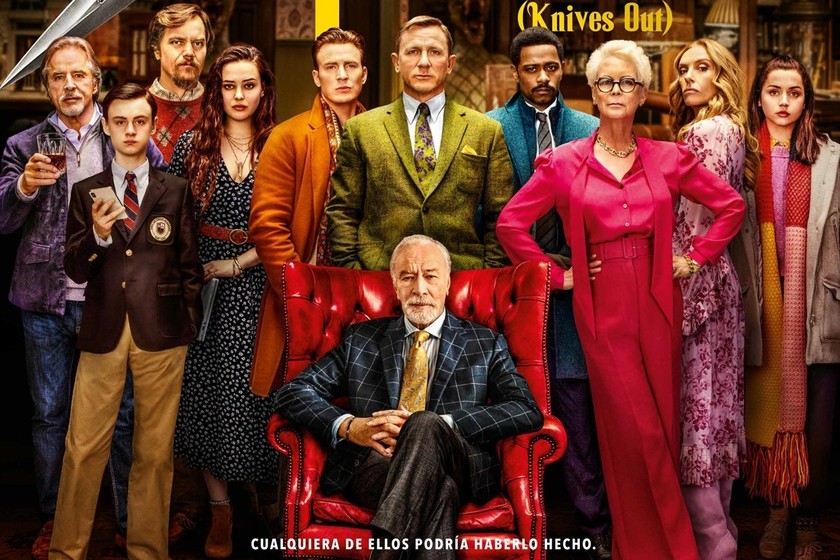 Rian Johnson could have opted for the easy path and get to work on his new Star Wars trilogy after the premiere of 'The Last Jedi', but the director of such esteemed tapes as 'Brick' or 'Looper' preferred to retrieve an idea that He had been around his head since 2010. A mystery tape inspired by the novels of Agatha Christie that has finally shaped 'Daggers in the back'.

Johnson has told the occasion with a cast full of familiar faces to tell us the story of the mysterious death of Harlan Thrombey – a name that makes direct homage to one of the novels of ‘Choose your own adventure. For this he has chosen to machine an elegant and addictive game that mixes mystery with comedy brilliantly.

‘Daggers in the back’ is a very playful movie that at all times assumes its status as a tape that wants to be cool. This can be an entry barrier for some viewers, because although it is not something that restricts us by the face without any shame, it does require that the viewer assume that he will not see a thriller to use, since Johnson also baby of more parodic cutting ribbons such as the sensational 'A corpse to desserts' or the fun 'The game of suspicion'.

In fact, one of the main keys of ‘Daggers in the back’ is how well it balances those aspects to become an irresistible film. Already in the first act it exhibits an energy different from what usually comes to us from Hollywood, with an enviable dynamism all the characters are introduced while we scratch our heads thinking about what exactly could have happened with what looks like a simple suicide.

To this playful component it helps that the victim is precisely a very popular writer for his suspense books – charming Christopher Plummer -, so that he would be the one who could best be guided by what happened, even above that peculiar French detective played by Daniel Craig. That small dose of uncertainty that he brings is a fable to the film until he puts all the cards on the table for the first time – and that is not going to be as simple as that.

After presenting a great carousel of characters in which all the actors give the sensation of having a great time – something that is transmitted at all times to the viewer -, 'Daggers in the back' bets decidedly by one of its protagonists – that surely it will not be the one practically nobody expects – and directs the suspense in one direction. There the rocambolesco that results from entry is underlined by exposing the facts clearly and giving the public all the clues you need to try to fit the pieces of the puzzle.

That is supported at all times in a fluid and elegant staging by Johnson, which never stops more than necessary at all but does not make the mistake of falling into a rhythm too precipitous. Everything is happening at the right speed, further enhancing humor or mystery depending on what each moment requires, but never sacrificing the other. It was a dangerous cocktail that could easily come down, but Johnson is triumphant – especially successful is in the way of handling the particularity of the character played by a great Ana de Armas.

And in case there is a time when interest could decline – something that does not happen in my opinion – we always have a cast delivered to the cause, able to take advantage of the few scenes it has to leave a mark and present yourself as an aspirant to have Committed the crime. I really enjoyed them all, but I would especially like to highlight Chris Evans' entry during the reading of the will. Wonderful.

In addition, it is worth highlighting the honesty of Johnson, also author of the script, when it comes to building the story. The greatest license that one can see in it is that the character played by Jaeden Martell seems a direct replica of all the attacks received with ‘The last Jedi’, but even then it does not go beyond the line. Apart from that, it is appreciated that he does not look for surprise by surprise – although there are several turns throughout his footage. It is one thing to play with the spectator and another to tease him. There may be some who guess the solution ahead of time, but the trip is so entertaining that it is not an insurmountable fault to enjoy with it as with few movies in this 2019.

‘Daggers in the back’ is probably the best cinematic pastime of all this 2019. He knows how to play with the spectator without being cheater, it combines the two main genres very well, it gives the right tone and it presents itself as fluid and elegant. To this we add a great cast that brings everything necessary for your characters to come alive instead of just parading on the screen. I would see her again right now and she gives me that I will do it repeatedly over the years.