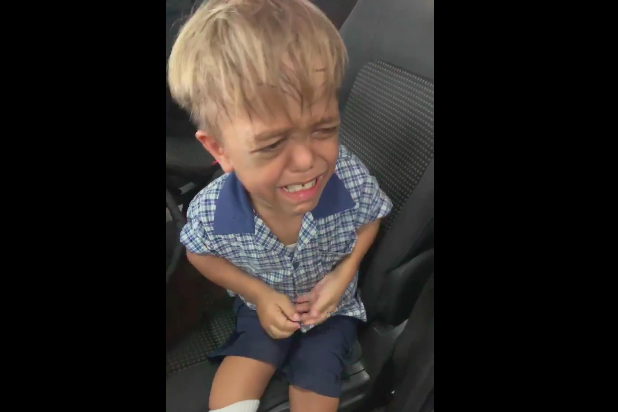 An Australian boy with dwarfism who was a victim of bullying to the point of wanting to die received an avalanche of messages from celebrities and donations to travel to Disneyland. A nine-year-old video of Quaden Bayles, uploaded to Facebook by his mother, showed him crying and saying repeatedly that he wanted to die “right now” after being bullied and teased at school. The video had more than 16 million views on Friday. The mother, Yarraka Bayles, said she had shared it to raise awareness about the impact that bullying was having on her son. Read more: The force is with this 10-year-old boy who did not defend himself from bullying because a Jedi would not “I have a son who is suicidal almost every day,” says the woman on the recording. Support for Quaden The props for the child multiplied as the video was broadcast online, and a GoFundMe page created by American comedian Brad Williams has raised more than $ 150,000 to send Bayles and his mother to Disneyland in California. “This is not just for Quaden, it is for anyone who has been harassed in their lives and told they were not good enough,” he wrote Williams, who was also born with achondroplasia – the most common type of dwarfism – on the fundraising page. Williams said the additional funds will be given to organizations against child harassment. Terate: Bullying to intelligence: discrimination against outstanding children in Mexico Australian actor Hugh Jackman and NBA player Enes Kanter are among the hundreds of thousands with messages of support for Bayles. “Quaden you are stronger than you know, friend ” And no matter what, you have a friend in me, ”Jackman said in a video broadcast on his Twitter account. Bayles will also lead the Indigenous All-Stars team as he enters the field in his National Rugby League clash with the All Stars. Maori in Queensland on Saturday. Controversy After Quaden’s case went viral, rumors spread on the internet that he was actually an 18-year-old man and that his story was only a fraud to scam people. The only thing that showed itself as “Evidence” was a photograph of the boy next to a number 18 (supposedly on his 18th birthday) and other images of him in more “adult” poses. Before these rumors spread rapidly, the Snopes information verifier site said these rumors they are false and that Quaden Bayles is indeed a 9 year old boy, therefore that video is true.