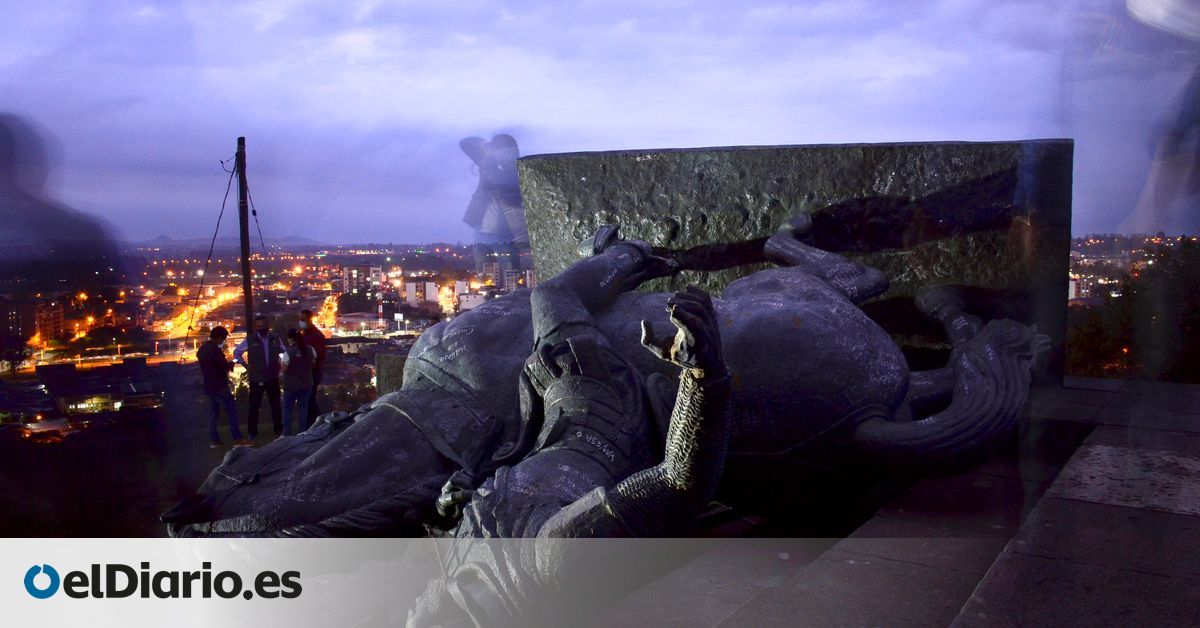 The most recent to fall headless from its pedestal was, at the end of June, a Carrara marble Christopher Columbus in the port city of Barranquilla. It has not been the only one. At least seven more monuments have been demolished amid the mass demonstrations of the last two months in Colombia. In Cali, a bronze fell from the Cordoba conqueror Sebastián de Belalcázar; and in the heart of Bogotá a sculpture of the founder of the capital, the Granada lawyer Gonzalo Jiménez de Quesada, was shot down.

After most of the damage, there have been indigenous groups that have used the social crisis that the country is experiencing, but also the tailwinds of the American anti-racist movement Black Lives Matter, to question a history dotted with violence and state neglect.

In reality, it all started in September last year, when indigenous people from the Misak people demolished a statue of the aforementioned Belalcázar in the Morro de Tulcán, an archaeological site in Popayán, in the southwestern part of the country. Indigenous spokespersons defended at that time that it was a “symbolic trial” of the conqueror, a claim against the dispossession of land in a place sacred to them long before the arrival of the conquerors.

Few heeded that signal and today the phenomenon has acquired another dimension. Some sculptures have had to be removed by local councils or the Ministry of Culture due to the obvious threat. This is the case of a figure of Isabel la Católica almost four meters high that preceded a curious little square near the El Dorado international airport in Bogotá. A few steps from the Castilian queen was a Columbus that was also quietly dismantled in the early morning of June 10.

For the doctor in History of Art Elkin Rubiano, the attacks confront Colombian society with a paradox: if, on the one hand, attention is recovered on a statue in poor condition and forgotten, on the other, the need arises to find consensus around a fairer historical account. Or, at least, broader.

Rubiano estimates that these are monuments that were already “demolished in another way.” “It is curious,” he continues, “that these works now make big headlines after so many years in neglect, in oblivion. In reality they were places that served as urinals or were painted and vandalized.”

Very few know, for example, that the sculpture of Isabel la Católica is the work of a Moden named Sighinolfi (Italy, 1833 – Colombia, 1902) and that it has a certain artistic value. The Italian was the first master of sculpture in the country and the work was commissioned to commemorate the fourth centenary of the discovery of the continent in 1892. Due to a civil war at the beginning of the 20th century – called the ‘thousand days’ – the work made a pilgrimage between wineries before being presented to the public a decade later, in 1906. The artist died without seeing his greatest work inaugurated.

“These two statues by Siginholfi”, as the art historian Carolina Vanegas, “follow a pattern that is repeated in other monuments and that clearly explains why they are works that lack representativeness: or they have not been conceived to fit within a plan of course, or they have been moved so many times from their original location that it is impossible for citizens to appropriate public spaces and their monuments. “

Now citizen disinterest is mixed with an iconoclastic movement, sometimes with certain anarchist or thoughtless tics. The case of the Misak amalgamates a discourse of contemporary political demands, such as the multiple government breaches with ethnic minorities, with claims for old debts and spoils from the colonial period.

Against some prejudices disseminated by local media, the doctor in History Margarita Garrido says that these are “groups of young lawyers who have deeply reflected on the need to rewrite urban texts imposed by a patriarchal, white and Catholic order” .

One of the peculiarities of the Colombian case is that it has not been young urbanites embarrassed by a slave-owning past who have spurred fury against the monuments. In Colombia they have been minority indigenous communities that have traveled from remote rural areas to vent their discontent in the urban areas. In the centers of power.

In the statements of multiple politicians of the Democratic Center, the formation of President Iván Duque, it is repeated that these are “acts of vandalism” and that those responsible must be brought to justice. The Minister of Justice, Wilson Ruíz, pointed out that after the demolitions there are “infiltrated terrorists.” And a person in charge of heritage from the Ministry of Culture recalled in the newspaper The Herald of Barranquilla that all sculptures made before 1920 are cultural heritage and their destruction or damage should be punished.

But beyond the official perplexity, voices have also emerged determined to understand the causes of the deep malaise. Historian Jorge Orlando Melo’s diagnosis, for example, alludes to the lack of indigenous political representation in Colombia, unlike the Peruvian, Ecuadorian and Bolivian cases, where presidents of Inca or Iru-Aymara roots have been elected.

“This is a way of saying: ‘here nobody pays attention to us,” says the historian. “In Bogotá there is not a statue, nor an avenue, that remembers some indigenous chief or leader. Instead one of the main streets of the capital has the name of Jiménez de Quesada, who was the colonizer in command of the troops that they assassinated Tisquesusa, the last zipa of the Muisca tradition. “

It would be advisable, in his opinion, “to present a more varied, more complete story.” But despite the inequality in the urban symbolism, Melo judges that the destruction has been against the indigenous: “People in Colombia, in general, feel offended because they mistakenly believe that they are mostly descendants of white Spaniards, much more than the Indians. ” This belief has a clear impact on the streets of the country, where one of the loudest insults to disqualify someone is “don’t be an Indian!”

And is that Carolina Vanegas, researcher on heritage issues, adds that language is not innocent. He says that in his studies he has identified that the “greatest destruction of heritage” have been driven by politicians and governments. When parks, statues or gardens are razed with little or no planning, he says, labels such as “urban renewal plans, urban furniture modernization, restructuring or reorganization” are often used. When the affectation instead comes from the citizenry, the lexicon used is “vandalism, outrage or destruction.”

The story can be, at first glance, a puzzle with colored pieces that do not fit into place. In Colombia, not only statues of Spanish colonizers have fallen to the ground. Monuments of two historical figures who, in principle, were believed to meet some degree of consensus, have also been demolished or removed.

In Bogotá, the equestrian statue of the liberator Simón Bolívar (the work of the Frenchman Emmanuel Fremiet, author of a brilliant ‘Joan of Arc’ in the central Place des Pyramids in Paris) was removed from the monument to Los Héroes, the epicenter of the recent demonstrations. And in Pasto, in the southwest of the country, a group of protesters knocked down a sculpture of the not infrequently revered translator of the rights of man and citizen Antonio Nariño.

Most of the works threatened today are the product of the spirit of the late nineteenth and early twentieth centuries. At that time, the centenary of the cry for independence (1810) and other events began to be commemorated with trumpets and drums. Historians, politicians, and poets went to great lengths to glorify their heroes.

The result was a sculptural production with aesthetic values ​​”republican, classics according to the European canon”, explains Elkin Rubiano; The majority were commissions made to French and Italian sculptors who had furnaces to melt metals that did not exist in Colombia. “At that time,” Rubiano continues, “the ideal of the elites was an aspiration of the European. That was the spirit that marked the celebrations, short-circuited with a mostly mestizo population, with other bodily features and probably other aesthetic values.”

Bolívar (1783-1830), who was a wealthy white Creole, said: “We are neither Indians nor Europeans, but a middle species between the legitimate owners of the country and the Spanish usurpers.” Today, however, its image is being reassessed and from certain fronts the Venezuelan military is associated with an exclusive order. Something similar happens with the Bogota journalist Antonio Nariño (1765-1823), who in Carolina Vanegas’s opinion is seen by citizens of the southern department of Nariño, named in his honor, as a clear representation of a too centralist political system.

In any case, the Spanish archaeologist Alfredo González Rubial clarifies that the purpose with the statues has never been to write biographical accounts, nor has it ever been intended to support doctoral theses with them. They are, simply, symbols of political power and forgers of national mythologies of a certain time. The story of the jurist ‘Jiménez de Quesada’ lying down in a plaza in the center of Bogotá is a good example.

Indigenous leader Miguel Morales explained to a Turkish news agency that the “image” of the founder of the capital is “outrageous” because it “re-victimizes” his people. For this reason, he added, the demolition “means healing the memory, demolishing official narratives and making the indigenous struggle visible (…)”. The work was a gift from the Franco dictatorship to Colombia in 1960. Its author, Extremadura sculptor Juan de Ávalos, also signed the monumental figures of the evangelists in the controversial Valley of the Fallen.

“As for the statues of discoverers or conquerors,” the Spanish historian José Álvarez Junco asserts by mail, “the matter is complicated. It is clear that they are not role models for today’s world, and in that sense they should not be honored. But they are also part of history, they changed the course of events, their action had positive and negative effects. But it is clear that their presence should be complemented with memories also of those who suffered for their behavior. “

Elkin Rubiano tells, pulling the same thread, that a publication on this matter cost him so many insults on Twitter that he had to close his account: “I questioned the usefulness of this kind of retroactive lawsuits.” In his opinion “the sculptures have different memories” that are not solely anchored to the period of the conquest. For this reason, he concludes, those positions of “vindictive justice” limit the possibility of finding plural stories or, as the expert Garrido proposes, a “polyphonic memory”. A desire that was already consigned in the basic framework of the 1991 Constitution, which is 30 years old these days, when it defined the State as “multiethnic” and “plurinational.” Making it happen will be one more challenge for a whole generation of young people who have already taken to the streets to write their own version of a somewhat cracked narrative. 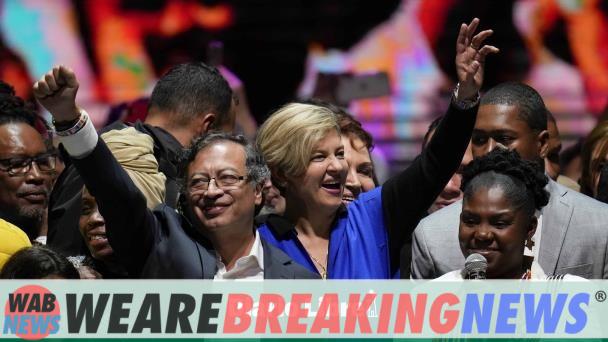 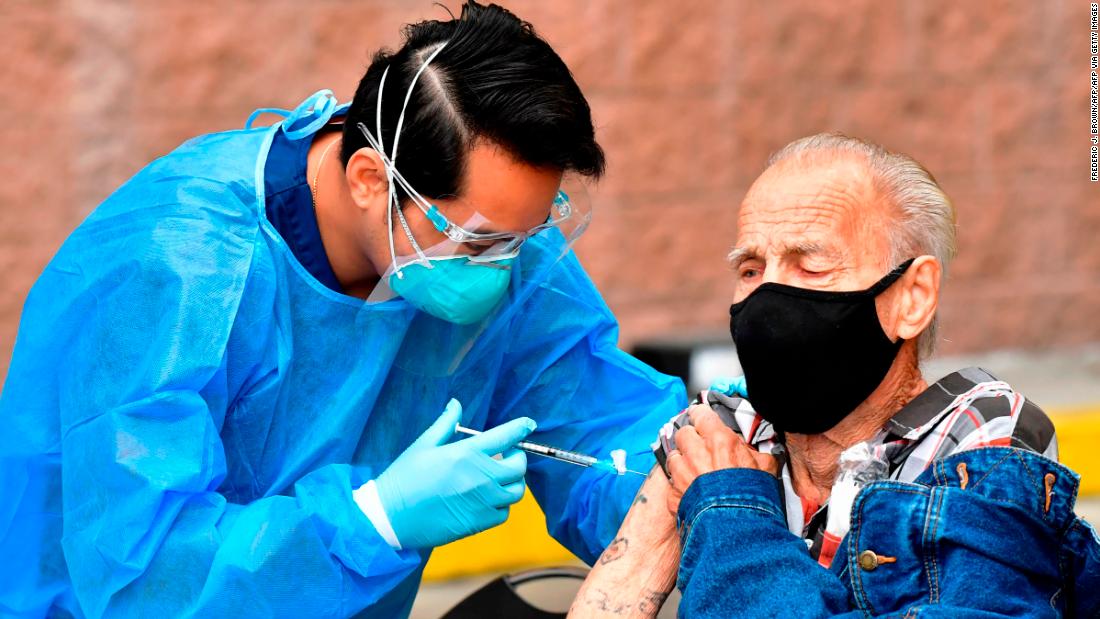 How Serious a Wave Of The BA.2 Subvariant Of The Coronavirus Could Be 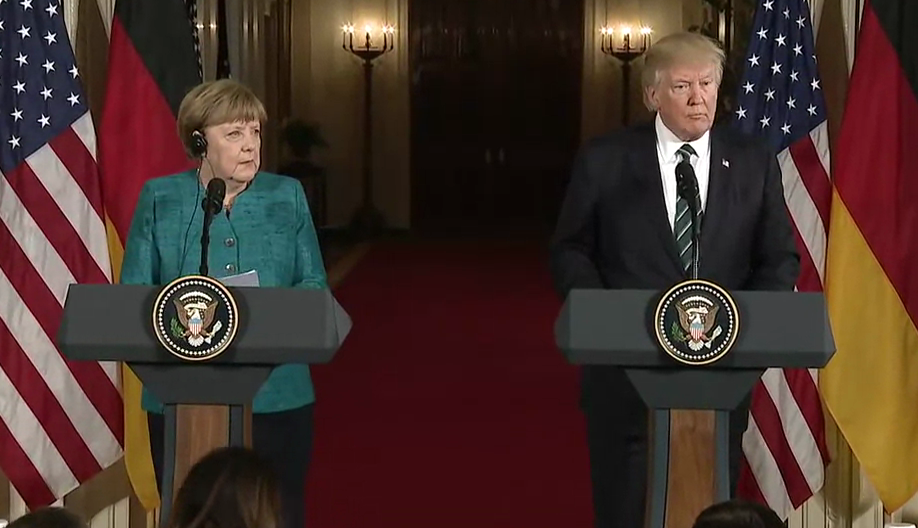