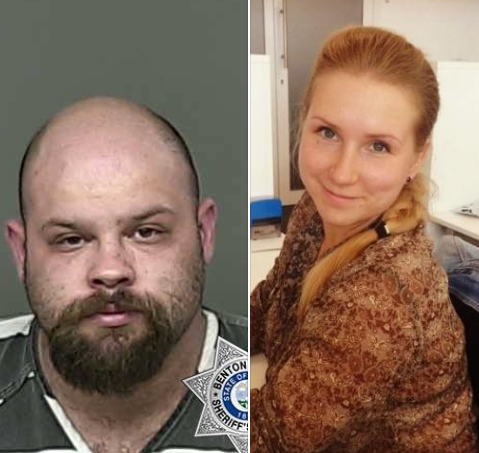 At the end of a lonely road near a sawmill in the forest of Alsea, Oregon, the watchman of a logging company found the body of a young blond woman with a shattered skull for what appeared to have been a shotgun discharge, the newspaper reported. local Gazette Times.

He wore blue jeans, a gray sweatshirt and a black jacket. His legs were outstretched and his arms were at his sides, according to the crime scene photo that was shown on October 31 by District Attorney Amie Matusko at the circuit court in Benton County, Oregon.

At the crime scene, however, there was nothing to identify the victim. Nothing but a receipt from the KFC fast food and fried chicken chain, The Washington Post reported.

Police found the purchase note inside a KFC bag of take-out food that was next to the body. There was a written name: Kevin Thomas. When the police interrogated him, Thomas told them that he had simply gone to have fried chicken for dinner with a friend the previous weekend.

That friend, William Chase Hargrove, was involved in an intricate love triangle with the victim, a 27-year-old woman of Russian nationality who had flown from Moscow to marry him, and another woman named Michelle Chavez.

Police have accused Hargrove of killing Anna Repkina weeks after she traveled from Russia to marry him. Thomas said his friend had borrowed a shotgun a few days before and had not returned it. Prosecutors plan to present evidence that the weapon was in the defendant's car and that telephone data indicates that he used his cell phone at the scene of the crime on the day of Repkina's death, according to The Washington Post.

The forensic doctor who did the autopsy described in detail the wounds on Repkina's body, including the gap that opened the discharge of the weapon on the back of her skull, made from the victim's back at a lower height to her head and a close distance but not point blank, Gazette Times reported.

Matusko said that Hargrove had been living in a room that he rented in the house of Chavez, who lived with her husband in an open relationship while having an affair with the now defendant.

Initially, Repkina's visit in 2016 had not been a problem for people in the love triangle. However, in March 2017, the victim decided to move permanently to finalize their marriage plans. This bothered Chávez, who asked both of them to leave his home and then demanded that Hagrove end the relationship, the Washington Post reported.

Then, in April, Chavez gave Hagrove a final warning who had already canceled the wedding scheduled for March 23 but was still living with Repkina, asking him to "get rid of her." She even told her that if she didn't, she would make "a snowman" herself, a reference to a family joke about a way to kill someone and get rid of the body by burying it in a snowman in a place so cold that it never it would melt, according to the newspaper cited above.

Hargrove's lawyer argued that the real murderer was in court, but he was not his client, but Chávez herself. The prosecution has not filed charges against it to date and is one of its witnesses in the case.

Chavez said that the reference to the snowman was an expression and by no means a true intention.

Hargrove told police that his relationship with Repkina was superficial and that they had only dated together twice. When the detectives asked him about the receipt of the KFC chain that was found at the scene of the crime, he said he had thrown it in a trash can in the town of Alsea, they replied that this was not possible, and then asked for a lawyer and He said no more, the Washington Post reported.