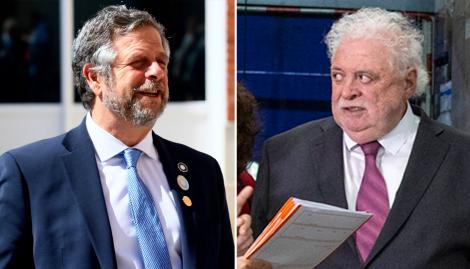 This Friday, Health Minister Ginés González García celebrated the release of the first batch of 12.4 million doses of vaccines held in Customs since June. The official said that the issue "was resolved by our political will and the social, health and economic emergency law that exempted the State from paying tariffs and fees," but his predecessor denied it.

Following the statements of the Minister of Health, former Secretary of Health Adolfo Rubinstein said he left the administration "with 6, 7 million doses of which more than half arrived in the last two months, the deadlines they usually have" and added that "There is a list of medications that did not pay taxes, such as the triple viral."

"Those that did have and pay important customs taxes come from PAHO or outside the country, at the end of the administration we had released several taxes. The economic emergency law now increases the list that was already there," he said in statements to Miter radio.

Rubinstein said the measles-fighting vaccine did not pay taxes and, therefore, was not withheld. "There is a strong intention of the government to justify why the economic and health emergency was launched," he said. "It was not necessary, there was a decree."

The former secretary of Health considered that the Government uses measles politically "since the campaign." "We have 90 or 95 cases, not 9000 because the vaccination rates in our country are very high, there are suburban parties that have low rates and that is where the positive cases are seen. There was always stock and vaccination. There was never a critical lack of vaccines "he insisted.

Rubustein again referred to the protocol he published in the Official Gazette and which was repealed the following day by former President Mauricio Macri: "It was the continuity of a policy we had during the administration. This measure we were going to take and it was already known," He said and argued: "The electoral scenario, which also lasted longer than was due, caused this to be delayed, after the elections I had warned that we were going to hold it."

Finally, he pointed out that "the protocol only updates the norms to the reforms of the civil code. I regret the repeal and I applaud that Ginés has replaced it."