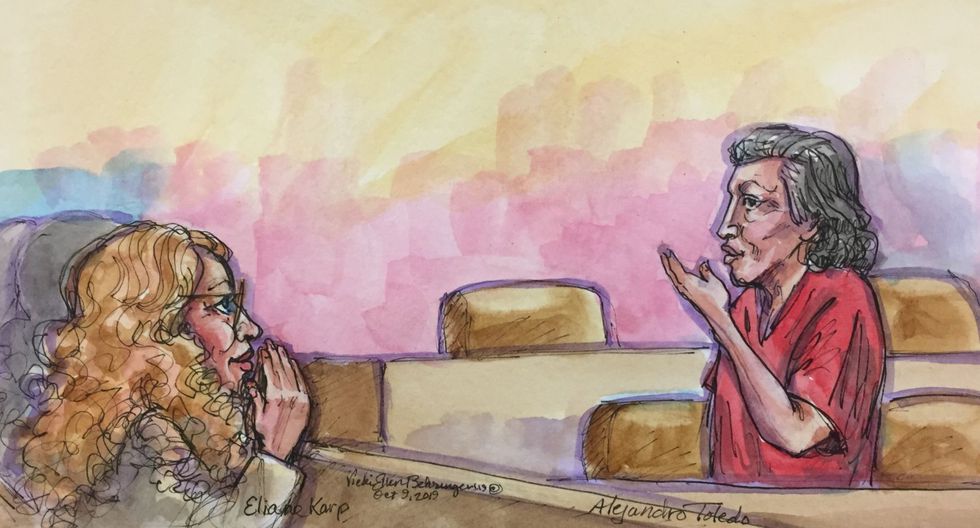 For a month, when his last appeal hearing was held, Alejandro Toledo's defense in the United States has focused his strategy to secure bail on a humanitarian factor: the deterioration of his mental health. And the effort has had results. The judge in charge of reviewing the new appeal filed by the former president's lawyer said yesterday that, taking that argument into account, he would release Toledo if prison conditions were not changed. The letter sent by the prison psychiatrist where he is being held – to which this Journal had access – has been key in this decision.

“Most people agree that being in solitary confinement is very close to torture. Why, then, shouldn't this be a special circumstance that justifies his release? Toledo is alone in a 48-hour cell 47 [Nde: although the regime he is in allows him to go out one hour a day to the patio], and that is precisely what makes people go crazy, ”Judge Vince said Chhabria yesterday at an audience where he finally did not make a decision.

But according to the report of the Northern District Court of California, Nicholas Lovino, the judge made it clear that if the federal government cannot find any intermediate prison regime – one that does not involve isolation, but also that Toledo is mixed with the inmates common— will choose to grant bail. "Now the only options presented to me are to release him or in solitary confinement," Chhabria complained.

At the end of the hearing, the judge informed that today he will issue a written verdict. Chhabria also said that, if bail is granted, this measure will most likely be temporary, until the US sheriffs' service can find a way to have Toledo in prison, but not in solitary confinement.

Since July 16, Toledo has been detained in a cell of less than 10 m2 in the Santa Rita prison, California, while it is defined whether he will be extradited to Peru to face the processes that are followed by the Odebrecht case. His prison regime does not allow him to interact with his pavilion companions – or with any other person – and assigns him only one hour of yard a day.

Already since the hearing held last month, Toledo's public lawyer Steven Kalar warned that this prison regime could cause him psychological problems and other harmful effects on his mental health. This argumentative line has taken strength to become the center of the discussion about whether or not the former president can face his extradition process in freedom.

At the September hearing, prosecutor Elise LaPunzina replied that allegation assuring that, according to the sheriffs' service, Toledo himself had requested a "special protection" regime and that the only one available in Santa Rita is solitary confinement. "Since Toledo asked to be placed under a special protection regime, he could withdraw that request to be designated in a lower risk regime and be confined with the other inmates," he said.

LaPunzina explained that the isolation regime not only applies as punishment to violent inmates, but also as a measure of protection for some people against the rest of the prison population – in this case at the request of the same inmate -, and that it would not make sense that Toledo be released by something he asked for. “Toledo has created the conditions of confinement of which he complains. He should not be released on the basis of a circumstance that is under his control, ”he said that time.

At the last hearing to define Toledo's appeal, held yesterday, his defense presented a letter that ended up tilting the humanitarian balance in his favor. In the letter, the psychiatrist Dave Schatz, who treats him in Santa Rita since he entered in July, explains the conditions of "marked deterioration of mental health" presented by the former president.

“I have seen a collapse in Mr. Toledo's interest in maintaining his hygiene and hygiene conditions,” begins the psychiatrist. “I have seen a marked demoralization, along with a significant increase in their anxiety and depression. I have increased Mr. Toledo's medication due to this increase in anxiety and depression, but this is just like putting a "band-aid" on an open wound, ”he continues.

Schatz also details the physical signs that prove increased anxiety and depression in the former president. “Mr. Toledo shows a growing psychomotor delay, which means a significant slowdown in his movements. Mr. Toledo makes much less eye contact than when I started treating him. […] Mr. Toledo repeats what he says much more often than when I met him, which demonstrates a growing memory deficit, and presents marked difficulties in concentrating, ”the letter details.

The psychiatrist, who is a member of the Santa Rita staff, also explains that Toledo is being held under the regime formally known as “administrative segregation” —before known as “the hole” – because the prison has no other way of separating him from common inmates , among those who would be at risk. "It is important to note that Santa Rita, due to the unique nature of Mr. Toledo's case, has no way to confine him in any other environment," he says.

Schatz concludes the letter saying that “I hope that Mr. Toledo's marked conditions of mental health deterioration – a natural result of an environment that I doubt that no judge or jury could really imagine unless they saw it firsthand – are a factor to take into account [for the decision of the Court on your bail] ”.

Toledo's defense, in the letter sent to the Court for the appeal hearing, takes the letter from the psychiatrist as the center of his case. "[Toledo] has suffered about three months of solitary confinement, which has resulted in severe damage to his mental health, as has been documented by his own psychiatrist in prison," says lawyer Kalar.

The main concern of the defense – he says – is that, due to the nature of the extradition process, Toledo would remain in isolation for a long time. In addition, he states that the former president “does not remember having made that request [special protection, which resulted in isolation]” and that the prosecutor was unable to present the document in which, according to the sheriffs service, the request would have been registered .

Finally, it brings a new argument to the table: that the GPS that would be placed on Toledo's shackle would launch an alarm if he wanted to flee the area to which his confinement is defined outside the jail. "Both radio frequency and GPS monitoring provide real-time notifications about possible violations [escape attempts]," he says.

After what was said by Judge Chhabria yesterday, that he will most likely order the former president's freedom until the government can find an intermediate option between isolation and the risk of common criminals, prosecutor Elise LaPunzina said that it would seek to organize his transfer to Another prison

"Prosecutor Elise LaPunzina said the sheriff's service would seek to transfer Toledo to a facility in San Mateo County or Los Angeles, where she does not have to be held in solitary confinement," says reporter Nicholas Lovino. Until that option is found, however, it is most likely that the former president prosecuted for acts of corruption can enjoy bail.