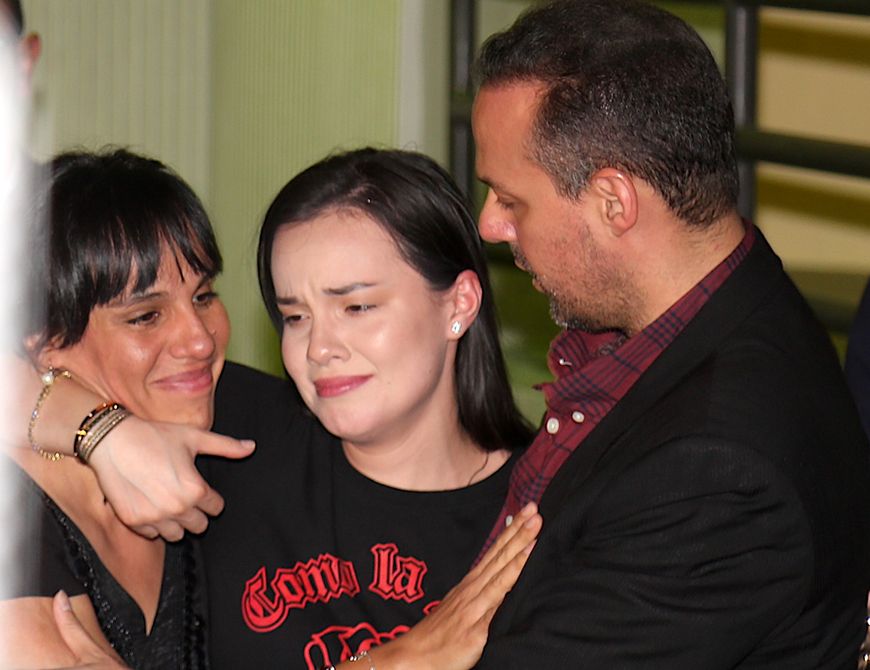 While the world cries the death of José José, a true novel with all its ingredients is lived within his family, especially among his three children, the two eldest of his marriage to Anel, José Joel and Marysol; and the smallest, from his relationship with his last wife, Sara, Sarita.

And like every good novel, the story of separation, accusations, passions, anger and a supposed happy ending of reconciliation has everyone as spectators waiting for each chapter.

The key day in this saga was last Tuesday, where José Joel and Marysol first gave a conference asking again, with all their right, to see the body of their father José José. They said they would demand an autopsy, they accused their sister and her mother of being interested only in money, they relived the moment they took their father from Mexico, in the middle of his pancreatic cancer treatment, and even hinted at or put in Doubt the way the great artist died.

Hours later of all those accusations or assumptions and three days after the tireless search for the body of José José, the image we saw immediately followed was that of the three moved brothers hugging and sealing the story of distrust with a hug and the announcement of the reconciliation?

How did you get to that hug? Why in the Mexican consulate? What happened inside the door? What does Noelia's husband have to do with all this history and the Miami City Commissioner, Joe Carollo, and the Mexican president Andrés Manuel López Obrador? Then the answers.

More than a reconciliation, in a story of disagreements, approaches and distances between José Joel, Marysol and Sarita. It would be purely and exclusively a truce after an arduous negotiation with lawyers and even the Mexican government in between.

– José Joel and Marysol receive the news of the death of their father through a phone call from their younger sister, who had been in charge of José José for a year and a half when he went to look for Mexico and transferred him to Miami in the midst of its treatment to fight pancreatic cancer.

– There were two calls, one with the news and another warning that they were traveling to see and say goodbye to the singer's remains. In the second call there was a phrase that seems to have changed course and triggered the beginning of these misunderstandings: "There are many answers you have to give us," from José Joel to Sarita.

– The older children arrived in Miami on Sunday, one day after the death, and went to look for José José's remains at the headquarters of the wake house that will be in charge of the farewell ceremony in Miami: Caballero Rivera. But they did not find the body … They moved to the hospital where the singer died and would have taken them out of there under threat of calling the police.

– For three days José Joel and Marysol toured morgues, talked to the press and looked for their father. They called their sister Sarita to communicate with them and tell her where her father was. Doubts arrived, accusations and even threats.

– Jorge Reynoso, husband of Noelia, who is also a close friend of the Mexican consul in Miami, Jonathan Chait Auerbach, would have interceded and presented the eldest sons to a lawyer to help them and would have tried to be the organizer of the famous meeting .

– José Joel and Marysol would have turned to the Mexican consulate and the Commissioner of the city of Miami, Joe Carollo, for legal help to find his father's body.

– Through the legal and political apparatus, the reunion is reached.

The side story of Sarita, the youngest daughter
Sarita, daughter of José José. / Photo: Mezcalent

– He grew up with his father and mother in Miami surrounded by controversies.

– When José José was diagnosed with cancer and had surgery in Mexico, Sarita decided to go find him and take him to Miami, where they both lived, at least since Sarita was born. To get him out, the singer signed a power to the youngest daughter to decide everything about him.

– The singer lived during the next year and a half between the hospital and his daughter's house with his son-in-law and granddaughter. Why in Sarita's house? Because remember that again the singer would have lost all his fortune, including the mansion he had in a private neighborhood in Miami.

– While his wife Sara, who still lives with the aftermath of a stroke, lives in his mother's house, also in Miami.

– During all this time, Sarita would have dedicated her body and soul to taking care of her father, until the day that, as a result of pneumonia, her organs stopped working and she died.

– Sarita called her brothers to give her the sad news and began the paperwork, signed by her mother because in the United States the law allows it, to fire her father.

– With the help of her husband, Sarita hired a funeral home and tried to say goodbye to her father like all the artist she is. For this they contacted Emilio Estefan, who confirmed that he could not intervene because he was traveling.

– His intention would have been to cream his father's body and spread the ashes between Miami and Mexico.

– When José José was diagnosed with cancer, he operated and began his treatment in Mexico. His older children took care of his care until Sarita arrived and, without further details or inquiries and fewer explanations, took him to Miami.

– Sarita said in his most intimate circle that he saw his father poorly maintained, that he had long hair and nails, and that he decided to take him to put him in the hands of the most advanced medicine in the United States.

– During the year and a half that he survived cancer, little was known about José José, and that sowed many doubts, particularly due to the sudden lack of communication with his eldest children. But this was not the first time there was a distancing. In fact, on many occasions José Joel and Marysol accused Sara, the singer's last wife, of taking him away from them.

– The relationship between the brothers was increasingly broken until almost null. Something that was further enhanced after the death of José José.

– Did Sarita hide his father's whereabouts? No, from the beginning she would have told her brothers where she was. Only Florida law says that spouses have more rights than children. It was Sara mother who signed all the papers, and only she could give permission to anyone to see the body, and not Sarita.

– The meeting between brothers was achieved through the Mexican consul, Jonathan Chait Auerbach, as the government of Andrés Manuel López Obrador made everything available for the remains of José José to be transferred to his native country for tributes and burial, becoming financially charge of all this.

– After the lawyers, the government of Miami and that of Mexico intervened, Sarita, who at all times would be being advised by her husband and the pastor of her church, agreed to a meeting at the Mexican consulate with her brothers.

– Reaching that reunion was not easy. There were pressures from both sides, until it finally happened. Prior to what the world saw of the embrace and the crying, there was a closed meeting where there would have been a very heated negotiation until finally an agreement would have been signed that would indicate, step by step, what would be done from that moment until give eternal burial to José José.

– The agreement would have established that the three brothers would lay down arms, fight would end and both would give the same speech on reconciliation. The older brothers could see the remains of their father immediately and on Friday, as we told you on Monday as a scoop, the farewell would begin at a wake in Miami, which would be divided into two parts: a private one with a list of guests and A second most popular part.

– On Tuesday José José's body, along with Sarita, her husband and Sara, via the Mexican government, would be transferred to their home country where they would be preparing a mass farewell and with all the honors they deserve and then be buried next to his mother.

– The agreement between brothers would end that burial and there could also end this esta reconciliation ’or truce between them and could start a tough legal battle between them.