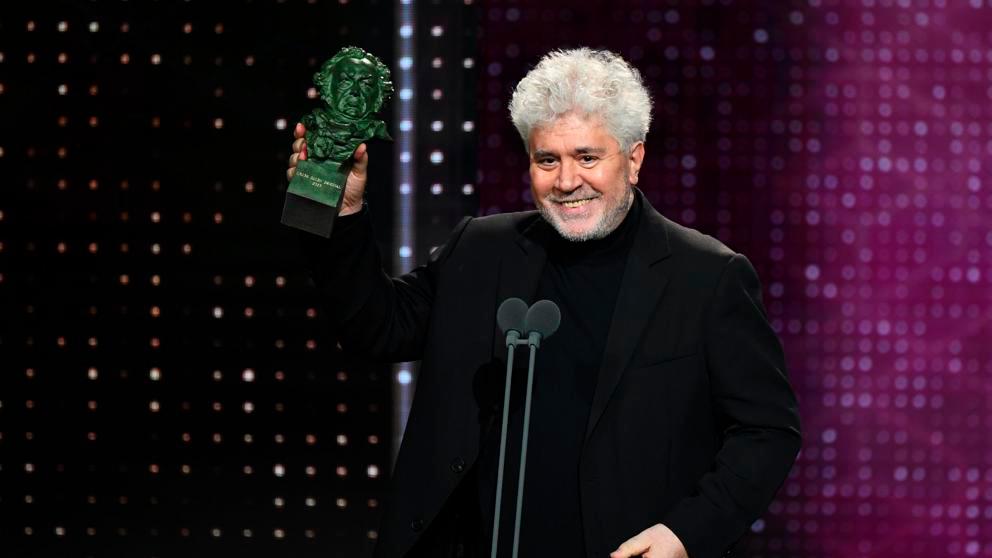 Pedro Almodóvar, one of the big favorites in the 34th edition of the Goya Awards of Spanish cinema, on Saturday picked up the prize for the best original screenplay for "Pain and Glory", his most personal film.

'I realized that I was writing about myself and the passage of time … I didn't know if I was going to continue because I wasn't sure I wanted to expose myself to that point. But I continued, and now I'm very happy, 'said the Manchego director to accept his trophy.

"Pain and glory" took two other awards in the early hours of the night: for a better montage, and better original music, by Alberto Iglesias, the most successful composer of Spanish cinema, who achieved his 11th Goya.

Benedicta Sánchez, who made his film debut at the big door at age 84, won the first prize of the night, for best revelation actress, for his work on "O que arde" ("What burns").

“Life gives you surprises and this is a very big one in all my long existence,” said a nervous Sánchez, who thanked her daughter for having presented her to the casting of the Oliver Laxe movie, an independent film shot with non-professional actors in The Galician mountain.

At his farewell stage, Sanchez asked his grandchildren to "don't forget the yaya."

Alberto Ruibal, author of the song “Intemperie” of the homonymous film by Benito Zambrano, won the award for best original song. Ruibal, who sent a message against child abuse, the film's central theme, closed his thanks by interpreting the verses that earned him recognition.

The gala began with a musical number starring rapper Rayden, actress Ana Mena, and comedians Andreu Buenafuente and Silvia Abril, the conductors of the ceremony, which reviewed the origins and evolution of cinema in Spain, with a special nod to the emergence of digital platforms and the political and social situation of the country. It featured luxury cameos from several of the nominees.

Alejandro Amenábar and Almodóvar arrived at the gala as the maximum nominees. The first, with a film about the beginnings of the Spanish Civil War, received 17 nominations. The second is postulated in 16 categories with a film inspired by his own career starring Antonio Banderas as the worn filmmaker Salvador Mallo. Both Almodóvar and Banderas will compete in two weeks for Oscar awards, for best international feature film (category formerly known as best foreign language film) and best actor, respectively.

Like every year, Latin American cinema has a section in the Goya. The Chilean “Spider”, a film by Andrés Wood about three friends who commit a political crime in the 1970s, and “The awakening of the ants”, a co-production between Costa Rica and Spain directed by Antonella Sudasassi that addresses the pressures that receives a woman to be a mother again, they are among the candidates for best Latin American film.

They compete with the Argentine-Spanish "La odisea de los giles", by Sebastián Borensztein, on the revenge of a group of friends who suffer a scam in the "corralito" of 2001 in Argentina, and with the Colombian "Monkeys" by Alejandro Landes , a survival story centered on a group of young soldiers and rebels who must take care of a kidnapped foreigner.

If something stands out "Dolor y Gloria" over its competitors is that Almodóvar has managed to place all its main actors, commanded by Banderas and Penelope Cruz, in the race to take a "big head" home.

Banderas, who left empty in his five previous nominations but holds a Goya de Honor, competes with the actor with the most nominations of Spanish cinema, 14, Antonio de la Torre, for “The infinite trench”; Karra Elejalde, for "While the war lasts", and Luis Tosar, for "Who kills iron." Cruz will face Greta Fernández for "The daughter of a thief", Belén Cuesta for "The infinite trench" and Marta Nieto for "Mother."

The Goya de Honor is for Pepa Flores, Marisol, one of the great protagonists of the night despite her absence. After a successful career as a child prodigy in which she starred in films in which she also sang and danced, Marisol turned away from the spotlights 35 years ago. His daughters, María and Celia Estévez, confirmed on the red carpet that they will receive the award in their name.

His songs, in the voice of his daughter Celia and Amaia Romero, will be part of the soundtrack of the evening. On the stage of the José María Martín Carpena sports hall, converted to welcome the hundreds of guests to the ceremony, Pablo Alborán or Jamie Cullum also went up.