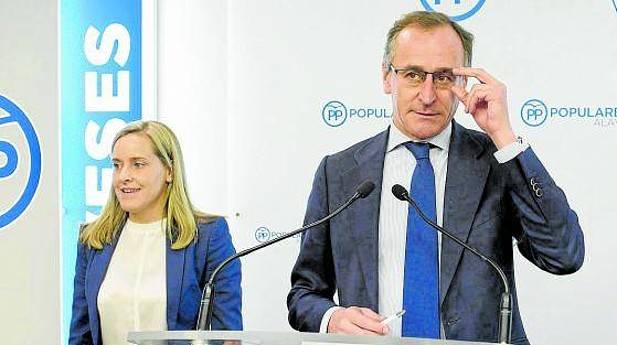 Donostia- The CP of the CAV broke down yesterday the tax reform that it wants to implement in the three territories and that is a sine qua non condition to facilitate the approval of the budgets of the Government of Iñigo Urkullu for the last exercise of the legislature. In the line marked after the convention held last month by the conservative formation, its president, Alfonso Alonso, went out yesterday to present his proposal marking a moderate profile, fleeing “to stir nationalists against non-nationalists”, defending Araba's own taxation , Bizkaia and Gipuzkoa, and liberalism as an economic argument.

The proposal of the PP, which would be approved in 2020 and would affect that same year and the following one, proposes taking advantage of the good tax collection of the last years to reduce the income tax to average and low income by about 1,200 euros per taxpayer. The measure would mean stopping to enter about one billion euros in two courses but, according to Alonso, it would stimulate consumption, investment and employment, retain taxpayers in Euskadi and, therefore, the collection would rise in the medium term.

The thesis of the PP of the CAV is that the Economic Concert must be used to compete with other autonomous communities, mainly with Madrid, instead of maintaining the current rates and using the fiscal capacity of the three territories to “squeeze people”.

The popular criticized that the PNV does not want to “fulfill the commitment” that, they say, acquired when it agreed with the PP to reduce the Corporation Tax, and that it would contemplate acting on family income. According to Alonso, the Basques paid in 2018 1,000 euros more on average for personal income tax than in 2013.

The reduction of this tax would go from one fork between 23% and 49% to another between 18% and 45%. In addition, it is proposed to increase the deductions for children, for conciliation, for dependency or disability, for the birth of children, for care of ascendants, for age or for self-employed workers. The PP also wants to reduce the rescue of pension plans, eliminate the Patrimony tax, and those of Transmissions and Donations among direct family members, as well as establish exemptions in the Donations tax.

The PP will register its proposal next week in the General Meetings of the three territories and, although it does not have “much confidence” in which the PNV accepts it, it will continue “fighting” and “with the telephone open to negotiate”. All this despite the fact that the jeltzales "are not to negotiate, Ortuzar is rude and aggressive, disrespects everyone and preaches a mandatory nationalism that insults the majority," Alonso said in reference to the speeches of Alderdi Eguna held last sunday.