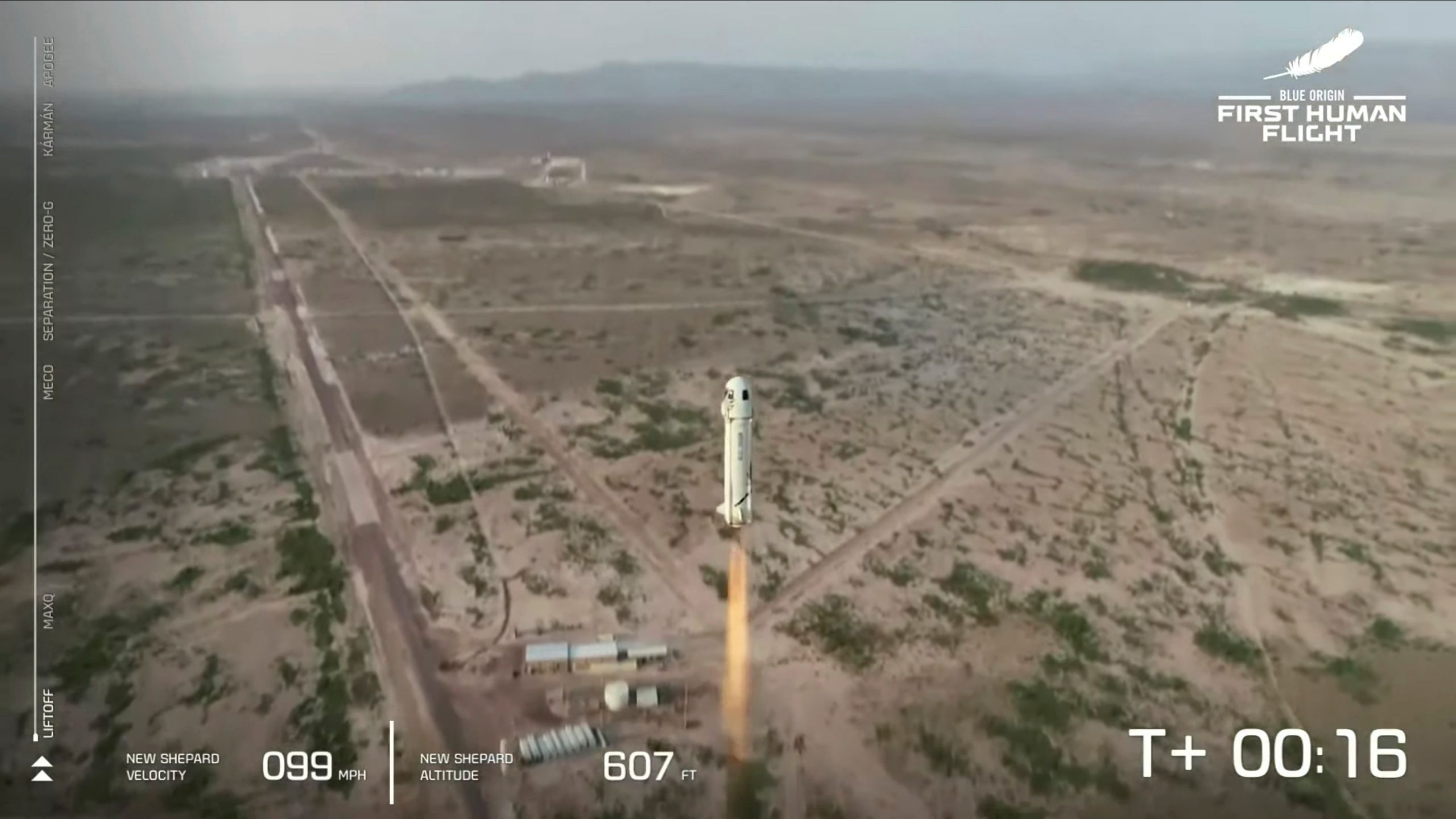 The founder of Amazon and the richest person in the world, Jeff Bezos, took off into space on Tuesday on the first flight of his company Blue Origin from the company’s launch site Launch Site One, in the west Texas desert. Accompanying Bezos in the capsule were the oldest space traveler, 82-year-old pioneer aviator Wally Funk, 18-year-old physics student Oliver Daemen and Mark Bezos, the mogul’s brother. The rocket lifted off at 8:13 a.m. local time under clear skies in Van Horn, Texas, and the capsule separated from the rocket at 8:17 a.m., after ascending at a speed of more than 2,500 kilometers per hour. Amazon founder Jeff Bezos unveils a prototype of the New Shepard rocket capsule in Colorado Springs, Colorado on April 5, 2017.The New Shepard made a perfect vertical landing at 8:20 a.m. Two minutes later, the capsule began to descend and the three parachutes were opened to facilitate its return to land. The Blue Origin website streamed the entire flight and the capsule gently touched down in the desert was seen vividly. On Monday, Bezos told Fox News he was “excited, but not anxious.” “We’ll see how I feel when I’m snug in the seat. We’re ready, the vehicle is ready,” he added. The flight coincided with the anniversary. of the first walk of the American astronauts Neil Armstrong and Edwin “Buzz” Aldrin on the moon, July 20, 1969. The interior of a prototype of the Blue Origin Crew Capsule capsule at a space symposium in Colorado Springs, Colorado, on April 5, 2017.Blue Origin is an American aerospace transportation company founded in 2000 by Bezos, which targets suborbital and orbital flights, both for official United States missions, as well as for private flights. The New Shepard, named In honor of Alan Shepard, the first American astronaut to travel to space in 1961, it is a vertical take-off and landing rocket developed by Blue Origin as a commercial system for suborbital space tourism. ipulation participated in flight training on Sunday that included safety briefings, a space flight simulation, a rocket check and instructions to float in the cockpit when the spacecraft reaches a weightless height. Blue Origin’s New Shepard booster rocket makes a vertical landing at the Launch Site One launch site in Texas on January 14, 2021. Bezos spaceflight is part of a recent trend of billionaires who have developed space travel technologies. into space to experience weightlessness. Nine days ago, British billionaire Richard Branson made a suborbital flight in a special plane of his Virgin Galactic company from New Mexico. Connect with the WABNEWS! Subscribe to our YouTube channel and activate notifications, or follow us on social networks: Facebook, Twitter