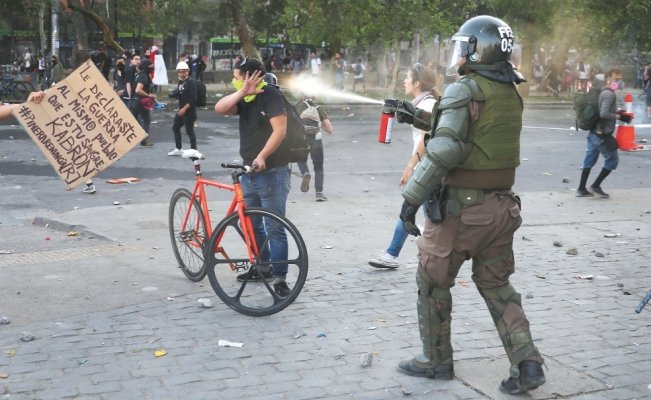 Before the social protests in Chile and Ecuador, President Andrés Manuel López Obrador considered that it is time to change the economic model that was imposed for decades in the governments of Latin America and the world, and that impoverished millions of people.

“It is a general and respectful opinion. It is time to change the economic model that was imposed for decades on peoples and governments of Latin America and the world. The so-called neo-liberal economic model is exhausted, a failure has resulted, then, governments that do not carry out changes and continue with the same policies face problems with their peoples, because people no longer want sacrifices only for the benefit of minorities ” .

During his press conference at the National Palace, the Executive said that privatization policy only benefited small minorities and impoverished millions of human beings, which is why the movements of rebellion and disagreement.

He said that rejecting faccious governments, those at the service of private interest groups, and putting the welfare of the people ahead is what gives governance and allows social peace. He said that in the case of Ecuador they were able to reverse the measure of increasing fuel prices and in Chile recular the increase in public transport.

“I welcome this being done by the leaders of those countries, because it would be foolhardy to hold these measures in blood and fire. The president of Chile (Sebastián Piñera) even apologized, in an act that I consider honesty, a rectification, but in the end it is the same scheme, ”he said.

"No authority can decide on internal policies." Yesterday, the President said that the security policy is defined by Mexico and not other countries, as he pointed out that no foreign authority can decide on internal policies, and said that with the United States there is cooperation for solutions on issues that affect both nations, such as migration, arms trafficking and drug trafficking.

He described as "in bad taste" that officials from other countries give their opinion on internal affairs of Mexico, referring to the statements of Richard Gleen, deputy secretary of state for International Narcotics of the United States, who said he was concerned about Mexico's strategy for Fight drug trafficking.

“Our security policy is defined by us, as they also sovereignly decide their policies (…) they care a lot about drug trafficking; U.S. too; We are very concerned that there is no arms smuggling, we are looking for them to give cooperation in this area. It is moving forward.

“But no foreign authority can decide on our policies, because we do not go to the United States, Canada, China or go to Russia, or go to Guatemala, to any country to tell them what they have to do, because we are a free country And sovereign. That is what should be very clear. ”

López Obrador said that foreign officials should not comment on internal matters that only correspond to Mexican officials to attend.

"Yes, cooperation is needed, but with respect to the sovereignty of each country."

They will spread advances of the T-MEC. López Obrador said that in the next few days he will release a report on the progress his government has made to convince US lawmakers to approve the Treaty between Mexico, the United States and Canada (T-MEC), since he said that It is an agreement that benefits the inhabitants of the three nations.

On another issue, the President said that his government will seek that the assets of the capo Rafael Caro Quintero, as well as other cartels, remain in the country and reach the most needy citizens, this given the intention of the United States government to confiscate the properties of Caro Quintero, released in 2013.

Satelital phone. The President revealed that he recently used a satellite phone to avoid being incommunicado in his work tours throughout the country.

He said that in the case of the operation in Culiacán he was able to communicate with his security cabinet and arriving in Oaxaca only the decision of his government was confirmed.