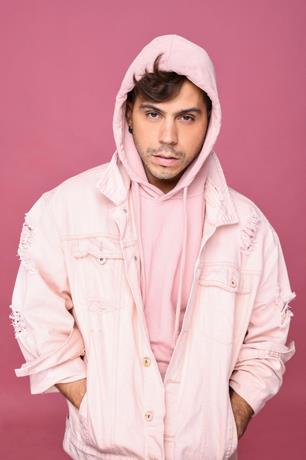 Javier Grullón will now be Javi Grullón, with a diminutive of his first name, an artistic proposal based on urban pop, ballads and romantic songs, and a work team headed by his wife Karla Fatule, as manager, actor and singer starts a new stage of his profession in music.

Last night he officially launched his career in music and released his first single “Thousand Years”, a composition of his and Techy Fatule, which is accompanied by a video clip, in which his wife Karla intervenes as a model and the one that was performed by Arturo Báez, son of the late filmmaker Arturo Báez.

If something makes it very clear Javi is that he does not come to compete with anyone as a singer, and it is that he is quick to clarify that he is prepared for comparisons that will come from the public and the press with his former teammate “Aura”, Manny Cruz, since after dissolving the group continued in the music obtaining an unexpected success.

“I don't come to compete with anyone. My only competition is myself and comparisons with Manny or another artist will not bother me because in the case of Manny, first of all he and I are friends and Manny is supporting me in the project in an unconditional manner. Also when I started acting I was always compared to my dad Kenny Grullón, so I'm used to it, ”he said during a visit to the DAILY LISTIN.

The artistic duality of Javi, who has successfully proven his acting skills, specifically in theater and musical theater, plus the satisfaction he feels with singing, made these last years, after Aura's separation, live in a constant depression from which he left and returned every time he left the stage.

In addition to not feeling full satisfaction with the success achieved in acting, they led him to think and think for years and to wonder if staying in the market just as an actor had been the right thing, if he had always dreamed of singing since childhood.

Javi said that every time the stage curtains went down and a theatrical performance ended, his soul became sad, he fell into a depression, despite having obtained a successful job on the scene. And that emptiness, which he generally felt, led him to reflect and look for the cause of it. Until he discovered that within art he felt incomplete and knew that he had to return to singing because it was what he really loved.

“I don't blame the theater for what happened to me, I missed the music too much, because I come from a group that was very popular, that moved the masses and it was a scandal in social networks, but when I decided to leave it, I left the music to on the one hand, and I think that the emptiness that caused me the music gave me depression, but I knew how to fight it, I hit bottom and I could get up, ”he revealed.

The 31-year-old and who has been in art for 12 years, has prepared to fight in the market. The project has several written compositions, his sister-in-law Techy has collaborated with some. He has been involved in the production of music and in the concept that will identify him. "I wish that my songs unite the couple, the family, that it be music for all audiences with which I can compete in international markets," he added.

“It is not that I feel that I have done everything in the theater, much less accomplished. I feel that I have completed a cycle, for now, both in acting and on television, and as I know that I love to sing, and it is something that I am not inventing, nor did it hit me and thump, but all my friends and my family know that singing has always been my dream, that's why I go after him. ”

On his work on television, he explained that this is not his world and that the program "Chévere Nights" (Telesistema), in which he was part of the cast of drivers, for seven years, was limited to making a character for television.

"It is hard for me to make decisions and two days before I left the program, I quit because I was completely sure that my image would only go on television through the song," explains Grullón.

For the realization of Javi's dream, his wife Karla was the ideologist of the project. She has assumed, with impressive professionalism, according to Javi the creation of it. “Karla is a hyper working woman. He has just produced the festival I can too and has an extraordinary creativity, ”he reveals of his wife.

For their materialization "they put hands" on their savings and with the help of another investor the singer's career will have a good flight attendant.

“For example, when I write a song, I sing it to everyone in the house and if Noah and Teo like it, I'm sure it will be a success. Later, many things will come with my wife and my children, ”he said.

TALENTS
Singer and actor. In this project Javi has the advantage, that in addition to having his vocal qualities, he is also a leading actor, an advantage that he will have when performing the songs on stage.

“Music is entertainment, when you sing you have to tell a story, I have to make the audience believe what I tell in my song. Music is a feeling that people have to live it. ”