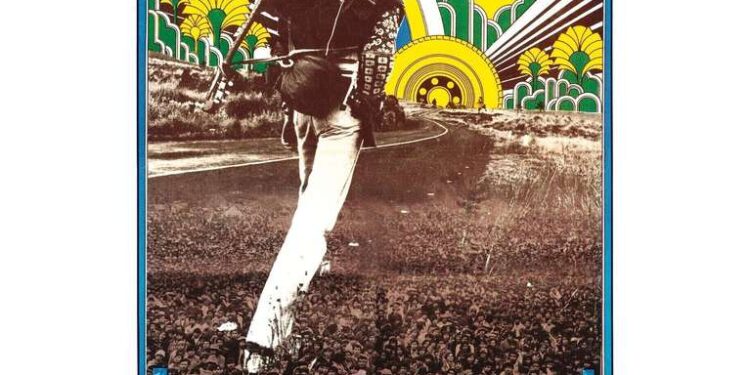 In this image provided by Ediciones del Lirio the cover of “Avándaro 50 years. When Mexican rock lost its innocence” by Luis de Llano Macedo. (Editions of the Lily via AP)

In this image provided by Ediciones del Lirio the cover of “Avándaro 50 years. When Mexican rock lost its innocence” by Luis de Llano Macedo. (Editions of the Lily via AP)

MEXICO CITY (AP) – Its name immediately refers to pop music and television. But half a century ago, producer Luis de Llano was one of those responsible for organizing the Avándaro festival, a modest Mexican version of Woodstock that managed to attract some 250,000 attendees when they barely expected 2,000, and that helped usher in the rock genre. at the national level.

In his book “Avándaro. 50 years. When Mexican rock lost its innocence ”, published on Saturday by Ediciones de Lirio, De Llano recalls the chaos of the organization, the days that the festival lasted and, above all, the scandal and censorship that fell on the event held on Saturday September 11, 1971 in a wooded valley 150 kilometers (93.2 miles) from Mexico City.

“After the concert was over, the full power of the league of good manners, government power and public opinion and the tabloid media fell upon us. Everyone, except the young people, tore us to pieces, ”writes De Llano.

Being young in Mexico at that time was dangerous. When Avándaro happened, the wounds from the massacre of students of October 2, 1968 in Tlatelolco and the so-called “halconazo” of July 10, 1971, when a paramilitary group created by the government violently repressed a youth march were still fresh. .

“For the government, then, seeing any young man with long hair, a beard and flared pants was a danger for Mexico. Any meeting of more than 10 people, they repressed it. And seeing 250,000 people gathered for non-political reasons, of course it disturbed them, ”he writes.

Most of the videos that he and his team took in Avándaro were confiscated by Televicentro, now Televisa, and sent to a warehouse in Tijuana, where all the compromising material that should not be disseminated went, De Llano said in an interview. recently with The Associated Press. No one knows if the tapes still exist or what their final destination was.

The Monday after the festival, De Llano met with Televicentro’s top executives, including its president, Emilio Azcárraga Milmo and Jacobo Zabludovsky, the journalist who hosted the country’s main newscast for 27 years, to review the videos. They did not like the material, despite the fact that the television station itself had promoted the festival.

Editing, he says, was wonderful but was lost. “We no longer find the tape afterwards. It must be lost in the News. The problem is that the videotape degrades. Those tapes were collected from me and they were taken to a warehouse somewhere in Tijuana and they were lost, or spoiled, ”he laments.

De Llano organized Avándaro, originally, as a car race, but then he came up with the idea of ​​having live music.

“We asked permission to do a car race with music and suddenly I invented that I wanted to do a concert and started inviting groups, and after a while there was no race. There was rock, but there were no wheels, ”he recalls.

The call exceeded them and, in their opinion, the press coverage was not the most fair. Although the race was scheduled for Saturday, people began to arrive from Thursday. In a short time the food and water ran out, but the public resisted until Sunday 12.

“I made the mistake in Avándaro of inviting the entertainment press and not inviting the first section. When I returned, they tore us to pieces because everything that the press put … The truth is that there were many people, 250,000 people, gathered for non-political reasons, “he says.

De Llano laughs at the exaggeration, but it is part of the Avándaro myth. In his book, he reflects that the festival had such an impact that many people who did not attend said that it was to impress unbelievers.

“The kids were only looking for that freedom they wanted to have, to remove that wound they had on their skin from ’68, all those fights that had happened,” he says.

In Avándaro there were no big names like in Woodstock; The local artists of the time appeared and it was one of the platforms of the Mexican rocker Alex Lora, the leader of the band El Tri, which at that time was called Three Souls in My Mind. For Lora, Avándaro is extremely important. There he met his wife Chela Lora, from whom he has not separated since.

For young people and artists, the festival represented an opening moment. But the government took the festival as a pretext to begin a period of repression of rock with massive banned concerts in Mexico City, which led to bands like Queen performing in Monterrey and Puebla, but not in the capital, in the decade 1980.

“10 years of darkness began, of punishment, against Mexican rock, which was taken to the funky holes, to the clandestine,” laments De Llano. “It was not forbidden, but they stopped the evolution of the music that was going to be in Mexico.”