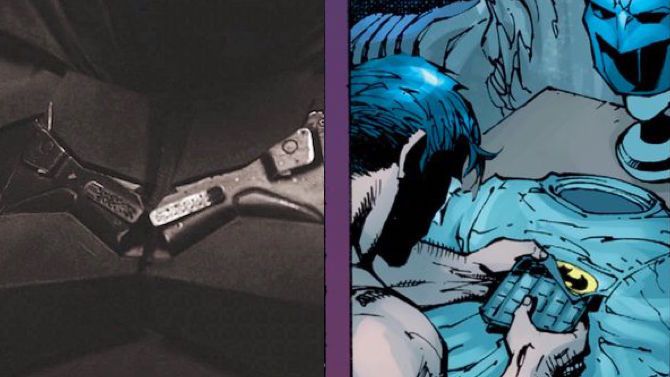 Last week, Matt Reeves dared to compete in popularity against the release of Billie Eilish’s theme for the new James Bond movie and revealed camera tests of The Batman that show Robert Pattinson’s appearance as the next Dark Knight. Pectoral plate of the new Batman suit has its explanation in the DC comics. (Images: Vimeo – Matt Reeves / DC Comics) More Well, those images (accompanied by the fantastic soundtrack by Michael Giacchino) have already gone around the world and we have recently known that they contain hidden and crucial information to understand the approach of the new Batman So, first of all, let’s take a look again: Where we have to stop is in the Batman symbol that Pattinson will wear on his chest (an image below we show you without red light, for clarity). We can appreciate that, as previously said, it is made of worn metal parts – relatively rustic and homemade materials, for which billionaire Bruce Wayne has accustomed us. An aesthetic finding: the pistol pieces deployed to represent the wings of the Batman Bat symbol. (Image: Vimeo – Matt Reeves) More Having said that, a more detailed look reveals the probable origin of these metal pieces: they look like pieces of a gun! Remember that Batman has always despised firearms, so incorporate them Your armor should go against its principles. But comic book fans are well aware that this strange inclusion in the Dark Knight’s outfit has a direct precedent in graphic stories – where Bruce Wayne decided to embed the gun as a reminder of the innocent lives that will be lost if he does not fulfill his mission protective And that’s not all, because the gun in question would not be any one, but just the one that put Bruce on the road to becoming Batman: the weapon that Joe Chill used in a dark alley to end his parents’ lives. parents, Thomas and Martha, when he was just a child. This is confirmed by filmmaker Kevin Smith in a tweet where he recalls that he was the scriptwriter of a Batman story that told exactly this: “As the author of a story by cartoonist Jim Lee in Detective Comics # 1000, I pray to SMod why this is true, ”Smith replied to a tweet that read:“ Pieces of the gun that killed his parents, that is metal of the h **** a. ”Indeed, as can be seen in the cartoons that Smith shares in his tweet, the filmmaker and screenwriter could be proud to be the origin of this curious addition to Batman’s armor – something that, on the other hand, would reveal a deep knowledge of the character by director Matt Reeves and his co-writer Mattson Tomlin . To us, it simply seems a brilliant resource to remind us of Batman’s origins without needing to tell us for the umpteenth time.On the other hand, some have pointed out a multitude of influences and references in the new Batman suit (which, as Pattinson confessed to Variety , made him feel “immediately powerful”). The shield of the chest and the men remembers notably to the video game of 2013, Batman: Arkham Origins, while the hood seems composed of a more flimsy textile material, similar to the Batman of yesteryear. According to what we learned thanks to Batman on Film last month, the suit will have been manufactured entirely by Bruce Wayne (without the inventiveness or the gadgets of a Lucius Fox) and will be completely different from what was seen in previous films.Read moreWith Pattinson as Batman , Zoë Kravitz as Catwoman, Colin Farrell as The Penguin, Paul Dano as Enigma / Riddle, Andy Serkis as Butler Alfred Pennyworth, Jeffrey Wright as Commissioner Gordon and John Turturro as Mobster Carmine Falcone, the shooting of The Batman began in London on January 27 and its premiere is expected on June 25, 2021. More stories that may interest you: