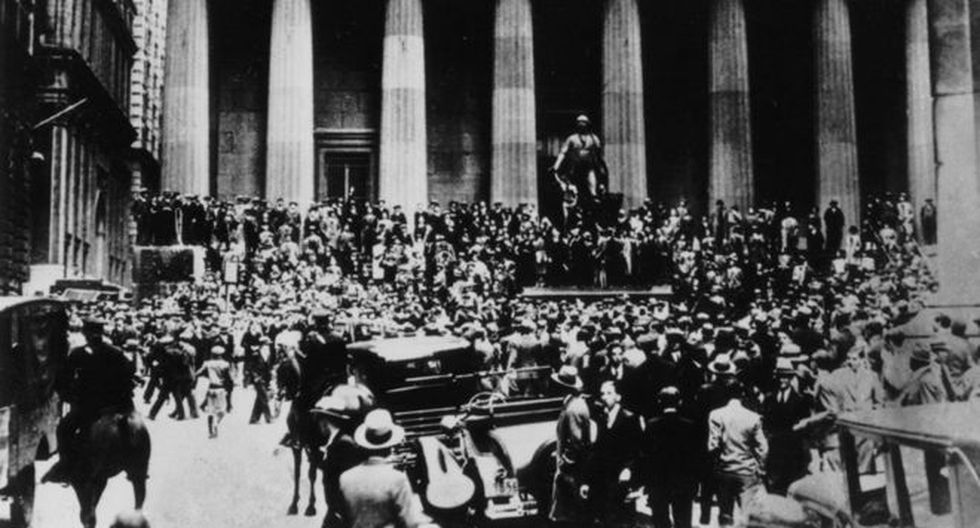 The most important building on the street, the New York Stock Exchange, did not open its doors until 10 in the morning, but large crowds had already gathered there.

This was not good news. It was not a party or a parade. On the contrary, the atmosphere was full of worry, fear and panic.

In the last trading hour of the previous afternoon, the financial market had collapsed, with 2.6 million shares sold in a chaotic wave of business.

► Elections in Argentina: What are the exchange limits established by your Central Bank?

More than a surge, it was a hurricane.

The visible concern in the streets of lower Manhattan, the next morning, was understandable.

The market maintained its downward spiral for the rest of that week and the next.

On Monday, the stock market fell 12.8%. On Tuesday – a day that would become known as Black Tuesday – an additional 12% drop was recorded.

Those who had gathered last Thursday to show concern were now dejected and shattered.

This is how the New York Stock Exchange operated on Friday, October 25, 1929. (Foyo: Getty Images)

As The New York Times reported, the sense of resignation on Wall Street, with the reality of personal financial ruin, was omnipresent.

"There were no smiles. There were no tears either. Only the camaraderie of the suffering companions. Everyone wanted to tell their neighbor how much they had lost. No one wanted to listen. It was a story too repetitive," read the newspaper.

Why did the Wall Street Crack happen?

No one could claim to have foreseen what happened during those six days, in October 1929.

For several years, the US He had a good run.

Unlike the other industrial nations, which after World War I suffered serious damage or were about to explode economically, USA. He emerged relatively unscathed, financially speaking, thanks to his late entry into the war.

The next decade saw a tremendous transformation, both industrial and cultural, from coast to coast.

“The 1920s not only sang to the rhythm of jazz and danced to the beat of Charleston. He roared with the confidence and optimism of a prosperous era. ”

The joy and optimism of the 20s vanished after the Wall Street Crack. (Photo: Getty Images)

During "the crazy twenties", industrialists and bankers became heroes of the nation, in addition to being admired for the wealth they had created.

And the average American had a small fortune of his own. It was Charles Mitchell, the president of the National City Bank – and, therefore, one of these admired figures – who allowed access to such prosperity.

Mitchell was inspired by the success of the "freedom bonds", which had been issued to the public during the last two years of World War I as a way to finance the Allied war effort.

Promoted by cultural icons such as Charlie Chaplin and Al Jolson, the public, seeing that disbursement as a patriotic duty – especially when they obtained up to 4.25% interest – was thus introduced in the notion of investment.

Although they were signed by the government, the success of the freedom bonds meant that, at least for public opinion, putting savings in stocks and shares in the financial market was considered respectable, when until then it had been considered a risk.

Mitchell opened broker offices across the country to satisfy and further encourage this foray into the s tock market.

In the mid-1920s, three million Americans owned shares, seduced by the magnetic attraction of enriching themselves in such a simple way.

The market was on the rise. For example, if an investor bought shares in the Montgomery Ward chain of stores or the utility company General Electric in March 1928, he would see that his money doubled in just 18 months.

Many Americans bought shares of companies like the Montgomery Ward store, and made fortunes before the Crack. (Getty Images)

The gold rush was irresistible, even for conservative and previously firm businessmen.

"The market was delighted," says Blumenthal, "part of a thriving and exciting moment that seemed to continue forever. Politicians, professors and businessmen proclaimed that this was a new era, where the old ups and downs no longer applied."

What were the warning signs?

While the bubble continued to expand, no one seemed to pay too much attention to what was really happening.

Most Americans bought "margin" shares, that is, partly through loans from brokers.

In some cases, up to 90% of the purchase price was lent. If there was a considerable market decline, the average investor had a lot to lose.

And beneath all that excitement was a fragile house of cards.

Before the collapse, at the end of October 1929, prices had dropped slightly the previous month. But he didn't pay much attention.

Experts believed that ventilating a red-hot market a bit was not a bad thing.

The sharpest investors took advantage of these lower prices. After all, after every previous bump in recent years, the market had always regained its previous position.

The cover of the newspaper "Daily Mail" of October 25, 1929, with the title: "The biggest fall in the history of Wall Street". (Photo: Getty Images)

Those six days of October were far from being a bump. They gave an almost fatal blow to the US economy as a whole and a final fatal blow to millions of personal finances.

It was difficult for the industry to trade, since the belief in the concept of credit and the credibility of the banking system had been shattered.

The struggle to get money to continue operating and pay salaries was intense.

Manufacturing was reduced as a result: after three years of Crack, automobile production – a symbol of the good times of the 1920s – was about a quarter of what it had been.

Unemployment also increased dramatically. Six months after the events of October 1929, the total unemployed had more than doubled to 3.25 million.

They were desperate times. "The descent came in stages," wrote historian Hugh Brogan.

"The loss of a job, the search for another in the same line, the increasingly frantic search for work in any field."

"The first appearance in line to receive social assistance, where, surprisingly, you knew dozens of other honest men who had followed the rules, worked hard and now had fallen as low as the vague professionals," he wrote.

The rural unemployed moved in mass to find work. In these times everything was economic uncertainty. The very fabric of American society began to fray.

Unemployed men queue in front of a community canteen in New York during the Great Depression. (Photo: Getty Images) How did the Wall Street crisis affect the US economy?

The Wall Street Crack was not the cause of the Great Depression, but it did start.

It was the equivalent of a heart attack suffered by someone with high blood pressure.

The economy had a preexisting condition, an underlying weakness. But his subsequent care, as administered by or not by President Herbert Hoover, was insufficient.

The Republican president was reluctant for the government to enter the crisis, believing that a more laissez-faire stance would encourage companies and banks to straighten the economy.

His reserved nature did not help his argument, and he was ridiculed for appearing that he did not care enough for his fellow citizens.

Those hit hardest by the Great Depression, whose homes were seized, lived in slums that the president's critics dubbed Hoovervilles.

It was no surprise that, in the 1932 presidential elections, Hoover was removed from office. His successor, Democrat Franklin D. Roosevelt, won with 57.4% of the popular vote.

The mandate that granted him his strong victory, along with the great majorities that the Democrats obtained in both houses of Congress, allowed a courageous fight against the plight of the country.

A partisan act of Roosevelt in Indianapolis, in 1932, with a sign that says: "Eliminate the line to receive social assistance, vote for Roosevelt." (Photo: Getty Images)

After Hoover's failure, the public clamor for the government to intervene was deafening.

In his inauguration, in March 1933, Roosevelt tried to reassure and unite a divided population.

"The people of the United States have not failed. In their time of need, they have declared that they want direct and vigorous action," he said.

"Our main task is to put people to work. This is not a problem without a solution if we face it wisely and bravely."

"It can be achieved in part by direct recruitment of the government itself, treating the task as we would treat the emergence of a war," he said.

The effect was instantaneous. "In a few minutes," Brogan wrote, "Roosevelt did what Hoover had not been able to do for four years: he returned his hope and energy to his countrymen."

"By the end of the week, half a million letters of thanks had arrived at the White House, the first waters of a flood that would never dry out."

How did Roosevelt's “New Deal” combat the effects of Wall Street Crack?

In his first 100 days in office, Roosevelt kept his promises.

Roosevelt returned the optimism to the Americans after the worst economic crisis in its history. (Photo: Getty Images)

That vigorous and direct action came in the form of 15 main laws aimed at creating jobs and restarting industry, the economy and, symbolically, hope.

The legislative advances he made were rapid and considerable.

The Emergency Banking Act aimed to stabilize – and therefore restore faith – in the banking system, through the introduction of federal deposit insurance.

Meanwhile, the Federal Emergency Assistance Administration offered support to the poor in the form of blankets, soup kitchens and employment opportunities.

Work was also offered to those who enrolled in the Civil Conservation Corps (CCC), which placed the unemployed in camps for six months, working on conservation projects and earning US $ 30 per month.

Additional work was offered through the Public Works Administration, created to improve the country's infrastructure.

Roosevelt's program, known as the New Deal, was revolutionary in the way it placed the federal government – until then almost invisible in everyday life – at the heart of the nation's recovery.

The project to rebuild the US, both materially and psychologically, was impressive, but the nation was not completely united behind the cause.

The Civil Conservation Corps (CCC), created by Roosevelt and his "New Deal", employed 2.5 million men between 1933 and 1942. (Photo: Getty Images)

Some Democrats felt that it was not as far and deep as it could have gone, while many Republicans, echoing the position taken earlier by Hoover, felt it was an inopportune and invasive repositioning of the role of the "great government."

Regardless of how energizing the New Deal was for the nation, it did not resolve the Great Depression.

Productivity could not be revived in the way Roosevelt expected, while unemployment remained high during the 1930s.

However, his success – measured by three other victories in presidential elections – was in terms of motivation and inspiration.

The Great Depression ended due to events that were beyond the president's control.

When the Japanese bombed Pearl Harbor in 1941, forcing the US To enter World War II, the economy recovered late.

To supply the troops abroad, productivity in the manufacturing and agricultural sectors expanded rapidly, creating millions of jobs.

And so the prosperous moments would return.