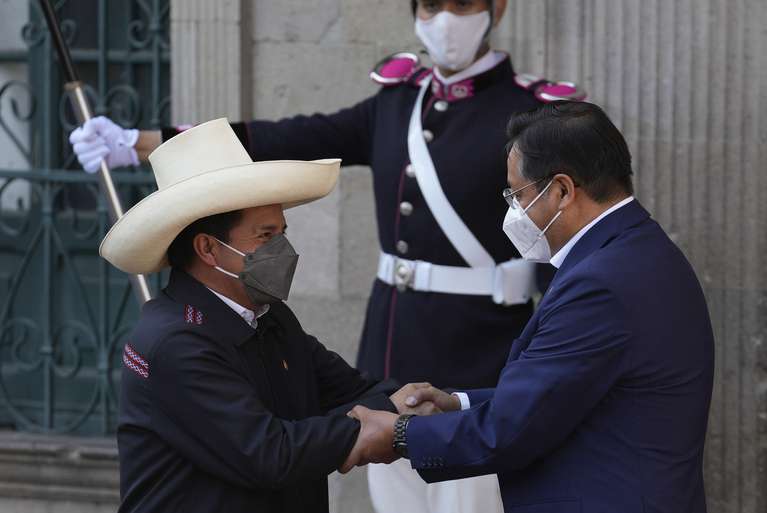 LA PAZ (AP) – Bolivian President Luis Arce and his Peruvian counterpart Pedro Castillo agreed on Saturday to improve the living conditions of their citizens on the common border, at the end of the sixth Binational Ministerial Cabinet Meeting.

The leaders met at the Government Palace and then presided over the binational meeting in which they sealed 10 agreements. Castillo told the media that they seek to “strengthen commercial and tourist relations, the facilitation of the transit of people, goods and services, education, as well as the transnational fight against drug trafficking and illegal mining.”

“We have put … special emphasis on improving the living conditions (of the people) who live on both sides of our borders,” added the visiting president. Among them, speed up projects so that Bolivian gas reaches southern Peru.

“Offer affordable prices of liquefied petroleum gas (LPG) to the population of the south,” adds the document signed by both leaders. In add ition to the sale of urea for agricultural use.

It was also agreed to promote the port of Ilo for Bolivian cargo in the interest of the Bolivian government to increasingly use Peruvian terminals in the Pacific.

“To think of Peru is to connect ourselves to the Pacific Ocean, it is to project and expand our trade through the port of Ilo, it is to work together in fifth generation communications,” Arce said at the conclusion of the ministerial meeting. “We are very hopeful in developing mechanisms that facilitate border transit and trade.”

The Bolivian government seeks to make this a greater option with respect to the Chilean ports through which the country’s exports leave. Bolivia is a Mediterranean country.

The fight against the contamination of Lake Titicaca, which is shared by both nations, was also agreed, as well as the fight against drug trafficking and smuggling, it was indicated.

Arce decorated his colleague from Peru with the medal of the Condor of the Andes in the highest degree.

“The Condor of the Andes that I carry on my chest symbolizes brotherhood and the future of our nations,” concluded Castillo, who arrived in La Paz on Saturday morning and returned to his country in the afternoon.

The governments of both countries resumed their work agenda after two years of inconvenience due to the health and political crisis. Before that, the then Peruvian presidents Martín Vizcarra and the Bolivian Evo Morales signed 12 agreements in the areas of energy, security, integration and the environment.

The binational meeting was agreed at the end of July after the Peruvian president took the oath of office in Lima.