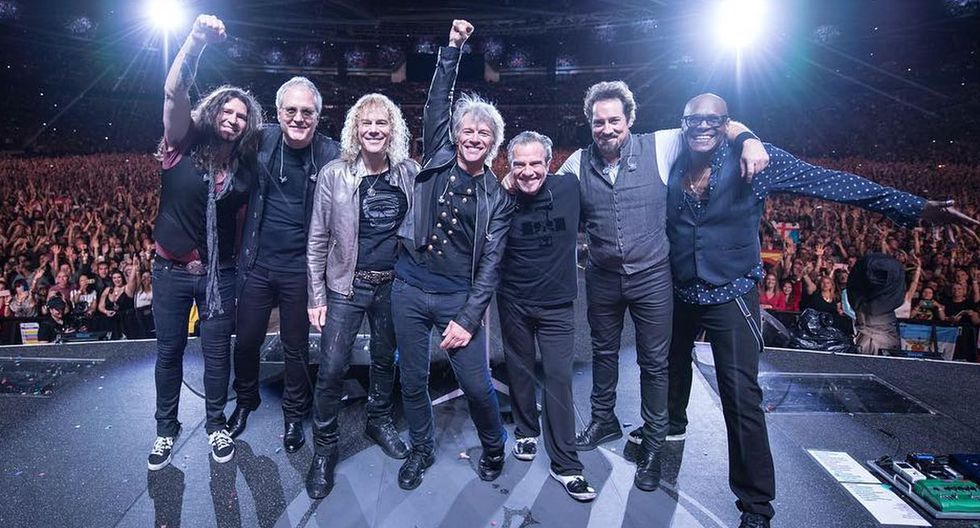 The announcement of the return of Bon Jovi caused surprises: Goo Goo Dolls opened the concert and his presentation was going to be at the National Stadium, a larger venue than his first visit to Lima. Finally – and perhaps most importantly – the capital was the last city of This House Is Not for Sale, a promotional tour that bears the same name as its thirteenth studio album. Logistics in José Díaz was good: cameras in strategic places that captured everything that happened on stage and then projected it on the three giant screens. A catwalk that gave the public more proximity to the artist. A good system of lights and audio. All ready to receive two luxury bands. What could go wrong?

Goo Goo Dolls took 15 minutes to go on stage. John Rzeznik, the boy whose cut used to cover his right eye, appeased with a big smile. It was the first time that, together with the band, I visited Latin America and had already heard that we tend to be demanding. There were 14 songs that the band offered to the audience, Iris being the most – not to mention the only one – toned. I thought that, being a great band, there would be a better response.

Before continuing, I must make a confession: I was lucky enough to attend the Bon Jovi concert in 2010. Jon's vocal level was another at the time. He even danced in several songs. The public was quite energetic and the closure was masterful: with fireworks included. For this presentation, I had in mind that the band came from Rock in Rio, a festival where demand is much higher. I knew that the energy was not going to be the same.

The musicians from New Jersey left 9:30 p.m. and started with This House Is Not for Sale. Attendees, of course, took out cell phones to try to record the start of a concert that aimed to be masterful. Trying to compensate for the absence of nine years, they continued with Born to be my baby. Attendees kept pace, but noticed something – which later began to comment between songs – in Jon's voice. In the finals it didn't matter, we had in front of a legendary band.

The problem was that every time Bon Jovi played not-so-popular songs, attendees didn't sing. It's that hard. That disappointing. Who writes this note was on court 1, right side. The band could see us without problems and we to them. They realized the coldness of those who were close. Personally, the most embarrassing moment was in Wanted dead or alive. A song that was released in 1986. Year in which this editor was not even born, but had heard long ago. It is in the top 5 songs of the artist on Spotify. With that humor that characterizes the vocalist, he even asked, after the first chords, if they knew the song. He let the audience "sing" the first stanza. At least, those who were around and in front of me didn't chant. They just looked.

It is not a rule to know the entire repertoire of an artist to attend a concert. Sometimes, you usually gain more followers when they listen to you live. If Bon Jovi was on tour promoting a record, the least we could do was listen – at least – a couple of songs. It is the only way to let a musician know that we support his work. In times where YouTube, Spotify, Apple Music and other music platforms exist, there is no excuse for not listening to your new projects. To say that the radio is to blame for passing the usual songs – as users on social networks point out – is not justification.

It is true that Captain Kid no longer sings as before. At times he seemed to recite the songs. In several parts of the concert he relied on his musicians, who did an extraordinary job. In more popular songs like Livin’s on a prayer, We Weren’t Born to Follow, In these arms, It’s my life or Bad Medicine, the audience was there — although it could have been better. The repertoire consisted of 17 songs. He was able to expand the setlist and what better to do it in the last concert of the tour. Have you wondered why they didn't? Maybe it has to do with the physical fatigue of musicians. Playing 98 concerts in 24 countries is not easy. However, I do not rule out that the public has influenced that decision. A shows a button:

That video was posted on his Instagram account after a spectacular night in Rock in Rio. The band played Always in Rio de Janeiro, one of the most requested at the end of the show in Lima and they did not perform. Play the video again and listen. Now I ask, regardless of the song: were we chanting like that? Were we a good audience?

What remains of lesson for future presentations as artists such as Bryan Adams, Muse, The Strokes, Franz Ferdinand, LP, among others are coming. Energy, passion and respect. That is what we have to show. That's what matters.//