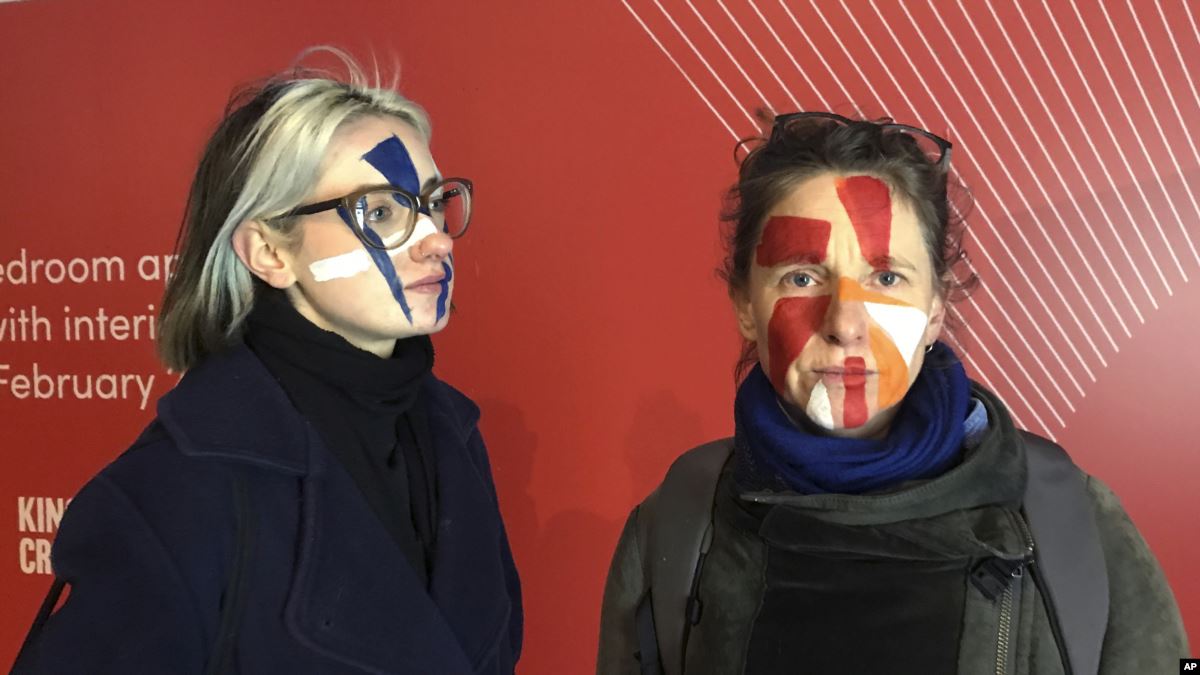 At nightfall in London, Georgina Rowlands and Anna Hart start putting on makeup. Instead of lipstick and eyeliner, the face is covered with geometric shapes.
Elongated blue triangles and narrow white triangles cross Rowlands’ face. Hart shows a collection of angular shapes in red, orange and white.
They are two of the founders of the Dazzle Club, a group of artists formed last year to provoke a conversation about the growing use of facial recognition technologies. The group is named after a camouflage style used for military purposes.
The group holds silent marches once a month in different parts of London to raise awareness about technology, which they said is being used to maintain “widespread surveillance.” They point out concerns such as the lack of regulation of these systems, their lack of reliability and their effect on public spaces.
Some 19 people attended their last act, in Shoreditch, a neighborhood in east London. Anyone can participate in the marches, in which participants must paint their faces in a style called CV Dazzle.
The technique, developed by the artist and researcher Adam Harvey, aims to offer camouflage to face detection systems, which converts face images into mathematical formulas that can be analyzed by algorithms. The Dazzle CV, where CV refers to “computer vision,” uses cubism-inspired designs to circumvent the machine, Rowlands said.
“In a way you try to twist that by applying these random colors and patterns,” he explained. “The most important thing is to have light and dark colors. So we often opt for blacks and whites, colors that contrast a lot, because you try to alter the lighted and shaded areas of your face. ”
During the First World War a similar technique was widely used to camouflage British navy ships and confuse the enemy about the course or location of ships.
To test their designs, they use the simple face detection feature on their cell phone cameras.
“I see that I’m hidden, it doesn’t detect me,” Rowlands said, checking his cell phone to see that a square on his face didn’t appear on the screen.
The rise of facial recognition technology is being tested and spreading in the democracies of the developed world, after aggressive employment in some more authoritarian countries such as China.
Britain has long used cameras in public spaces to counter security threats, and London is believed to have one of the highest concentrations of surveillance cameras. But that acceptance is being tested as authorities and corporations try to deploy a new generation of cameras with facial recognition technology, given the concern of activists, legislators and independent experts in matters of mass surveillance, privacy and reliability.
Opposition to algorithm-based surveillance is not limited to Britain. According to media, Russian activists were arrested last month for a similar protest with their faces painted against the use of facial recognition cameras in Moscow. Prodemocracy activists in Hong Kong regularly use masks in street protests to hide their identity. Rights groups in Serbia and Uganda have opposed government initiatives to install Chinese-made cameras.
Other designers have found countermeasures such as sunglasses that reflect the infrared light of the cameras.
“There is a resistance movement against facial recognition, in which we actively participate and we want to develop more,” Rowlands said.
Rowlands, Hart and two other artists founded the Dazzle Club in August after hearing the news that the London district of King’s Cross, a major transportation hub and where large company offices are being built quickly, secretly experimented with reconnaissance cameras facial without consent or knowledge of the public, which caused a reaction against.
The London police recently began using facial recognition cameras in operational deployments. Last week, a woman wanted for aggression was arrested after the cameras located her in a crowd on a bustling shopping street. Police say this new technology is necessary to keep the public safe, and that images of innocent people are erased immediately.
Public opinion about the face recognition technology in Britain seems to be uneven, according to a survey last year, which determined that most people said they did not know enough about it, although almost half said they should be able to request that I exempted them.
The founders of the Dazzle Club said they are worried about the effects that this technology has on people if the cameras collect their biometric data – in this case, images of their face – without clearly explaining what is done with them.
“We have to adjust our behavior in the public space in a way that seems problematic to me,” Hart said.