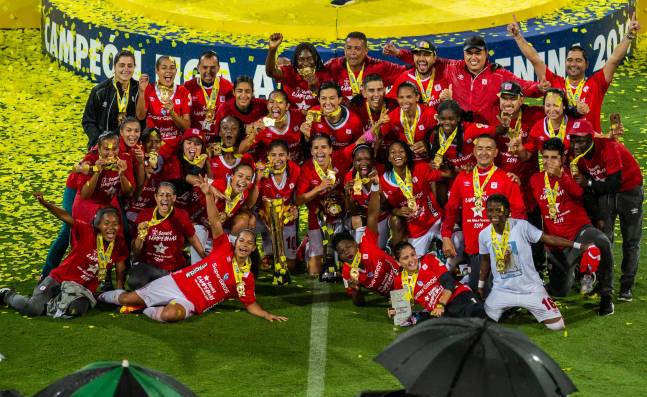 And they succeeded. The 'Red Diablas' went up to the sky on a rainy night, where they left the players of Independiente Medellín cold, after falling 2-1 at the Atanasio Girardot stadium, to leave the global 3-2 in their favor and put their first star on the shield of the women's team of America.

Crying, shouting, hugging, complete happiness on the grass of the Antioquia stage, where Medellín succumbed to the power of the scarlet players, who were not the favorites of the grand final, but got away with it.

He always had the Medellin domain, but had the order America. And that reached him to win the championship of the third Colombian Women's League, where they already left their tracks Independent Santa Fe and Atlético Huila.

There was tension. Of course. It was the final. And the ‘Diablas’ had reached the Athanasius with a 2-0 in their favor, achieved in the first leg eight days ago, in Pascual Guerrero.

Medellin did what he owed. He came out to overwhelm his opponent, with fast play on the sides, with high pressure and aerial balls. But America never lost order. He was cautious and took advantage that the wet court began to despair of the locals.

Read also: This is how the women's Libertadores Cup groups remained, who will America play with?

The Athanasius was speechless in the 20th minute. Catalina Usme grabbed a rebound, raised her head and, with the quality that always accompanies her, saw Linda Caicedo sting through the center to release a ball that the front, scorer of the 'Diablas' ', he knew how to turn into a goal. And what a goal. He bathed the goalkeeper of Medellin with a subtle touch. Party in the red hosts.

Four minutes later the premises were noted. The air ball dispute ended with a foul by Kelly Caicedo on Oriánica Velásquez. Penal. He took the usual, Laura Aguirre, and put the 1-1. With that result the 22 players went to the showers.

In the second part, the rain raged. Medellín was always on top and the terrain became more complicated. A mid-range shot in the 69th minute of Paula Botero became a goal. In goal, rather. 2-1 and the momentum grew in the ‘Powerful’, but it wasn’t enough.

On a rainy night, the "Red Devils" went up to the sky. América, champion of the Colombian Women's League.