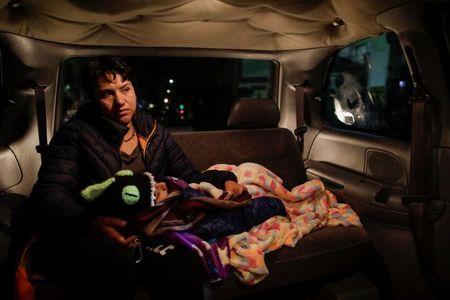 MEXICO CITY, Feb. 17 (Reuters) – Hermes Soto turns five on Monday and will not have a party. He will pass it in the children’s hospital where he should go to receive his fifteenth chemotherapy to treat the cancer he suffers: an aggressive rhabdomyosarcoma in the left forearm.

But Esperanza Paz, her mother, does not know if vincristine, the drug that helps inhibit the growth of cancer cells, will be available or sent back home, in a humble area of ​​Mexico City, as happened in the middle January, when he did not receive his dose due to lack of medicine.

“The concern is that Hermes is already in the final stage of his treatment. We only need two cycles of chemotherapy to finish,” said Paz, who makes a living doing crafts in his small house located in the south of the capital, where He lives with Hermes and his other two daughters, ages 3 and 10.

“(If he does not receive the chemo) it is a total setback. He can make a relapse. The cancer can come back out. The tumor he had is one of the most aggressive and can appear in any muscle of his body,” he lamented, covering himself. The mouth with the hand.

Hermes is part of the dozens of children who are suffering from the lack of medicines for their treatments in Mexico, after the government of Andrés Manuel López Obrador centralized purchases last year through the Ministry of Finance, in order to avoid overpricing and corruption.

Neither the Ministry of Health nor the Presidency responded to requests for comments from Reuters about parental complaints.

So far, the president has given contradictory answers to the shortage: he has denied the shortage of drugs, but he has also recognized him by blaming hospital officials for hoarding medicines and saying that the supply has been affected by problems in China and India.

The shortage is not new. The first cases came to light in May last year. But with the passage of time, it has become more difficult for families to face, many of whom lack the financial resources to buy medicines at any pharmacy.

“Before, the problem (of the shortage) we solved it with a recipe and we could buy it from the outside. But now it was impossible because we did not find (vincristine) anywhere”, complained Paz, whose son already received 28 radiations and went through three surgeries since he was diagnosed in October 2018.

She and other parents of children with cancer have attended meetings with authorities in the Ministry of the Interior and have blocked important arteries in Mexico City to be heard, but the official responses do not satisfy them.

“The President tells us that there will be a total supply since December 1. But cancer does not wait. If we wait longer, what will happen? How many will die? How many will have relapses?” he wondered, while Hermes tried to sing a stanza of “Believer,” by Imagine Dragons, which said “My life, my love, my impulse, came from pain.”

Childhood cancer is the second leading cause of deaths of children in Mexico, according to official figures. Every year, 7,500 new cases arise in the country and an average of 2,300 children die. The Mexican government has cataloged it as a “public health problem” due to the high mortality and the impact on the patient’s relatives.

On the first day of 2020, the government launched the Institute of Health for Welfare (Insabi) in place of the Popular Insurance, which conditioned health care for Mexicans for the payment of fees and their membership.

The president, who assumed in December 2018, has said he wants a public health system such as Canada or Denmark, countries that allocate more than 10% of their GDP to health, while Mexico contributes only 5.9%.

“We have not had a first-rate health system but, since the change of administration, the problem of shortages has grown immensely. There has never been such a big crisis,” said Andrea Rocha, a 26-year-old lawyer who has helped parents with sick children to file for protection to give them medicines.

The amparo is a means of procedural defense that aims to protect the fundamental rights of citizens, established in the Mexican Constitution, against acts that violate the authorities.

Rocha, who works with more than 65 families with sick children, said she was willing to reach international authorities if the authorities do not respond on time.

“We will get to the Supreme Court if necessary. And then, at international levels to force the Mexican State to comply with the delivery of medicines,” warned the lawyer who also collaborates with the leftist Democratic Revolution Party (PRD) .

But not only children suffering from cancer suffer from a shortage of medicines. Drugs for children who have received transplants are also not available.

It is the case of Diana Melo, who is seven years old. At eight months she was diagnosed with chronic renal failure, and soon after, she was a candidate to receive a new kidney. After four years of waiting, in May 2019 he was finally transplanted.

Diana has been in the operating room 19 times, but her mother, Mónica Márquez, says her daughter has learned to live with the disease. While she talks, the little girl plays with her skateboard and some friends in the street in front of her house.

“Diana is doing very well, the situation is that there are no medications,” said Márquez, a 41-year-old social psychologist who makes a living selling crafts.

In his apartment, located north of the capital, Márquez recalled that, since last year, he has felt the shortage of medicines, but he has been able to overcome it because he accumulated some boxes of tacrolimus -immunosuppressant- or by donations. It has also cost him to get mycophenolic acid, another immunosuppressant.

“These are very important medications. With one day Diana doesn’t take it, she could reject the organ,” he said.

Given the shortage, the tacrolimus box went from 2,500 pesos ($ 135) to 14,000 pesos ($ 755); an impossible price to pay every two weeks for average Mexican families, but even more for those with limited resources.

“My daughter can relapse, re-dialyze, go back to the way she was before. And what good is all that has been done, these four years of waiting (for the kidney), so much care?” Marquez wondered.

“I feel that they are minimizing it, that they are trying to cover the sun with a finger when, obviously, there is a very big problem,” he concluded.