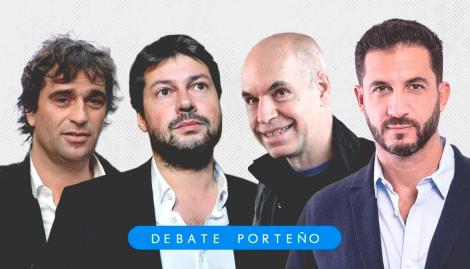 Candidates seeking to stay with the City government debated ahead of the October elections. The current president of Buenos Aires, Horacio Rodríguez Larreta, of Together for Change; Matías Lammens, from the Front of All; Matías Tombolini, of Federal Consensus; Gabriel Solano, of the Left Front – Unity, exposed their platforms in an exchange that had no major crossings than some Chicanas on insecurity.

The applicants developed their proposals in the context of a format that ordered the interventions according to four thematic axes and without the presence of the public.

The beginning of the debate was marked by the presentation that each candidate made of himself. The first to appear was Matías Lammens: "I am 39 years old, I am the son of Esperanza, an immigrant from Spain who arrived in Buenos Aires when I was seven years old. The same age I was when my father died." "It was Buenos Aires the city that allowed them to progress and fulfill their dreams. That is what I want to do if I am Head of Government," summed up the candidate of Kirchnerism who put "health, education, science as priorities of his agenda. and employment. "

Then, it was Tombolini's turn. "I am a professor at the University of the City of Buenos Aires de Economía and I am in a relationship with María. I have three children, three dogs and we live in Almagro. I think that for things to change we have to change ourselves," he said and explained why He left private activity to devote himself to politics. "We are more concerned with teaching fish than giving fish," said Roberto Lavagna's candidate.

For his part, the current president of Buenos Aires mentioned: "You already know me, we meet many times in your neighborhood. Together we work for a better City. I am passionate about 'doing'. What I promise to do I do. but I am passionate about what is missing, "he said and promised to use every minute of the debate to explain his proposals.

It was there that there was a blooper. Guillermo Andino ended the round before giving way to Solano. Laughing, the man on the left took the floor with harsh criticism of macrismo: "I am a legislator since 2017. As a Left Front we have been opponents of this regime of misery that Argentina has." "Macri, Larreta and Vidal are responsible for this situation," he enumerated and took the Buenos Aires election to a national framework. He also called "accomplices" those who voted laws proposed by the PRO and the members of the Justicialist Party "that apply them in the provinces." And he mentioned Kirchnerism in that same line. "We are with the workers, the women and with the youth and they can trust us," he closed.

After the presentation of each candidate, the moderators gave way to the thematic axis round. The applicants had a minute and a half to make their proposals and then received the questions from their competitors.

The first to speak was Solano: "The whole country saw how Patricia Bullrich received with honor the policeman who murdered a kid in La Boca from behind. The easy trigger became state policy. In 26 months the City Police he killed 43 people. We have a police force that applies this repressive, corrupted policy that regent the crime. We never voted for this City police, if Kirchnerism did it. It is now used against social protest. "

Rodríguez Larreta then proposed to place "10,000 more cameras for security." But Solano replied: "We are against it. The City of Buenos Aires is going to be a Big Brother." "We have Patricia Bullrich arresting people on the trains by face bearing. This policy is classist."

Lammens agreed with the transfer of the Federal Police and the creation of the City Police. "We celebrate it," he said. "But it seems that the crime was on the rise. We don't have statistics because they haven't published them." At the same time, he indicated that the Capital is the district with the least complaints in the country, "because it is a cumbersome process." "We are going to create a system so that people can follow the complaint through their cell phone," he stressed and promised to return to Buenos Aires "trust in institutions." "We have the historic opportunity to create our own Justice," he said.

In his speech Solano compared the current president of San Lorenzo with Bullirch. "We don't debate with Chicanas," Lammens asked. "The important thing is how it is formed and how the police are used," he said.

Tombolini made a diagnosis of the autonomy of the City with respect to Nation. He acknowledged that the transfer of the Police but criticized that the Retirement Terminal is not yet under the Buenos Aires authority. "It is a race of obstacles, dirt and robberies," he questioned and proposed that he have "toilets like those at an airport" and "get the subway inside."

"If you talk about insecurity, you have to talk about drug trafficking. What happens at 1-11-14, that you have it near the street," the Federal Consensus candidate told the Front of All. "We know that in 1-11-14 there is the hypermarket of the drug of Argentina," he remarked and suggested the creation of an application of anonymous complaints to fight the drug traffickers.

Rodríguez Larreta said, unlike Lammens, that "all crimes went down" and that the figures "are all public." "But we have to go for more. We are going to put 10,000 cameras with more facial recognition. We know where to put them," he promised. "We are going to double the training time of the police cadets and we are going to add two thousand more police officers," he added. "We have to finish with the revolving door," he asked in reference to the project that works on its management for the creation of an autonomous criminal justice.

News in development that is being updated.-