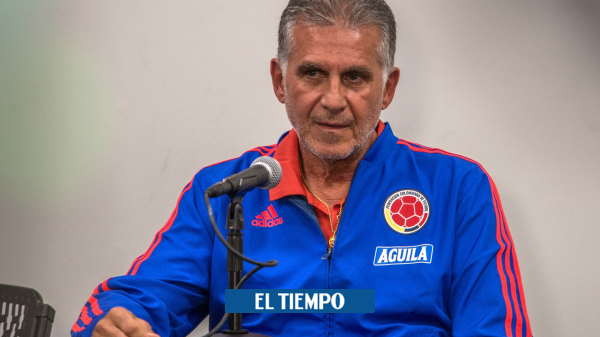 Carlos Queiroz, a Colombian coach, said at a press conference in Spain that he did not call James Rodríguez and Falcao García on his own decision and left behind speculation.

(You may be interested: This is how Colombia's preparation for friendlies in Europe began)

The virtue of Colombians. They are several. Your passion for football and for the Colombian National Team. I also rescue that the players have creativity and sense of risk for the matches. I try to put order, but the virtues are very good.

James and Falcao After the call I was aware of some speculation. that's normal. It must be said that we must not confuse. They are speculations that make no sense. They are two very important players in the memory of the fans. I do not like to talk about players who are not in the call. That is not respectful of those who are.

James and Falcao 1. You have to separate the important from the minor. We must leave the speculation behind. You have to be more independent from Spain. I make the decisions after analyzing the players. The decisions that are made are the best for the team. I never tire of talking to my coaching staff or the players to make the best decisions.

(You can also read: Colombian players talk about the position they would like to be in)

James and Falcao 2. Forgive me if I don't have speculative answers. I have to speak clearly and honestly, the decision is natural in time with the observations. The ones I called are players that respond to the objectives. We seek to consolidate a basic group and always try to keep the calls to fix a cumulative effect.

Barranquilla I work with very experienced players. I remember what 'Pacho' Maturana said: "When you have the ball and you don't put speed on the game, not much happens, but when you don't have the ball, the problem comes." The Colombian team has to be prepared to play. The football that I love to do I would like to do always.

Changes in the call. I did not hide that Colombia should do a job on the issue of archers. Those who are, after Copa América, because the criterion is to give the opportunity to the new ones to meet them and then we will be ready to make the best decisions for the team. That also happens in the other sectors of the field.

Falcao garcia. I speak with my coaches and with the coaches of the teams in which there are Colombian players. If you want to have a good team you have to know about the players. Falcao, you do not know, but I do, that since the 2014 World Cup has been in 55 percent of the calls, failed in the challenge for several reasons. Colombians do not have vacations and that has been a reason to know how to make decisions. I have the illusion of having the best players ready. So decisions are made clearly and without speculation.

Calls If there is not one, there must be a better one. We did not stay to cry. We would love to have Valderrama here, but it isn't. What are we going to do Pékerman or me? The team is more than me, or a, b, c ".

Chile. We have a goal ahead of us: we must improve at all points. You have to get brighter. The results speak and we must recognize and respect that against Chile they have been better than us. That is why we have to work with the humility to recognize that they have been better. You have to see the points, the qualities we have and how to improve.