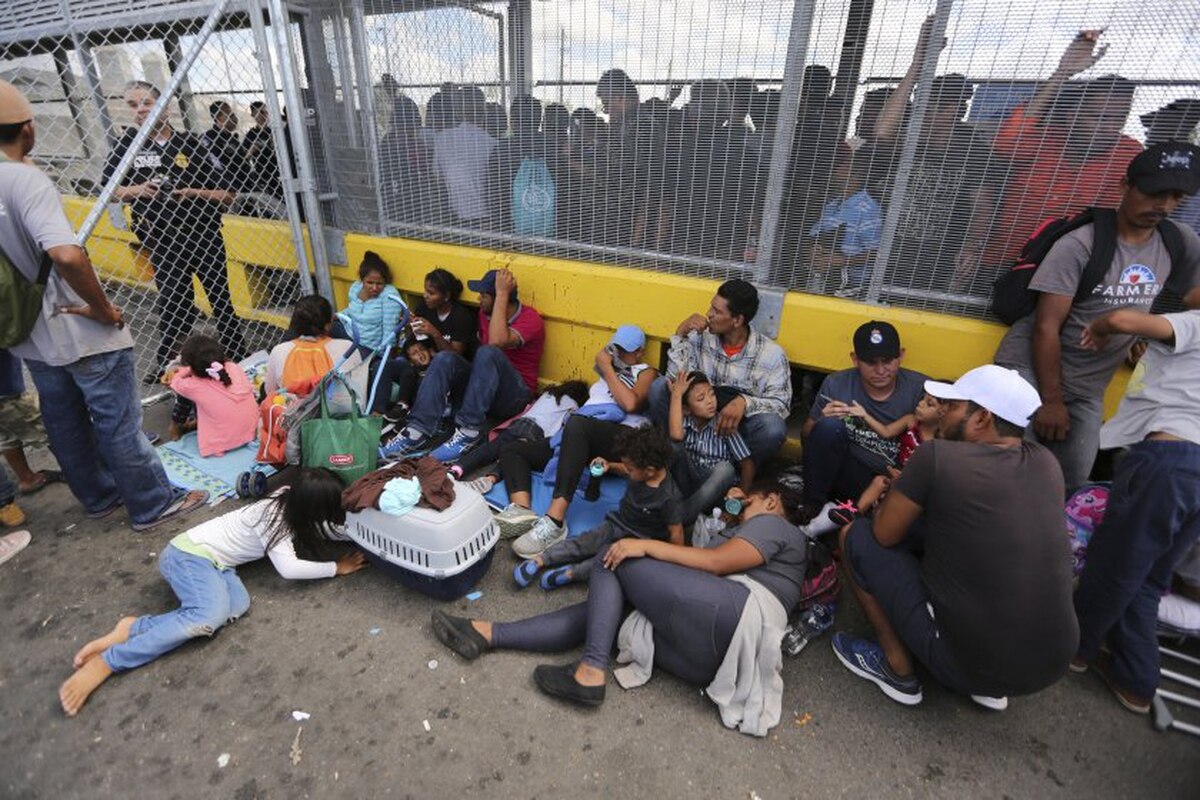 The border between Mexico and the United States is a pressure cooker. Hundreds of immigrants have blocked the border bridge Thursday separates Matamoros (Tamaulipas) Brownsville (Texas) to demand that the accelerate response to their asylum applications. Protesters wait for several months in Mexico as part of the Protocol Migrant Protection (MPP)A White House policy requiring applicants to wait south of the border while US courts resolve whether they can be protected on US soil. The makeshift camp has paralyzed truck traffic at that point of the border and prevented the transit of thousands of people crossing the checkpoint to work, study and perform other daily activities in both countries.

Immigrants have prevented access to the gatehouse, also known as Gateway, from early in the morning and the US Bureau of Customs and Border Protection (CBP) has deployed about 50 riot elements for closing traffic in both directions. Notimex, the state news agency of Mexico, estimates there are some 500 immigrants at the International Border Crossing while CBP protest figure between 250 and 300 protesters.

Motorists and pedestrians have had to opt for alternative crossing, Brownsville & Matamoros as the bridge, the gatehouse of tomatoes or the passage of the Indians. The border between the two countries is the busiest in the world, with bilateral trade exceeding 600,000 million dollars a year. The metropolitan area between Matamoros and Brownsville is the fourth most populous with about 1.3 million people living on both sides of the wall.

In the center of the protests are the consequences of MPP, a policy that was implemented earlier this year and is known informally as Stay in Mexico. In the days before the closing of the gatehouse, organizations and journalists accused that he was giving only process applications for asylum Mexicans. The University of Syracuse , which has statistical monitoring the legal process of MPP, says that more than 6,300 people waiting in Matamoros while receiving a hearing before US courts.

The bottleneck at the gates of the US causes long waiting times, ranging between four and six months. In the busiest points, dosing applications can be extended to eight months. One of the main criticisms is that asylum seekers waiting in Mexico are facing insecurity and violence contexts. Before the shift to the north of the migrant Caravan of October last year, estimated that the infrastructure Matamoros host city for barely a thousand migrants.

The city, which has just over half a million inhabitants, is located in Tamaulipas, one of the hot spots of violence and organized crime in Mexico. Last March, a dozen migrants who were traveling by bus from San Fernando, in the center of the state, Reynosa, on the border, was kidnapped. The government linked the disappearance to human trafficking. In September, the United Nations ordered the allegations be investigated eight extrajudicial executionsSupposedly covered by the state police. That same month the mayor of Matamoros was evacuated by a bomb threat. The scourge of violence in the state of northeastern Mexico has been so severe in the last decade that led to Morena, the ruling party, requested the disappearance of powers in Tamaulipas, but the request was rejected.

While Washington has launched in the last four months a series of unilateral and agreements with Mexico and the three countries of North Central to contain migration policies the focus of concern of civil and international organizations is that rights are guaranteed human of people in transit and in the country’s ability to manage immigration crisis. The exodus from the Central American isthmus figure this year more than 800,000 people, according to the Mexican government.
Several groups reported abuse in Mexico
African migrants face military police in Tapachula.
African migrants face military police in Tapachula. EFE

Blocking the frontier bridge in Matamoros is one of the last episodes of tension between immigrant groups and Mexican authorities. Summing Venezuela organization that assists immigrants from that country in the tourist state of Quintana Roo, he has reported this week that about 500 Venezuelans have been held for several hours, even days, at the Cancun airport. The organizations claim that has prevented them from entering Mexico without justification and without being allowed to contact their families, isolated in a room known as “the bubble”.

In Tapachula, near the border with Guatemala, several hundred immigrants from Congo, Angola and Cameroon who have been stranded in Mexico have met in recent days with agents of the National Guard. Immigrants have complained that the authorities have not resolved their applications to regularize their stay in Mexico and have amagado organize a caravan with no response.