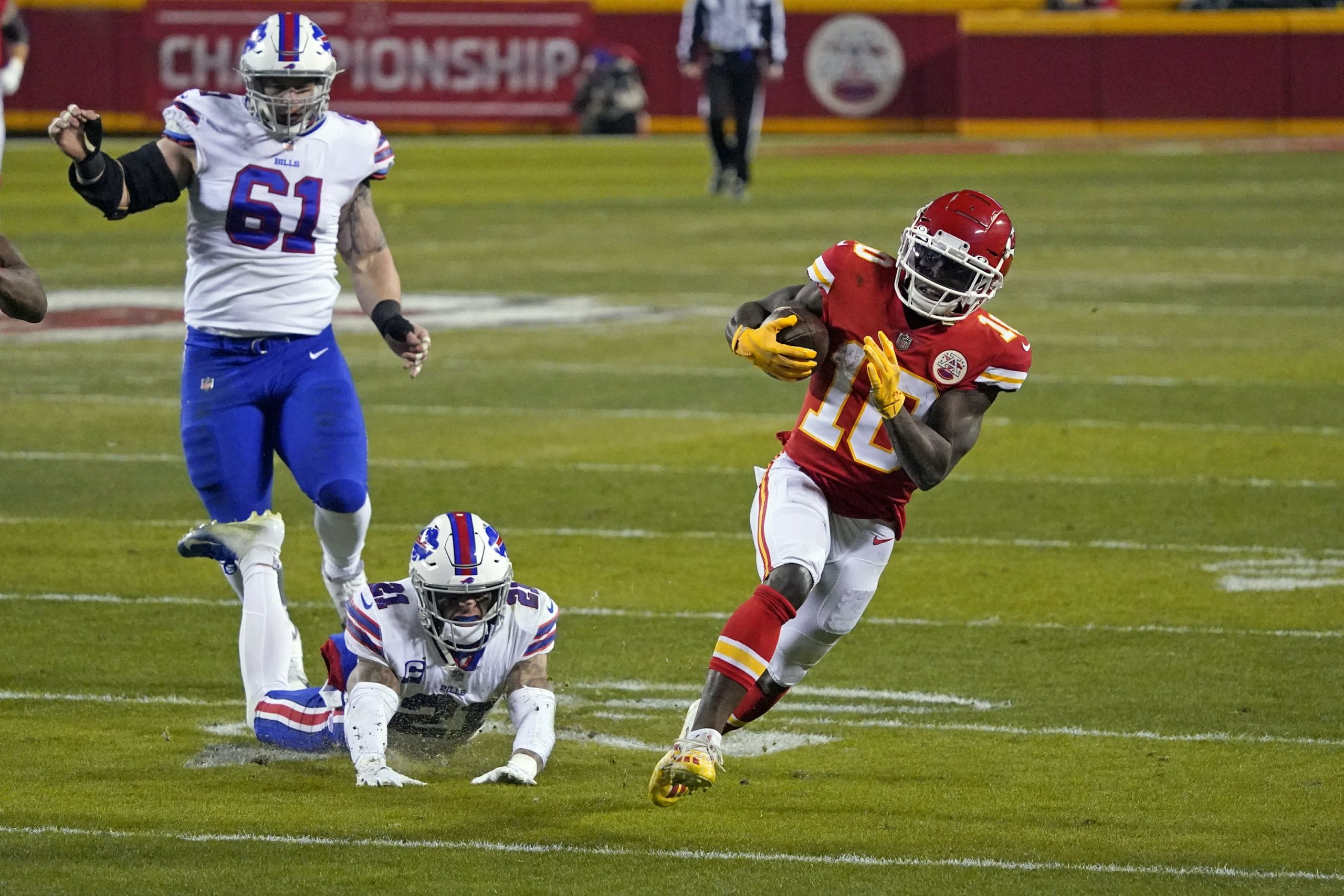 Now, the defending champions are heading into the championship match for the second year in a row.

No longer showing any effect of his concussion, Patrick Mahomes ripped through Buffalo’s secondary with relentless efficiency as the Chiefs beat Josh Allen and the Bills 38-24 Sunday in the AFC championship game.

Mahomes threw for 325 yards and three touchdowns, his favorites being Travis Kelce and Tyreek Hill.

The Chiefs will face in two weeks a familiar rival: Tom Brady and the champions of the American Conference, the Buccaneers, in Tampa, Florida.

“It was just trusting each other. The best thing about this team is that we believe in each other, ”said Mahomes, who was dealing with a toe injury. “But the work is not done yet. We’re going to Tampa, we’re going to try to do it again. ”

Kelce finished with 13 receptions for 118 yards and two touchdowns, and Hill added nine catches for 172 yards, becoming the first duo in NFL history to have consecutive games of at least 100 yards of balls received through the air in a postseason.

Clyde Edwards-Helaire and Darrel Williams added two short rushing touchdowns for the Chiefs, who will attempt to become the eighth franchise and the first team since the Brady Patriots in 2003 and 2004 to defend the Vince Lombardi trophy.

“I’m very happy to be able to do it again,” said Chiefs president Clark Hunt, whose father Lamar founded the franchise. “I have thought a lot about my father tonight, I have thought about my family and how excited my father would have been that we did it again at Arrowhead Stadium. That’s what he would have liked the most, ”he added.

Allen, who had his worst game of the season in week six’s loss to the Chiefs, struggled again against the swift Kansas City defense. He finished with 287 yards through the air, two touchdowns and an interception. But he achieved most of these numbers as the Bills were trying to overcome a 38-15 deficit in the final minutes.

His frustration was evident with 3:19 minutes to go, when Allen was being sacked by Tanoh Kpassagnon. Alex Okafor finished the takedown, and Allen threw the ball in his face in outrage. Offensive linemen Jon Feliciano and Dion Dawkins quickly intervened and dropped Okafor, which led to an avalanche of personal foul penalties.

“Obviously there were a lot of emotions,” Allen said. “Every time you don’t end the season with a win, that’s the kind of emotion you’re going to have. I don’t like the way it ended, with how uneven it was. I am disappointed in myself. I let my emotions get to me. This is not how you should play American football. ”

It all capped a bitter loss for the Bills, who reached their first AFC championship game since defeating Kansas City on January 1, 1994. They had won 11 of 12 meetings against the Chiefs before the loss this same. In fact, they hadn’t been down in the second half of a game since week eight and were confident this year could finally be the one to win the Super Bowl.

Instead, after finally outscoring the Patriots in the AFC Eastern Division, the Bills encountered a new obstacle on their way to the big game.

“It sucks after coming this far,” said Bills coach Sean McDermott, who once worked for his Chiefs counterpart Andy Reid in Philadelphia. “Sometimes the further you go, the harder it is to lose. It is a learning experience for us as an organization ”.

For his part, Reid said he was “proud of these guys.” The coach has 17 wins in the postseason and, along with Joe Gibbs, ranked fourth on the list of top winners.

“They did a phenomenal job and my hat is off to the Buffalo Bills and the great job they did all year, and most of all, listen, we have the Lamar Hunt trophy back in Kansas City,” Reid commented.