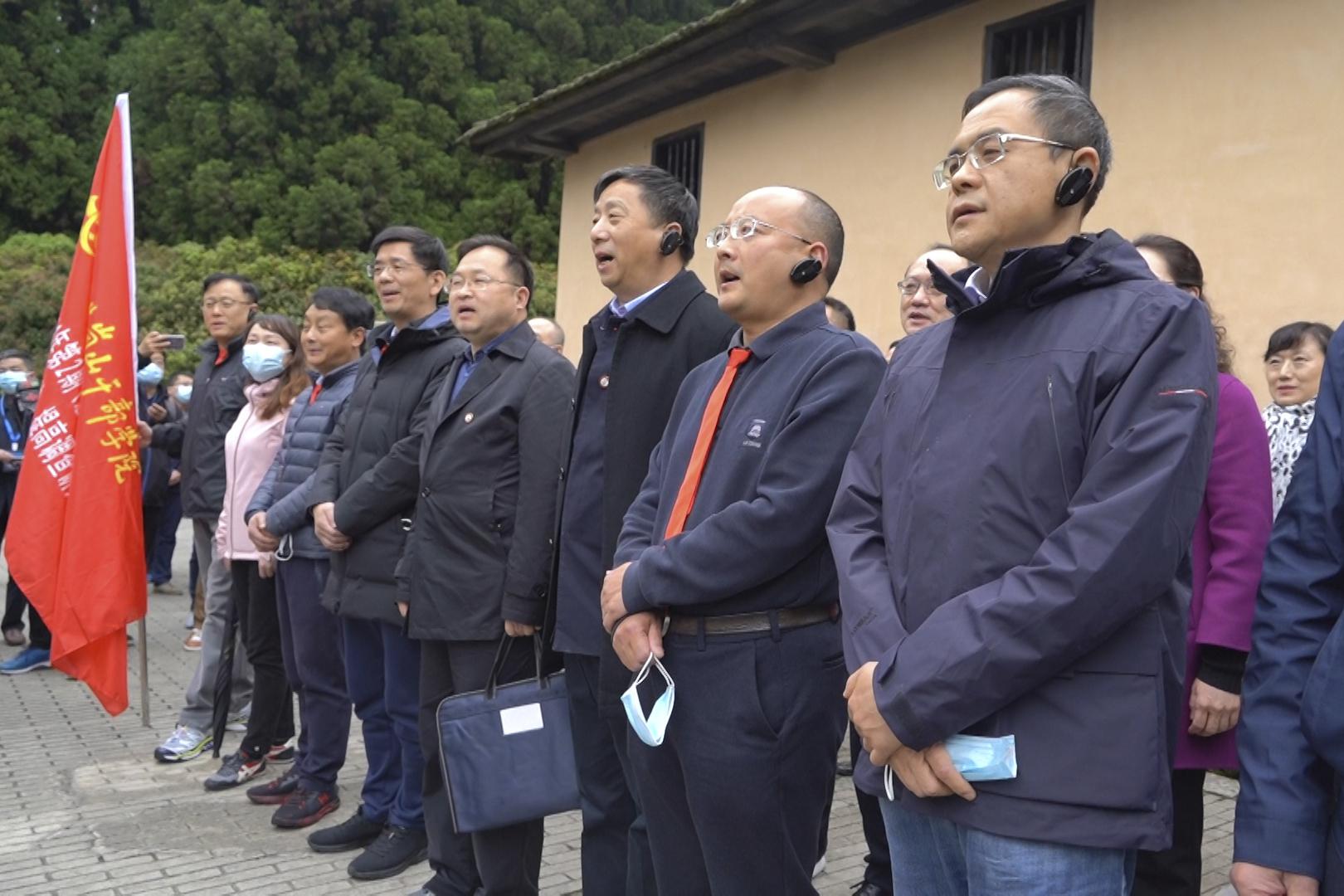 JINGGANGSHAN, China (AP) – With their backs straight and heads upright, three dozen Communist Party members in red ties, hoping to one day hold positions of leadership, recite a poem by Maro Zedong at a historic battle site. in central China.

“We held our heads high despite being surrounded by countless enemy forces!” Say these men and women during a two-week workshop at the China Executive Leadership Academy. “Together, we will defeat the enemy!”

One hundred years after the founding of the CP in 1921, schools like this one in Jinggangshan are part of the efforts of the government of President Xi Jinping to expand control of a society undergoing transformation.

Selected from 95 million affiliates, ambitious people from state-owned companies and government offices learn an idealized version of the early days of the revolution that led Mao’s army to power in 1949.

Zhou Xiaojing, who works at a political training center for the Chinese central bank in the central city of Zhengzhou, said the Jinggangshan workshop had represented “a spiritual shock and a kind of baptism.”

These future leaders say they want to serve the public, but those selected for top positions receive numerous benefits, including quick promotions to state-owned companies, universities, and ministries.

The party schools aim to “promote the faithful” and ensure “that they do not question the great leaders” or the party’s ideology, according to Willy Lam, a professor of politics at the Chinese University of Hong Kong.

Xi, who took over as the CP’s general secretary in 2012, launched a campaign in February designed to increase the teachings of the party’s history.

The official version of the story ignores the 1959-61 famine caused by Mao’s policies that resulted in the deaths of some 50 million people and the millions who perished in the violence associated with the 1966/76 Cultural Revolution launched by Mao. Nor does it speak of the repression of a democratic movement in Tiananmen Square ordered by the then supreme leader Deng Xiaoping.

And the infighting between party leaders and allegations of corruption and other abuses are not mentioned.

Xi hopes that “the party can keep alive the myth that it is always right and brilliantly promotes China’s interests in the world,” Lam said.

The Jinggangshan campus, the city where Mao’s army took shape, is one of three Leadership Academies in the country that attract professionals and senior party officials. The China Daily newspaper said in 2016 that the party had 2,900 training centers at all levels of government (national, state and municipal).

The 18-hectare campus in the mountains of Jiangxi province has dormitories, an auditorium, a library, and a cafeteria.

Participants in the two-week “Spirit of Jinggangshan” workshop take classes for six and a half hours, starting at eight thirty in the morning. From time to time there are events at night.

The students visited Huangyangjie, where Mao’s forces fought a battle on August 30, 1928. According to official history, the Communists were far fewer, but they fought off an attack.

Mao learned of the victory on the way to Jinggangshan and celebrated it by writing the poem that the students recite.

“The spirit of sacrifice and dedication to the party and the people is remarkable and profound,” said another student, Wei Yanju, vice president of the Eastern Shandong Province Women’s Federation.

“I hope everyone can come to understand China and see how great and great it is,” he said.

Party cadres have to participate in at least 32 sessions per year. Some charges require 56 sessions.

“Party leaders know that being sent to certain classes can open the doors to a bright future in the party,” said Charlotte Lee, author of the book “Training the Party: Party Adaptation and Elite Training in Reform-era China.” to the Party: Adapting to the Party and Training the Elite in China’s Reform Era).

“In return, they have to show loyalty and certain skills,” said Lee, who teaches at Berkeley City College.

Yao Yuzhen, an instructor at the school whose father was a member of the Red Army, said that while promotions are not guaranteed, students will make “better progress” after taking the course. “That is for sure,” he added with a smile.

Photos of Xi were displayed in a lecture hall as an instructor read the president’s speeches and highlighted the importance of party spirit and history.

“General Secretary Xi Jinping clearly highlighted in his speech that our party’s 100 years are 100 years in which we were committed to fulfilling the original mission,” said Professor Chenh Shenghua, director of the party’s history educational research center. from the academy.

Studying the history of the party “is the obligation of every member, cadre, of the masses and of the youth,” he said.

The “basic political objective” of every party member is “to study and implement Xi Jinping’s ideas on socialism with Chinese characteristics in the new era.”

Jinggangshan’s program focuses on the early days of the revolution, in the period 1927-35, and on Mao’s battles with the nationalist government.

Later periods and success in fighting poverty and coronavirus are also discussed.

“We mobilized the entire country and won the battle against the pandemic,” said instructor Liu Qiufu.