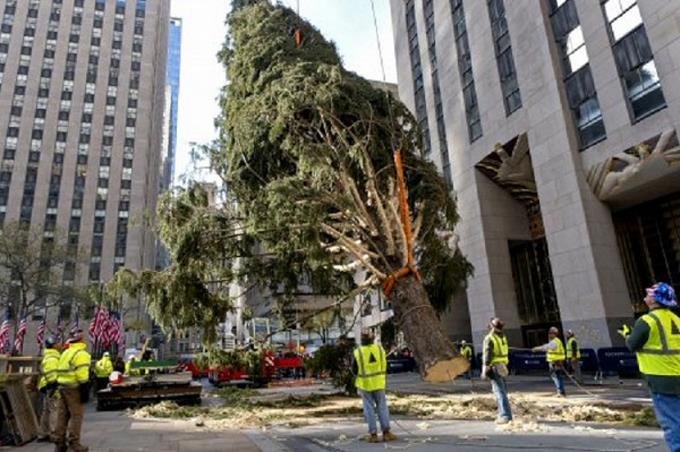 Hundreds of New Yorkers received on Saturday with enthusiasm and applause the Norwegian fir that arrived at the Rockefeller Center to be their Christmas tree this year, and that will be lit on December 4.

That long-awaited event traditionally marks the official start of Christmas in the big apple and thousands of people come here, both New Yorkers and tourists, who wait hours in the place to not miss that moment with what is perhaps the most famous tree in the world. world.

The tree, which was the center of attention this Saturday and the object of cheers and dozens of photos, arrived at the commercial center in Manhattan, in front of St. Patrick's Cathedral, after traveling 96.5 kilometers from the courtyard of the home of Carol Schultz, of 79 years, north of the state.

The fir, number 88 that is placed at the Rockefeller Center, was planted by the woman shortly after she moved to the town of Florida, in Orange County, from where she made the two-hour tour.

Schultz recalled that the tree was four feet (1.2 meters) when he arrived at his home in 1959. He initially placed it on a coffee table in his home and then planted it in front of his house that year, until it was cut last Thursday.

The small tree became a robust fir tree 77 feet high (23.4 meters) and 14 tons and has made its owner's dream come true that he was chosen to decorate the Rockefeller Center. Schultz had already postulated the tree in 2010.

"It turned out to be a magnificent tree. It is so beautiful, it has a perfect shape and I am happy to share it with everyone," Schultz told local press, after accompanying the fir on his trip to the city.

"He looks much taller here than at home, I can't believe he was in my yard. I'm glad everyone can see how beautiful he is," he said proudly.

The gigantic fir tree will be decorated with more than 50,000 colored lights and crowned with its Swarovski star for lighting and will be there until January 14 receiving its visitors.

The first Christmas tree that was installed at the site was placed in 1931 by construction workers at the site where the Rockefeller Center was being built.

The first formal ceremony of lighting the lights took place in 1933, and the tradition has been maintained since then with some variations.