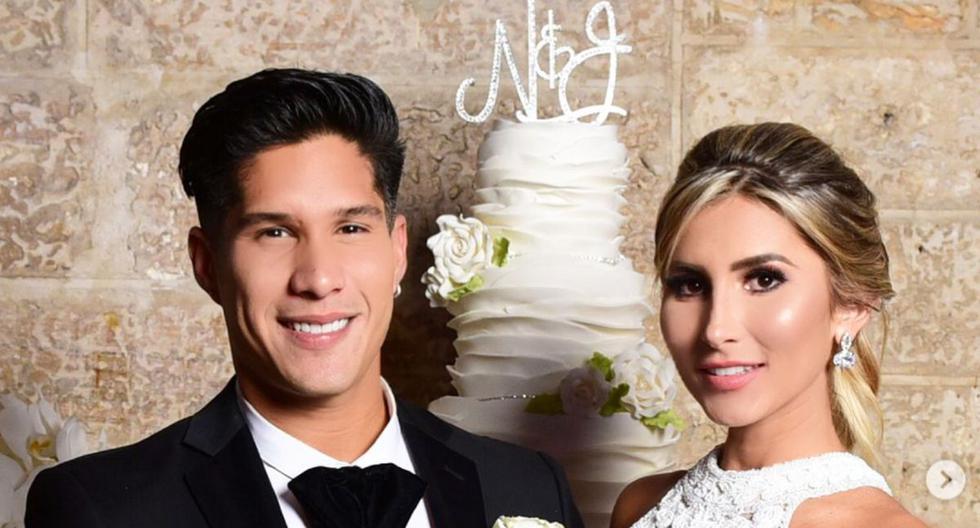 A story that was born and ended on social networks. Chyno Miranda and his still wife, Natasha Araos, announced to their followers, through a video they published on September 1, 2021 on Instagram, that they have not been a couple for more than a year. The love affair between the idol and the fan came to an end.

MORE INFORMATION: Who is Natasha Araos?

In the recording, the Venezuelan couple looks obviously hurt, even more so because of the comments that were made about their relationship. “We have not been together as a couple for more than a year,” revealed Chyno Miranda.

The singer, through tears, asked for consideration and respect. In addition, he said that during the period that he was ill as a result of COVID-19, he had the support of Natasha.

MORE INFORMATION: Why do Chyno Miranda and Natasha Araos continue to live in the same house if they are separated?

For her part, Natasha mentioned in the same clip that, although they will follow different paths, they will always be “the best team” to provide a happy, healthy and peaceful life for her son.

They also asked their followers for a lot of understanding and not keep falling into false rumors. Many fans were saddened by the news, as they have closely followed their love story. Do you know her? Here we tell you.

MORE INFORMATION: What is encephalitis and how did it consume Chyno Miranda’s body WHAT WAS THE LOVE STORY OF CHYNO MIRANDA AND NATASHA ARAOS?

The love story of Chyno Miranda, whose real name is Jesús Alberto Miranda Pérez, and Natasha Araos began and ended on social networks. The couple met in 2014, when they began to interact through Instagram.

She gave a ‘like’ to one of his publications and he decided to see her profile and it was dated: When I got on that girl’s profile I said: ‘Wow, what a show!’ “Chyno told the program Un Nuevo Día.

MORE INFORMATION: Nacho took a bike ride with Chyno Miranda and showed him his support after COVID-19 WHEN DID THEY BECOME SHARED?

The singer proposed to Natasha on April 9, 2017, after two years of dating. The famous singer made her think that it was all about a music video, as he took her by helicopter to Canaima, Venezuela. When she arrived, she saw him from the heights, kneeling with a huge sign that said “Will you marry me?”, Univision says. The announcement of the engagement was announced on August 22 of the same year.

MORE INFORMATION: Chyno Miranda and peripheral neuropathy, the aftermath of COVID-19 that left him in bed unable to walk. WHEN WERE THEY MARRIED?

The wedding Chyno Miranda and Natasha Araos was a surprise for their followers, as they got married on August 26, four days after announcing their engagement. They served Venezuelan food and their cake was five tiers.

The civil wedding took place in Miami, Florida, in an intimate ceremony attended by only family members and closest friends.

“And we got married in civilian law, too happy! I love you! ”Natasha commented in one of the photos she shared on her Instagram account.

MORE INFORMATION: Chyno Miranda appreciates support after announcing the end of his relationship with Natasha Araos

In October 2018 Chuyno and Natasha announced that the family would grow. With a video on Instagram, he shared the emotional moment of how he found out when he opened a gift with a t-shirt that said “Dad to be loading …” (“Dad is loading”). “The most important news I have ever received in my entire life,” he said.

On April 7, 2019 at 2:28 pm, Lucca was born in Miami: “He came to my chest to give me the greatest love that human beings can feel,” Chyno showed, visibly moved, on Instagram. “I feel complete and fulfilled. My dream is fulfilled and now I will dedicate all that I am to keeping him healthy and loved together with the best and most admirable mother my prince could have had,” he wrote.

MORE INFORMATION: Chyno Miranda and Natasha Araos have not been together for “more than a year” COVID-19 AFFECTS CHYNO’S HEALTH

At the end of 2020, the singer shared with his followers that he was hospitalized for a month for a “peripheral neuropathy” as a result of COVID-19, a virus that caused him paralysis and severe pain. After several months of therapy and with the support of Natasha, as well as his family and friends, the Venezuelan managed to recover, although he is still undergoing rehabilitation therapies.

MORE INFORMATION: Luis Miguel and Mariana Seoane, how did they meet and why did they break up? WHY DID THE LOVE BETWEEN CHYNO MIRANDA AND NATASHA ARAOS END?

In July 2021 speculation began that the couple was separated. It was even said that Araos had driven the singer and his mother-in-law from the house, but the information was denied by the Venezuelans. Finally, the couple announced the end of the relationship on Instagram, but said they will remain together as a family. But why did this beautiful love story that began and ended on social networks end?

“I have to confess it to them and be honest with everyone. I disrespected her as a wife, I disrespected my home as well and, well, we have not been together as a couple for more than a year, ”said the singer with a broken voice. They detailed that the marriage had ended a year ago.

And why did they decide to tell it after a year? Some say that they should have defined the ‘decision and others that it is because the program’ Gossip No Like ‘shared photos that the singer had uploaded to his Instagram account, and that they were immediately deleted, where he was seen in bed with another woman and in a very romantic way.

The couple in a video announced that they continue to live together for the well-being of their son, which is their priority. “We are still together, still, everything will have its time, its step,” Natasha explained. Finally, Chyno Miranda said goodbye to his fans saying: “Thank you from the bottom, a kiss.”