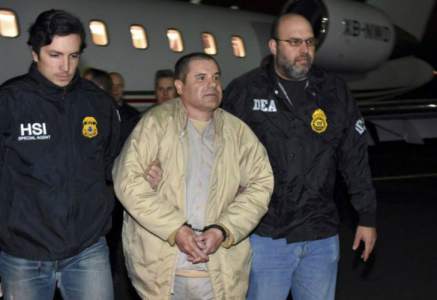 The Mexican authorities accumulate a history of mistakes and ridicule with the clan of Joaquín "el Chapo" Guzmán for the chaos generated last Thursday with the arrest and subsequent release of one of the children of the drug trafficker.

The response with high-caliber weapons from the henchmen of the son of Chapo forced the security forces to release him to avoid a bloodbath in the city of Culiacán, in the northwestern state of Sinaloa, which was taken for hours by drug traffickers.

"More than in ridiculous, (the Government) is in a clear situation of weakness due to its remarkable improvisation," said security specialist at the National Autonomous University of Mexico (UNAM) Javier Oliva.

The relationship between what happened on Thursday and the two leaks of high-security Mexican prisons in Chapo reflect the continuity of failures and corruption for decades in the security forces, regardless of the ruler.

Errors that now continue under the mandate of President Andrés Manuel López Obrador, despite his promise to transform the nation.

"There is no lack of state or absence of the federal government," said, however, Friday the head of the Ministry of Security and Citizen Protection (SSPC), Alfonso Durazo, in an uncomfortable press conference of the Security Cabinet after the " failed "operational.

The Mexican Government was marked somewhat with the arrest and subsequent extradition to the United States of Joaquín Guzmán, who is serving a life sentence in a maximum security prison in that country.

However, during five years it was proof of the country's security failures. And above all the relationship between drug trafficking and easily bribable authorities.

El Chapo founded the Sinaloa Cartel and in 1991 was arrested, but bribed the Chief of Police of Mexico City with $ 100,000 to escape.

Arrested in 1993 in Guatemala and extradited to Mexico, he was prosecuted for drug trafficking and imprisoned.

But in the maximum security prison of Puente Grande, in the western state of Jalisco, he starred in his first great escape in 2001.

As film as comic, he escaped hidden in a laundry cart with the help of a dozen corrupt officials, according to the most widespread version.

Since then he became one of the main fugitives of the Justice of Mexico and the United States, until in 2014 he was captured in the city of Mazatlan, in his native Sinaloa.

Just a year and a half later, he achieved his second and most spectacular escape. Thanks to several henchmen and with the supposed help of prison officers, he fled through a 1,500 meter tunnel from a nearby house to his cell shower.

He was arrested six months later, although the confidence of the citizenry towards the Mexican Government, then headed by Enrique Peña Nieto (2012-2018), was severely damaged.

AND HISTORY REPEATS WITH ITS PEOPLE

Although without so much power or projection, some of the sons of El Chapo have also managed to evade Justice on several occasions.

Ovid was one of the brothers with the lowest profile but he still managed to get his minions to lead a force pulse on Thursday against some thirty security agents who ended up winning.

Ovid Guzmán was released by order of the Mexican authorities after registering a pitched battle in Culiacán.

Despite being surrounded by an operation of 30 agents, such chaos broke out in Culiacán that to preserve "lives" – in the words of the president himself – it was decided to release him.

The error of calculation of the security forces, branded as "precipitated" by the head of the Army, Luis Cresencio Sandoval, exposed an apparent lack of professionalism or discipline.

Another son of El Chapo, Jesús Alfredo Guzmán Salazar, is considered by the FBI as one of the most wanted criminals. In 2012, the authorities announced his arrest and that he had found weapons, money and false IDs.

It was soon discovered, in the face of general derision, that there was confusion and the prisoner was not the son of the leader of the Sinaloa Cartel.

Iván Archivaldo Guzmán, one of the leaders of the cartel, was arrested in 2005 for the crime of money laundering and three years later he was released when a judge dismissed the accusations.

The event in Culiacán also questions the communication strategy of the Government of Mexico.

See: Los Chapitos: They are the 9 heirs of Joaquín 'El Chapo' Guzmán

It was not until about five hours after a short video message of Durazo was released along with senior commanders from the Army, the Navy and the National Guard.

Instead of calming the waters, he did nothing but sow doubts.

Although he said that Ovidio Guzmán had been located – implying that he was captured – later spoke of a "suspension of shares".

This ambiguity had a negative effect. And anger and misunderstanding was felt in networks and in the media.

A day later, what happened was clarified with an official version that acknowledged that there were 8 dead, 16 wounded and 49 inmates escaped from a local prison that took advantage of the city's chaos to provoke a riot and flee. EFE