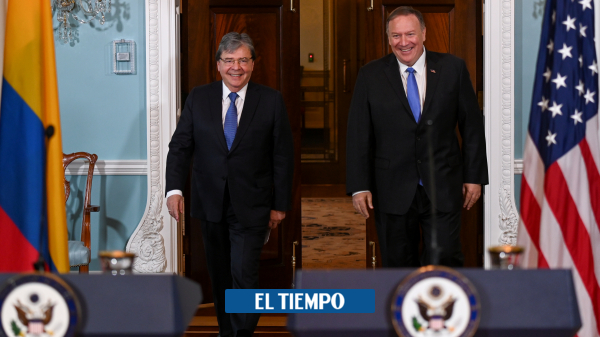 Colombia and the United States agreed on Wednesday in Washington a new anti-narcotics initiative with which they intend to strengthen the police presence of the state in four of the areas most affected by illicit crops and the presence of criminal groups such as the Eln.

Authorized sources confirmed to this newspaper that the initiative will be financed with US $ 124 million in resources that the US will contribute. and that they will begin to disburse immediately.

Those US $ 124 million dollars are additional to the nearly US $ 420 million that Washington approved to spend in the country throughout this 2019.

The new agreement was reached during the High Level Dialogues held by both countries in the US capital and were headed by Secretary of State Mike Pompeo and Foreign Minister Carlos Holmes Trujillo.

The initiative aims to increase the police presence in the so-called "future zones", located in Nariño, Catatumbo, Arauca, and another area that includes the Lower Cauca of Antioquia and the south of Córdoba.

Likewise, provide mobility for the groups of eradicators that will be displaced to these areas. Under the agreement both countries also pledged to promote economic development programs for this areas of the country.

During the dialogues, it was also agreed to create an Anti-Narcotics Working Group composed of the two countries that will monitor the fight against narcotic drugs.

In the High Level Dialogue between the two nations, the Peace Commissioner, Miguel Ceballos, the High Stabilization Counselor, José Archila, the Rafael Guarín National Security Advisor, and the Vice Minister of Defense Diana Abaunza, among others, also participated.

The group held meetings throughout the day with their US counterparts to discuss multiple issues on the bilateral agenda ranging from energy and education to the fight against drugs and the crisis in Venezuela.

(We suggest you read: 'I am not using appointments to be a candidate': Chancellor)

¨ These meetings demonstrate how much we value our friendship with Colombia and the values ​​we share. And in that we must give enough credit to the government of President (Iván) Duque¨ at the opening ceremony of the dialogues in the State Department.

Pompeo defined three major issues that are a priority on the US agenda. with Colombia and that will be the subject of discussion.

First he put drug trafficking. Although he acknowledged the important advances that have been made since Duque became president, he said there was still a long way to go and recalled Colombi a's commitment to reduce 50 percent of the crops by 2023.

He then emphasized Venezuela, where he highlighted the courageous efforts of the government to deal with the migrant crisis and promised to continue providing resources for the same purpose.

Finally, Pompeo spoke of the important commercial relationship that exists between both nations and their interest in continuing to grow

"Colombia is proof that you can dream of a better country if you work hard," said the secretary, indicating that in just a decade the income per capita has doubled and dramatically reduced poverty rates.

Trujillo, on the other hand, highlighted the great advances that have been achieved as a result of the High Level Dialogues with the US. which began in 2010 when the presidency of both countries were Barack Obama and Juan Manuel Santos.

According to Trujillo, thanks to them, support was obtained to enter the OECD, cooperation for demining, access to the Global Entry program (which grants accelerated processing for entry into the US) and educational exchange programs.

According to the Chancellor, thanks to this initiative, the bilateral relationship between the two nations has not only been strengthened but also diversified.

Trujillo also agreed with Pompeo that the three most important issues on the agenda from the Colombian perspective are the fight against drugs, Venezuela and the expansion of trade.

In a subsequent press conference the chancellor thanked the help that the US He has been giving Colombia to face the crisis generated by the mass exodus of Venezuelans but indicated that more resources were needed given the size of the problem.

He also briefly referred to the situation in Ecuador, adding that the country was ready to contribute to the maintenance of democracy in that nation.

The photos were part of the context of the presentation, but never the substance of the complaint

In the press conference Trujillo answered questions about the 128-page dossier that the government presented to the UN and the OAS and that sparked controversy over the inclusion of some photographs that did not correspond to the presence of Colombian narcoterrorist groups in Venezuelan territory.

"The evidence that exists against the Maduro government is overwhelming and has been presented for years. The issue of photos is somewhat accessory. And we will continue to bring the complaint in various scenarios. We will also go to NATO and the European Union" said the Chancellor.

The Colombian ambassador to the OAS, Alejando Ordóñez, also gave public explanations at the end of last week before the Permanent Council of this organization.

According to Ordonez, the photos "were part of the context of the presentation, but never the substance of the complaint, because the dossier contains 128 pages that prove and show technical evidence of the protection that the dictator Maduro provides to terrorist organizations."

For the Ambassador "if photographs taken on one or two pages of the 128 appear
by journalistic means and they presented some imprecision of form and not of substance that could be committed in the compilation of the document, that cannot be the distracting factor. The important thing is the background of the content of the dossier, of which no one has any doubt, not even the Maduro regime. No one has questioned the substance of the content and the evidence revealed there. "