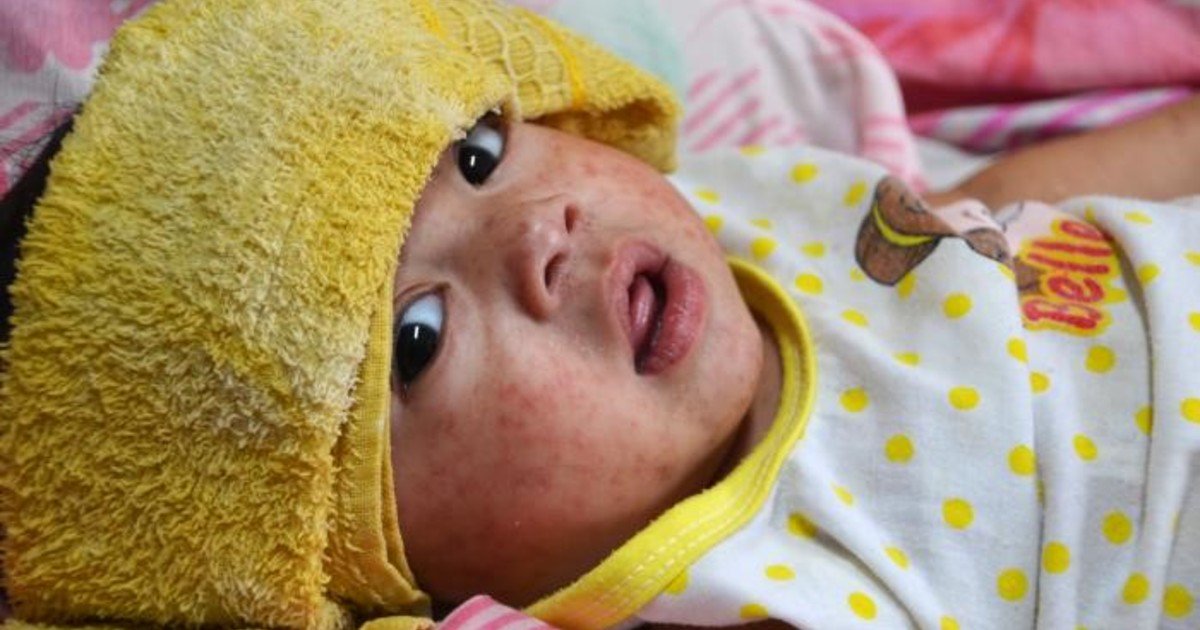 With 26 cases so far this year, Argentina is experiencing the worst measles outbreak since in 2000 it eliminated the endemic circulation of the disease. In the last week eight were confirmed: five are boys from 5 to 19 years old, children of an anti-vaccine woman who contracted the virus and whose case had been notified last week.

"She and the husband were convinced not to vaccinate," said Clarín Cristián Biscayart, head of the Directorate for the Control of Immunoprevenible Diseases of the Ministry of Health. “When the mother's thing was confirmed,” he continued, “the boys stopped going to school, so the school was not exposed. That was a positive thing. Between the municipality and the school authorities they decided to continue the activities at home. ”

What happened today | We tell you the most important news of the day, and what will happen tomorrow when you wake up

The boys are 5, 9, 13, 16 and 19 years old. Although everyone had to have at least two doses of the triple viral vaccine – which protects against measles, rubella and mumps and is applied free of charge and mandatory – none had that history. It is also mandatory to present the certificate at school entrance.

“Here it is very important what reinforces the new law 27,941, that people understand that there is an obligation to vaccinate, that it is not something optional, nor that it has to do with conscientious or religious objections. With this type of attitude is being exposed to third parties. If everyone does what they want, the community bond is lost. Each one has a responsibility, because their right ends where that of others begins, which is the right to be protected, ”said Biscayart. And he recalled that "the greatest risk occurs in children under 6 months who cannot be vaccinated under any aspect and are those who are getting sick, and in immunocompromised persons who cannot be vaccinated."

As for the children of the 44-year-old woman, resident in Ituzaingó, who contracted the virus in a health center in the City of Buenos Aires, she informed that “they were vaccinated a little late because her case was notified in the limit to be able to make blocking actions that were effective, ”said the infectologist. Children and adolescents manifested fever and rash (rash), the main manifestations of the disease that can cause serious cases. The whole family evolves well.

The worst outbreak in almost 20 years

During September five epidemiological alerts were issued in which half of the 26 cases registered so far this year in the country were notified. The last 8 were announced this morning by Secretary of Health Adolfo Rubinstein in an interview with Radio Con Vos with Ernesto Tenembaum and Reynaldo Sietecase. It is expected that a new alert will be issued today with the official communication. “We have had an entire family belonging to the anti-vaccine movement for the first time. With that we also have to be very careful, ”he said.

The World Health Organization (WHO) this year included doubts about vaccines (reluctance or rejection) among the 10 main threats to global health, as it threatens to reverse the progress made in the fight against preventable diseases by vaccination. Vaccination is one of the most cost-effective strategies to prevent the disease: it currently prevents 2 to 3 million deaths per year and another 1.5 million could be avoided if global coverage is improved.

The other three new cases reported in the last week are that of a 19-year-old boy, a 10-year-old boy and a five-month-old baby. "All the last reported cases have an epidemiological link with previous cases, with a site of contagion in the City of Buenos Aires," said the head of the DiCEI. “Of course we are very worried as long as cases continue to appear. It is a very dynamic situation, but in the last 10 days it has a certain profile, clearly the outbreak must be cut, but it is not a situation that is out of control, ”he added.

“The situation is serious and we are very concerned, we have been alerting since the first cases of this outbreak were confirmed in September. In the context of elimination, a case is considered an outbreak and because measles virus is very transmissible, it is essential to implement immediate and sustained control actions. This means an immense effort by health teams to investigate case contacts, block vaccination, complete vaccination schedules, take samples for study, monitor if any contact with symptoms appears, and start over with each new suspect case. , among many other actions. The control of an outbreak implies, not only this effort, but also an important cost for the country, so it is always better to prevent and in this case act quickly for its early control. Measles is not a banal disease, it has no specific treatment, it can be complicated and even cause death in 1 to 3 per 1,000 cases. As always, the risk is higher in the most vulnerable, children under 5, immunocompromised or malnourished people, ”said Caroline Vizzotti, president of the Argentine Society of Vaccineology and Epidemiology, Clarín.

Before the detection of new cases of measles, the Ministry of Health intensified in the last weeks the prevention and control actions. The main measure is to lower the age of vaccination with a “zero dose” (which does not count as the first calendar given to the year of life), to all babies aged 6 to 11 months living in the City of Buenos Aires, and the sanitary regions V, VI, VII and XII of the Province of Buenos Aires, which include Campana, Escobar, Exaltation of the Cross, General San Martín, José C. Paz, Malvinas Argentinas, Pilar, San Fernando, San Isidro, San Miguel, Tigre, Vicente López, Zárate, Avellaneda, Lanús, Lomas de Zamora, Almirante Brown, Berazategui, Esteban Echeverría, Ezeiza, Florencio Varela, Quilmes, Gral. La Heras, Gral. Rodríguez, Luján, Marcos Paz, Merlo, Hurlingham, Ituzaingó, Morón, Tres de Febrero and La Matanza. In addition, all children between 13 months to 4 years inclusive must at least certify at least 2 doses of triple viral vaccine in the aforementioned jurisdictions. In turn, the current recommendation was reinforced for all health personnel who must prove at least 2 doses of vaccine or have a positive IgG certification for measles.

Meanwhile, people across the country from 12 months to 4 years old must prove at least one dose of triple viral vaccine. Those older than 5 years and adults born after 1965, two doses of double or triple viral given after the first year of life. “The adult who does not know if he is vaccinated, to be vaccinated. There are doses to deal with this situation and we are trying to acquire more to guarantee the regular scheme and intensified actions, ”said Biscayart.

“This is stopped vaccinating house by house. We must not stay in the post. You have to be drastic with the allocation of resources. There are vaccines, but you have to give money to the municipalities for fuel and to go house by house and for the payment of overtime to vaccinators. If not, cases will increase. Capital and Province are on fire and the provinces will be moved by the movement of people, ”said pediatric infectious disease journalist Silvia González Ayala, secretary of the Commission for the Certification of the elimination of endemic circulation of Measles and Rubella .

"At this time, in which we have an ongoing outbreak that is not controlled, if we do not work together health authorities, health teams, scientific societies, civil society and the media, we run the risk of the situation getting worse," he said. Vizzotti “In Brazil, in three months there were more than 6,000 cases and 6 deaths. Here and now public health should be prioritized as a state policy, all actors must act in a responsible, transparent, timely and coordinated manner so that Argentina remains a measles-free country, under the guiding role of the State. Our main concern is that the risk that the situation implies is not dimensioned and that this information reaches the population and local health teams so that they have an active role, disseminate recommendations, control their vaccines, consult with symptoms and be notified in timely way. It is the only way to interrupt the circulation of the virus. ”

For Ángela Gentile, president of the Commission for the Certification of the elimination of endemic circulation of Measles and Rubella, the maximum effort must be put into vaccinating and complying with the intensified schemes and measures. “That the population really understand the importance of vaccination. It is not accidental the appearance of this family with strong anti-vaccine beliefs. They exist in the City, in the country, perhaps not with the scale with which they occur in the United States and Europe, but they exist. And for everything that is reluctant to vaccination, media action, dialogue, creating spaces for the community to understand the importance of vaccination is essential. It is an issue that we will have to work a lot in the future, not only for triple viral vaccine, but for all of the calendar ”, he concluded.