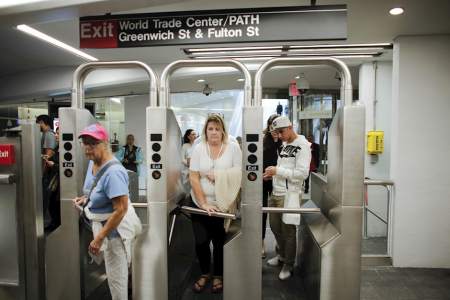 Political leaders, activists and street vendors denounced on Wednesday what they consider excessive police surveillance in the New York subway stations, where these days they have arrested immigrants selling churros.

"New Yorkers love churros," said Councilman Antonio Reynoso of Brooklyn, where in less than a week the police have arrested two vendors of that product at a subway station.

Reynoso was accompanied by Senators Jessica Ramos and Julia Salazar, as well as activists, who outraged demanded that the city grant permits for these workers not to face problems with the authorities while listening to immigrant vendors shout "here we are and we are not leaving "and" without justice there is no peace. "

Read more: US judge dictates that migrants with fear of returning to Mexico have lawyers

They also accused the state governor, Andrew Cuomo, a democrat like them, of having increased the number of police officers in the subway stations by 500.

"We do not want the 500 policemen to enter the subway system and continue the threats (to the vendors). We already have many police officers (in the subway) and they have nothing to do," he told Efe Reynoso, 36 and Dominican origin

Reynoso believes that there is a need for a debate in the city on this issue: "they are meant to protect people, not harass them."

Cuomo was also accused of having created the fiscal crisis that the Metropolitan Bus Authority (MTA) is going through and that it seeks to generate funds by imposing fines on poor people who earn a living by offering their products.

"What is happening is that we have a governor and a mayor who have not given money to take care of the subway, which is dirty, operates late and awaits repairs for decades," Reynoso said.

Last Friday several police officers arrested an Ecuadorian, identified as Elsa, who sold churros at a subway station in Brooklyn, where they handcuffed and confiscated her merchandise. A subway user recorded the incident and uploaded it to social networks, becoming viral.

Read more: Honduran in Yale seeks to prevent deportation of his mother with cancer

Elsa, whose arrest has caused outrage, has said that three years ago she sold churros to support her seven children in Ecuador.

Several city politicians, including the president of the City Council, Corey Jonhson, criticized the action of the Police, which has said that it is forbidden to sell at subway stations and that the Ecuadorian had several infractions. Mayor Bill de Blasio supported the action of the agents.

Three days later another churros seller, María Corillo, was also arrested and handcuffed at a subway station in Brooklyn.

To sell on the streets you need a license that can be obtained without problems but you also need a permit granted by the Department of Consumer Affairs, of which 5,000 have been issued throughout the city.

Read more: "Dreamers" will ask in Washington to restore the "Advance Parole"

The problem is that this permit has not been issued for 35 years while the population has been increasing and many immigrants make a living that way. The waiting list for the permit exceeds 2,000 people.

That is why this Wednesday sellers, politicians and activists also joined their voice to ask the president of the Council to give way to a proposed law so that those permits are granted again.

"Women who sell churros are not a threat. I want to make sure that as a government we are giving priority to resources and not criminalizing the way we earn a living honestly," said Senator Ramos.

Mexico's Maria Marín has been selling tamales and other food on the street 18 years ago to support her four children, two of them in her country, and told Efe that last year her products were thrown away by the Police and the Department of Health and a fine of $ 2,000 was imposed.