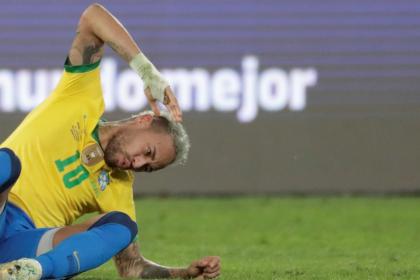 Neymar was the protagonist of Brazil’s qualification for the Copa América grand final, assisting Lucas Paquetá for the solitary goal with which Verdeamarela defeated Peru at the Nilton Santos Olympic Stadium.

The Brazilian, displeased with the act of the judge of the contest, attended the press after winning the victory and described the Chilean referee Roberto Tobar as ‘arrogant’, and said he preferred the Argentine team, instead of Colombia, in the final of the Cup, which will be held on July 10 at the Maracanã stadium.

“I want Argentina because I have many friends there and I want to face them and for Brazil to win,” said Canarinha’s ’10’.

Neymar shared a dressing room with Lionel Messi at Barcelona and now he does it with Ángel Di María and Leandro Paredes at Paris Saint Germain. The other finalist of the 47th edition of the tournament will be known this Tuesday morning after the match in Brasilia between Albiceleste and the Colombian team.

Likewise, the Brazilian star referred to the goal that allowed Brazil to get a ticket to the final, which was the result of a good combination between him and Lucas Paquetá.

“Paquetá is a great player and has grown with each game. He had a great season with his club (Lyon) and is a very important player for the Brazilian team,” he said.

Finally, the forward criticized the referee of the match, whom the Peruvian team complained about for not awarding him a penalty. The move was also not subject to VAR review and increased discontent in the Andean country.

“He is a very arrogant referee. The way he looks. It is disrespectful. He can make mistakes or get it right, that is part of the game, but he cannot be a Copa América semifinal referee,” concluded Neymar.