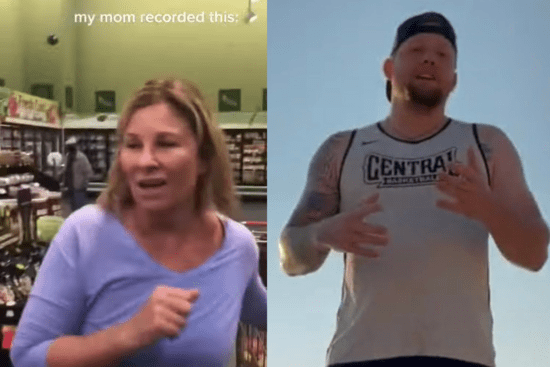 LINCOLN, Nebraska – A woman who was caught on camera appearing to deliberately cough inside a supermarket without wearing a mask in a Nebraska city where there is an indoor mask mandate is now out of work.

It was originally posted on Reddit earlier this week by user Jessabird, who said he was with his son at a supermarket in Lincoln when the woman allegedly approached them and asked why they were wearing masks.

“She asked me if I had been vaccinated and said that my son and I don’t need to wear masks because we look young and healthy. There were several people around with masks, but for some reason she chose to mess with me and my son, “writes Jessabird.

In the video, the woman is seen walking towards the video recorder and coughing several times in its direction.

KMTV reported Thursday that Lincoln police had not received a complaint from a victim, something that would have been necessary to press charges against the woman. Two online activists known for tracking people in similar videos identified the woman as a resident of Arizona and a former employee of the German company SAP.

The company issued a statement on Twitter late Wednesday saying: “We have reviewed the incident and can confirm that the person in question no longer works for SAP.”

The health and safety of our employees and the communities in which we live and work are of utmost concern to us. We are taking the matter of an SAP employee incident very seriously and investigating the situation.
– SAP (@SAP) September 8, 2021

The health and safety of our employees and the communities in which we live and work are of utmost concern to us. We are taking the matter of an SAP employee incident very seriously and investigating the situation.

You can see the interaction in the tweet below, posted by @RoBeastRo, who told KMTV that the video was taken by his daughter’s mother.

A second tweeted video shows the moments before the woman started coughing. In it, he is heard saying, “I don’t need to wear[a mask] I’m not sick and neither are you ”.

She then starts coughing openly at the grocery store and says it’s his allergies, according to the video.

Jessabird said an employee tried to intervene and the woman walked away, but Jessabird alleges the woman followed her through the store afterward.

“She laughed and kept saying ‘Look at you, it’s so cute how scared you are!’ At that moment I was absolutely livid, trying my best to hold myself together in front of my son. I didn’t finish my shopping, instead I went to the self checkout to pay for my things, ”Jessabird said.

The poster said that she informed another employee in the boxes about the woman who had coughed her earlier, but left before receiving a response from the employee. Check out the full Reddit post here.

According to the city of Lincoln, Nebraska, where the grocery store is located, everyone must wear masks indoors, regardless of vaccination status.

At this time, Lancaster County is considered to be “at high risk for the spread and impact of COVID-19 in the community,” according to a Sept. 3 update.