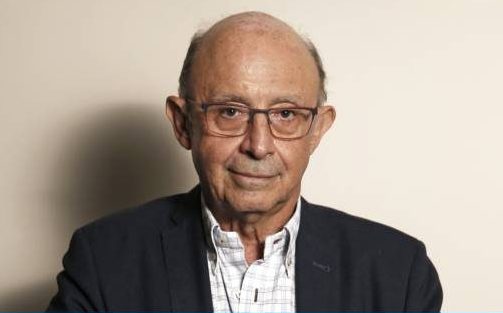 Cristóbal Montoro (Jaén, 69 years old) says that one day he applauded Pedro Sánchez. “The then candidate of the motion of censure explained that he was going to rely on the PP Budgets. I applauded him and I didn't stand up because it seemed excessive. ” The former Minister of Finance has avenged the eviction of Rajoy de La Moncloa with a long extension of his Accounts, approved in mid-2018. Pablo Casado dispensed with him on the electoral lists in April. Part of their approaches differ from those of the new PP. And not only in economics.

Question. Sanchez said he would not sleep if the finance minister, for example, were from Podemos. Would you have nightmares?

Reply. Treasury is the state machine room. I understand these precautions perfectly. It was very interesting to see how in the first negotiations certain parties asked for some ministries, and then, when they learned, others. If you have a coalition in the Treasury, the coalition will tell you what you have to do.

Q. Who in the PP would like to see as Minister of Finance?

Q. Many former ministers of the Rajoy stage have left …

R. I brought Jaime Caruana, Luis de Guindos, who no one knew him to politics … That is what I mean by the benches, people who tokens, with whom you have an ideological sympathy. The advantage of the big games is that experience. In fact, the new fish in the fishing grounds of others, people who bounce and change parties. But politics is management.

Q. Many of these managers are gone. Has the PP been decapitalized with the departure of Sáenz de Santamaría, Báñez, the Nadal brothers or yourself?

A. I do not celebrate their absence. Things change within the parties, people are more comfortable, less comfortable … But the capital, the credibility and trust of the PP is the economy, having managed the country, and that must be preserved.

R. Have they left or let them go?

Q. I have been in politics for 26 years. It is normal to be left, even if only because of fatigue. There is a new address in the PP and you have every right to choose those who must attend or not. Now, it is true that in the relationship of current deputies there is a very notable absence of the economy. A little more training would not hurt. You can't devalue that way.

Q. Do you see too many signings on the lists?

A. Yes, of the celebrities. Politicians have entered that game in which the important thing is that they know you and not why. There is more and more frustration in people and it is normal, because there is a lack of content. The important thing is to do well on TV, but they do not distinguish you from the other who is about your age and speaks like you and only makes tweets. We are emptying politics. It seems that there are only communicators. And it does not happen only in Spain but everywhere and in all parties.

Q. Has that generated internal tensions?

A. In my party there was everything: people who thought that what a pity that the Franco regime had died and ultras liberals who said that pensions had to be privatized. The policy is tanning those edges towards a common project. All parties say they are widening, but it is the opposite. No one fits.

Q. All political leaders have built domes in their image and likeness …

A. Yes, to be told how well they do it. The problem of politics is pride. They lose contact with reality, they are considered little less than Messiah. And those flattering cliques isolate a lot. If they criticize you, you hold on.

Q. Your budgets were made in another economic context. What would change now?

A. It depends on the intensity of the deceleration. In Spain there is political instability, but the economic base is very good. We are growing without inflation, and we have been with an external surplus for six years. The priority of the budgets must be to commit to the reduction of the deficit and the debt.

P. The IMF and the European Commission ask Spain for a fiscal cushion.

A. Everyone here thinks…

Q. The IMF is not everyone.

A. He also says that VAT must be raised at reduced rates, which should not be done. Do not do everything they tell you.

Q. Is there room to lower taxes? Another election campaign is coming and promises return.

A. I think deficit reduction is the big goal. Certain politicians believe that that does not sell electorally, I have failed in my pedagogy, but people like to live in sanitized municipalities and there is a survey that indicates that there would even be people in Spain who would accept that taxes be raised if their tax were really improved wellness. You have to make credible tax policies. You cannot say: ‘I will lower all taxes. (The PP Government uploaded them in the first council of ministers after the 2011 elections). Recovery and job creation depend on deficit reduction and not vice versa.

Q. Within your party there is division of opinions about Vox. Some people think that it is the opposite side of Podemos and who believes that it is a white mark of the PP, an imitator. How do you see it?

R. The president of Vox was from the PP. I do not understand that it says that the PP no longer represents certain things or that it has failed some values. One wants to be Pope of Rome and does not have the habit. Because personal aspirations are not fulfilled, it cannot be said that the party has become disoriented and found another. Sanchez uses a phrase that is my patent: "In politics, the order of the factors does alter the product." You have to go objective to objective, one after another. The objective of the first PP government was to enter the euro. From there came the decree of liberalization of the economy. It was negotiated with commas. What is there to do? To say that the nationalists were devils with a tail? Well, no.

Q. Would the PP be very different if now presided by Soraya Sáenz de Santamaría?

Q. Do you think it is important for a woman to be a candidate for La Moncloa?

A. I am not a feminist because I believe so much in women that I do not need it. Of course it would be good, but not only for being a woman, but for her qualities. Soraya would have been a good president because she knows the Administration very well and is very prepared.

Q. Who do you talk to most: Rajoy or Casado?

R. I don't talk to Casado. With Rajoy yes.

Q. Don't you call him for advice?

A. No, and it seems normal.

P. Rajoy seems to be delighted outside of politics. Do you miss her?

A. Politics is a vocation. Think of Rubalcaba. In Fraga, I thought we were going to die on an executive committee. In the money that Rajoy has stopped earning, which makes an opposition of that caliber with 23 years (property registrar) and is now in the registry giving validity to garage spaces, with forgiveness. Spain has not solved that well; Anglo-Saxons are masters in that, they place you so you don't die of disgust. Zapatero came up with the State Council, which is nonsense, an organ that evaluates legality, not thought. I went out and came back with 56 years. This is a vocation. And he never abandons you.