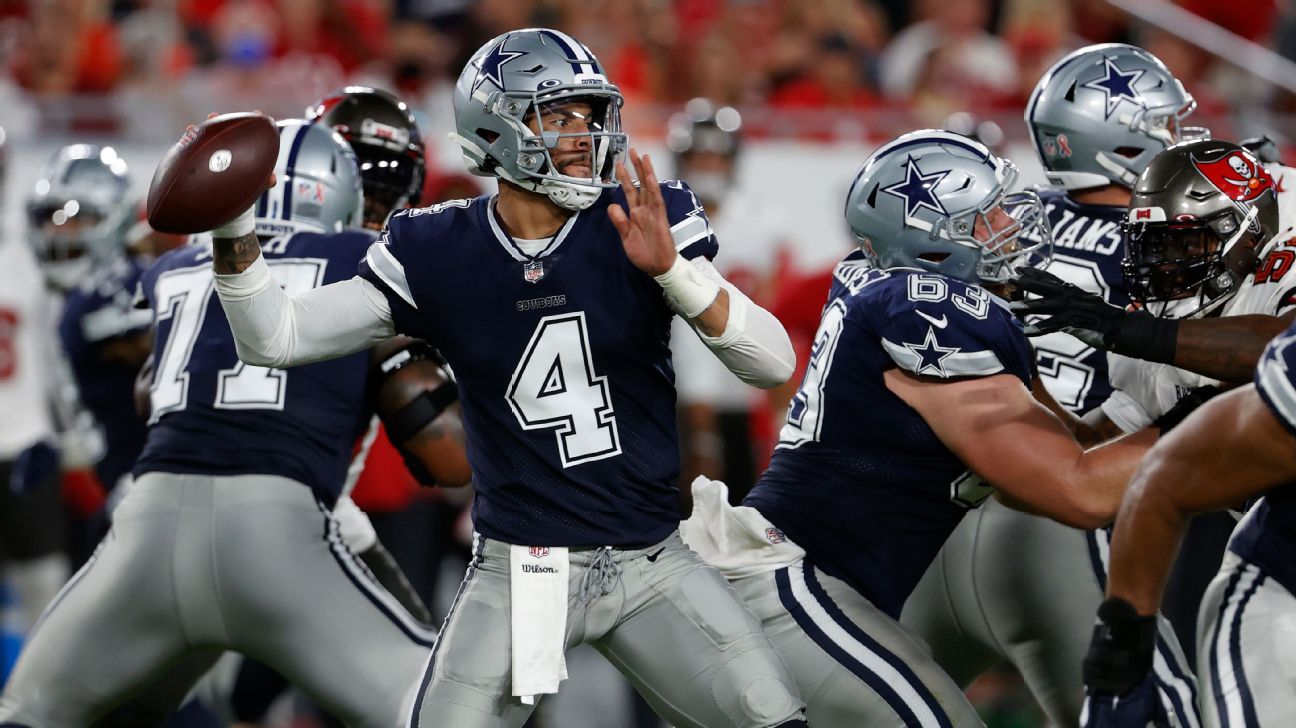 DALLAS – A good majority thought that Dak Prescott could never return to the level of play he showed during the first four games of last season, before he came out on a stretcher in the fifth with a shattered ankle.

In just two weeks into the season, Dak Prescott has managed to erase doubts about the level he would reach after his rehabilitation AP Photo

Others said it was impossible to think that the Dallas Cowboys quarterback would be ready to return to an NFL playing field before half a season.

A few more, when they saw a preseason end in which he hardly practiced, much less played, that Prescott was far from healthy in the ankle, that he was seriously injured in the shoulder and that the Cowboys only wanted to minimize the problem.

But Prescott will enter his third game of the season on Monday Night Football against the Philadelphia Eagles in perfect physical and football condition, as he has shown the world in both games this season.

“I’ve worked hard to get to this point,” said Prescott, 28. “Only I know the suffering and frustration I went through, especially because I couldn’t help my teammates. That’s why my goal was always to be ready from the start of the training sessions. “

Prescott is supporting the confidence of the bettors, who since May, after seeing that he was training, limited but was in the practice field, considered him to be the favorite for the nomination to the Comeback of the Year of the 2021 season, as happened in 2020 , when after a year of rehab, they gave it to then-Washington Football Team quarterback Alex Smith.

Smith himself has considered in repeated public appearances that Prescott must be the Comeback of the Year, especially after watching him throw 403 yards with three touchdown passes, shoulder the team in every respect and lead his team against one of the best. and with the greatest pressure among NFL defenses, that of the champions Tampa Bay Buccaneers in the season opener.

It wasn’t just about the physical appearance. Prescott never doubted, not even in plays that he had to decide to run, after that day was exactly 11 months since his last game, the day he fractured and dislocated his ankle.

His shoulder also seemed to have no problem with 58 passes thrown, 42 completions, after just a couple of weeks earlier he returned to training without restrictions, due to a pull that left him out of camp for a month.

On November 11, 2020, Dak Prescott suffered a serious injury to his left leg, which called into question his future. AP

“I was ready to practice and move on from the day after I felt discomfort,” he commented. “But you had to be smart and take extreme precautions. The team was taking care of myself. When I go out to the field, I can’t think of limiting myself, much less taking care of myself ”. Last Sunday, he was again in complete control of the team. The game plan was different.

They attacked more on the ground than in the air, and Prescott did enough work, including completing 23 of 27 passes for 237 yards, despite two sacks, in the win against the Los Angeles Chargers.

“I’m not surprised at my game,” Prescott said. “I have been preparing for this season since February. Maybe since January, when I started walking again and put my foot on the ground for the first time. “

This Monday night, he will have the opportunity to demonstrate in primetime international television game that he is still on his way. He will face the Eagles, for the first time with Jalen Hurts as a starter.

It will also be the first time he has been at home this season and since he came out in that “cart of misfortunes” on October 10, standing ovation by his fans and rivals.

“I think it will be exciting,” Prescott acknowledged. “They have always supported me and that has been important to me since I appeared in that stadium as a starter (2016). It will be even more special because the stadium will be full, not like last year.

“So since I run outside in the warm-up it will be special and more so with everything we go through in 2020,” he added. The most recent background also helps those who believe in Prescott for the Comeback of the Year over players from other positions. In the past 19 years, 13 times the appointment was to a quarterback.