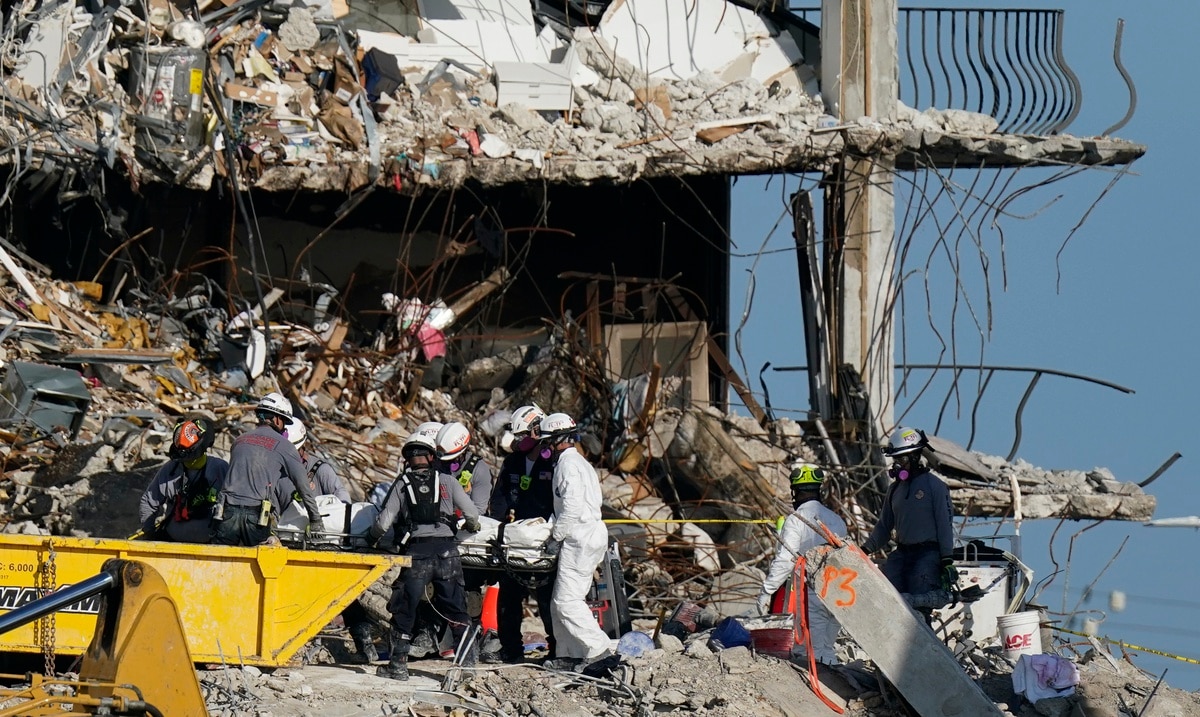 Search teams in the sinister residential building in Surfside, South Florida, rescued four more bodies, bringing the provisional death toll from the collapse on Monday to 94.

Miami-Dade County Mayor Daniella Levine Cava reported in her daily press conference that the number of missing persons due to the collapse of the Champlain Towers South building stands today at 22 while the number of people located is 222.

Levine Cava noted that of the 94 bodies recovered from the rubble of the 12-story building, 83 have been identified by local authorities. The relatives of 80 those identified victims have already been notified.

“The process of making identifications has become more difficult as time goes by,” acknowledged Levine Cava, who specified that the work relies heavily on DNA technology used by forensic doctors’ offices, a process that it can be slow.

“There may be dead people listed as missing until they are identified,” he explained.

The mayor said that there is still no tentative date for the end of operations at the scene of the incident.

At the press conference it was revealed that a member of the search and recovery teams have tested positive for covid-19, despite being vaccinated, and has been temporarily separated, as well as those who were close to him.

Over the weekend, members of the Israeli delegation who joined the search and rescue efforts after the collapse were sacked in an emotional ceremony in Surfside led by Levine Cava, who presented them with plaques and medals of recognition.

Rescuers from Israel marched down a street in Surfside on Saturday in what was called the “reflection march,” in which Levine Cava and the mayor of that city, Charles Burkett, members of the rescue squads, family members, also walked. of victims and disappeared.

Friends and family erected a makeshift memorial with photographs of people who have not yet been located and who are believed to be in the rubble of the Champlain Towers South condominium. (Fernando Medina / Special The New Day) On Friday night, the mayor of Miami-Dade, Daniella Levine Cava, indicated that they have not rescued anyone else, the number of deaths remains at four and the number of missing at 159 (Fernando Medina / Special El Nuevo Día) So far, 127 people have been located (not necessarily rescued at the scene). (Fernando Medina / Special The New Day) In the photo, a makeshift memorial near the scene where families have posted photos of their disappeared. (Fernando Medina / Special The New Day) Levine Cava, warned that the search and rescue mission became dangerous due to the fires that have arisen under the rubble that remained after the partial collapse of the structure. In the photo, photos of the missing. (Fernando Medina / Special The New Day) In the photo, Miami Mayor Daniella Levine comes to a makeshift memorial near the scene where families have posted photos of their missing. (Fernando Medina / Special The New Day) In the photo, coffins ready at the response center. (Fernando Medina / Special The New Day) The figure at the moment and from early in the morning is 4 dead and 159 missing. At least six Puerto Ricans are among those who have not yet been located. (Fernando Medina / Special The New Day) “The good news is that we have the best firefighters and rescuers in the world who know how to deal with a situation like this. If they are hopeful, so are we, ”said the Miami-Dade mayor. (Fernando Medina / Special The New Day) The Champlain Towers South Condominium partially collapsed around 1:30 a.m. on Thursday, prompting a strong mobilization of authorities in the city of Surfside in Miami-Dade County, in the southern state of Florida. (Fernando Medina / Special The New Day) This is how the building was. (Fernando Medina / Special The New Day) In the photo, Jaime Rosenheim prays for his friend IIan Naibryf who disappeared in the building. (Fernando Medina / Special The New Day)

Both are children of Sophía López-Moreira, the sister of the first lady, and Luis Pettengill, both 36 years old, whose identities had already been identified by the authorities, as well as the youngest of the children, Luis López Moreira III, of 3 years old, and 23-year-old nanny Leidy Luna Villalba.

According to the Paraguayan consulate, the bodies will be repatriated to the Latin American country as soon as possible.

Among the bodies recovered and identified last week is that of Juan A. Mora, 80, who, as local media has revealed, was part of the Bay of Pigs operation in Cuba, carried out in 1961 by exiles from the island. against the then Cuban leader, Fidel Castro.

Mora, who at the time of the incident was with his wife, Ana, and the eldest son of the family, Juan Mora Jr., was detained by Cuban forces in that failed operation and was detained for 20 months before being returned to USA.

At the conference this Monday, precisely Levine Cava expressed his “firm support for the protests in Cuba” and called for “a real change that brings us closer to the vision of a free Cuba.” EFE News