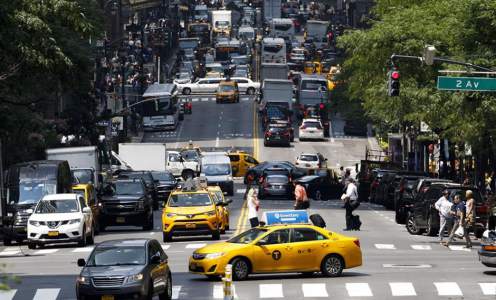 The undocumented community of New York, USA, celebrates this Friday the decision of a federal judge who dismissed a lawsuit that tried to stop the implementation of a law passed this year that gives them the right to obtain driver's licenses in this state.

With this decision in favor of the state's request to be dismissed, the law will come into force, as planned, on December 14 and New York will be able to move forward with its plans to begin accepting applications to issue driving licenses to undocumented, as twelve other states already do, Puerto Rico and Washington DC.

Judge Elizabeth Wolford, of the federal court in the city of Rochester, in the north of the state, indicated in her 32-page decision that Erie County Secretary Michael Kearns has no legal capacity to sue because she did not prove that she has been harmed by law, a constitutional requirement.

The judge, however, did not decide on Keams' argument that state law, known as "Green Light" conflicts with federal immigration law.

On July 9, Kearns filed the lawsuit, against Governor Andrew Cuomo, the Department of Motor Vehicles and the state attorney general, Letitia James, with whom he sought a court order to stop the implementation of the law while its constitutionality is reviewed.

Read: Lula, on leaving prison: "They have tried to criminalize the left"

Kearns, who is a Democrat, argued in his lawsuit that the law is unconstitutional because it would force county employees to violate federal immigration laws and him to hide information from immigration authorities.

Attorney General James said this decision "reinforces our position on the issue: the Green Light Law is legal."

"The law aims to make our roads safer and our economy more prosperous, and allows immigrants to get out of the shadows and register as legal drivers in our state," he said in a statement.

For his part, Javier H. Valdés, executive co-director of the pro-immigrant organization Se Camino, said they are pleased with the dismissal of the "frivolous" lawsuit that defied this law.

He said the "Green Light" is "a critical measure for all New Yorkers that will boost the economy, improve road safety and keep families together."

"With today's decision, we hope that the other unsubstantiated legal challenges (which are pending in courts) will also be ruled out so that we can focus on implementing the law and building a stronger New York," Valdés said.

He said there is another lawsuit filed in the federal court of Albany by Rensselaer County Clerk Frank Merola, a Republican, while Kearns may choose to appeal Judge Wolford's decision. EFE text and photo.