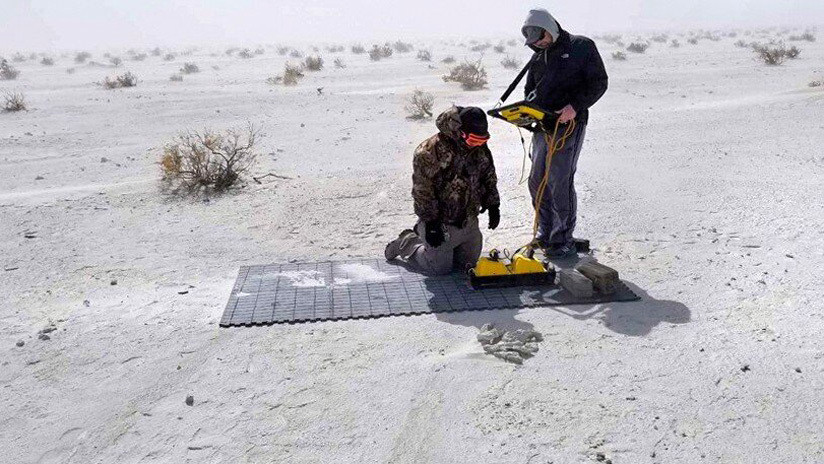 The technique could be used to recreate in 3D the movements and interaction of the first humans, animals and even dinosaurs.

A series of prehistoric footprints fossilized and invisible to the human eye have been discovered thanks to a novel georadar technique.

This finding could allow recreating the movements and interaction between humans and animals from 12,000 years ago, in the Pleistocene, reports Cornell University (USA).

The 'ghost' footprints – which remained hidden on the sandy ground of the White Sands National Monument in the state of New Mexico, USA – were discovered thanks to a ground-based radar (GPR) scan. English).

Thus, when passing a sensor on the surface, it sends radio waves on the ground, which bounce so that scientists can create a 3D image of what is hidden underground in a non-destructive way, without needing to dig.

"We never thought about looking under the footsteps, but it turns out that the sediment itself has a memory that records the effects of the animal's weight and momentum in a beautiful way," said Thomas Urban, a researcher at the aforementioned educational institution and author. Main job.

And he continued: "It offers us a way to understand the biomechanics of extinct fauna that we had never had before."

With the help of the GPR analysis, the scientists managed to reveal 96% of the footprints of humans, mammoths and giant sloths, as well as other large vertebrates.

The researchers hope that in the future this technique will allow them to better understand the activities and daily life of the first humans, when they were outside their camping or hunting areas, that is, the two types of archeological sites best studied so far.

"But there are bigger implications than this particular case study" since "the technique could possibly be applied to many other fingerprint sites around the world, potentially including those of dinosaurs," the academic concluded.