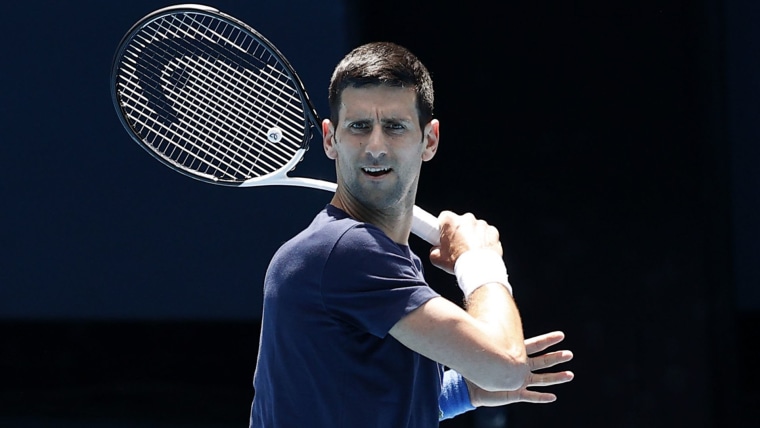 MELBOURNE, Australia (AP) — Novak Djokovic knew he had tested positive for COVID-19 when he attended a newspaper interview and photo shoot at his tennis center in Serbia last month, an “error in judgment” because he should immediately isolated.

In a statement posted on social media on Wednesday, the tennis star also blamed “human error” for his support team not declaring that he had traveled in the two weeks prior to arriving in Australia.

The Serb’s visa was first revoked and then reinstated, in a controversy over whether he should be allowed to enter the country despite not having been vaccinated against COVID-19. The case has sparked outrage in Australia and marred the run-up to the Australian Open.

Djokovic admitted the lapses and said he wanted to clarify the “misinformation” about his movements after his positive last month, although he did not specify what inaccuracies he was referring to.

Djokovic’s official social media accounts released a statement as he trained at the Rod Laver Arena, his third rehearsal since being released from immigration detention.

The situation of Djokovic, defending champion of the Australian Open, where he has been crowned nine times, remains in limbo ahead of the first major of the season, which opens on Monday.

The world number one won a procedural legal battle on Monday, allowing him to remain in Australia. However, he still faces possible deportation because his exemption from the COVID-19 vaccination rules has been called into question. The decision depends entirely on whether the Australian Immigration Minister considers that expelling him would be in the public health and safety interest.

Deportation could carry penalties such as a three-year barred entry to Australia, a bleak prospect for a player who has won almost half of his 20 Grand Slam titles there.

Court documents detailing Djokovic’s positive sparked speculation that the tennis player attended various events in his native Serbia last month. Questions have also been raised about errors in his immigration form that could lead to the cancellation of his visa.

On the form, Djokovic denied having traveled in the 14 days prior to his flight to Australia. The Monte Carlo-based star was spotted in Spain and Serbia in that two-week period.

In a statement posted on Instagram, Djokovic said there had been “painful” comments on the subject. He stated that he wanted to deal with the “constant misinformation”, with the aim of “alleviating concerns in the community about my presence in Australia”.

The 34-year-old athlete explained that he had undergone rapid tests that were negative in the days before he returned positive in an analysis that was performed only “as a precaution”, since he had no symptoms, after attending a basketball game in Belgrade on December 14.

He received the result late on December 17, he said, and canceled all his commitments except for an interview with the French sports daily L’Equipe the following day.

“I felt compelled to give it (the interview) … but I made sure to observe the distance and wear a mask, except when they took the photos,” Djokovic said. “While it is true that I went home after the interview to self-isolate for the required period, on reflection, I recognize that this was an error in judgment.”

Serbia requires anyone infected with COVID-19 to self-isolate for eight days, but they can leave sooner if they test negative.

The L’Equipe reporter who did the interview wrote in the newspaper that he and the accompanying photographer wore masks during the session — and kept their distance except for a brief moment when Djokovic said goodbye. The reporter said he tested negative for COVID-19 on Monday, but did not mention the status of the photographer.

Regarding the travel declaration, he said that it was submitted on his behalf by his support team.

“My agent sincerely apologizes for the clerical error of selecting the wrong option,” he said. “It was human error and in no way deliberate. My team has provided additional information to the Australian government to clarify this matter.”

A decision could take a few days, although the draw for the Australian Open draw is expected to take place on Thursday.

Immigration Minister Alex Hawke’s office reported that Djokovic’s legal team had submitted other documents, adding: “Naturally, this will affect the timeframe for a decision.”

At issue is whether Djokovic has a valid exemption from rules that require anyone traveling to Australia to be vaccinated. The waiver is granted to people who have recently recovered from COVID-19, as would be the case with Djokovic.