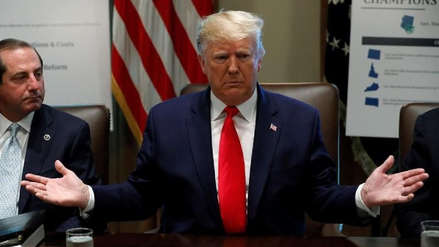 The American president, Donald Trump, canceled his plan to hold the next G7 leaders summit at his own golf club in Miami (Florida), after a strong controversy over the benefits that would have meant for his business organization to host the appointment there.

"Due to the crazy and irrational hostility of the media and the Democrats, we will no longer consider Trump National Doral, in Miami, as the headquarters (of the summit) of the G7 in 2020," Trump wrote in his latest Twitter account. Saturday time.

"We will immediately start looking for another place, including the possibility of (the official presidential residence of) Camp David (Maryland). Thank you!"

The head of the White House interim cabinet, Mick Mulvaney, had announced last Thursday the selection of Trump National Doral as the venue for the next summit of the so-called Group of 7 (G7), which in 2020 corresponds to host the United States and which will be held from June 10 to 12.

Mulvaney justified the decision by considering that the golf club was "by far the best complex" to organize the summit and assured that Trump would not profit from the event, but immediately generated a wave of criticism and the impression that the president was looking for refloat a place whose income has fallen 69% in the last two years.

"I thought I was doing something very good for the country by using Trump National Doral, in Miami, to bring together the leaders of the G7," Trump said on Twitter minutes before announcing his decision.

"It's huge, great, with hundreds of acres, next to the Miami International Airport, it has tremendous ballrooms and meeting rooms, and each delegation would have had their own buildings of 50 or 70 rooms," he continued.

Trump said his club was "better than other alternatives" and that he was willing to organize the G7 there "without any benefit or, if possible legally, at zero cost to the United States." "But, as usual, the hostile media and their Democratic partners went crazy!"

The announcement about Doral's selection had come at a time of strong scrutiny about Trump's decisions, both those related to Ukraine that have earned him an investigation prior to a political trial and his order to withdraw US troops from northern Syria just before the Turkish offensive. (EFE)