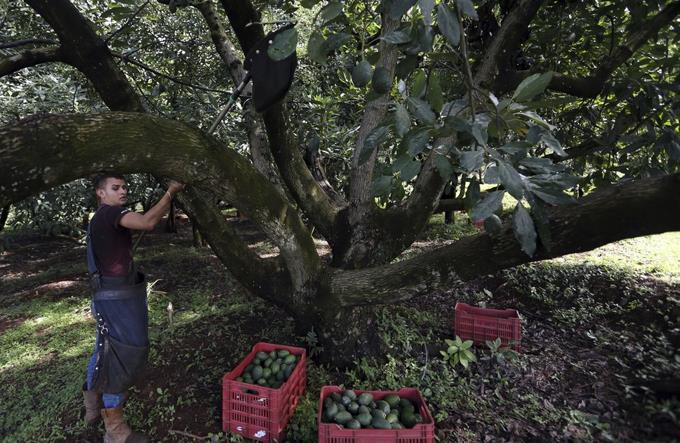 Small avocado farmers armed with AR-15 rifles take turns managing the security of a checkpoint against thieves and extortionists of drug cartels in San Juan Parangaricutiro, in the Mexican state of Michoacán, the heart of the production of this fruit that locals call "green gold".

The rise of avocados in the region, fueled by increased consumption in the United States, brought areas of western Mexico out of poverty in just 10 years. But the smell of money attracted gangs and hyperviolent cartels that have hung corpses from bridges and scared the police, and the increase in violence is threatening this new prosperity. The recent US warning that it could remove inspectors from orchards caused a chill in an industry with exports of $ 2.4 billion annually.

Some producers are taking up arms. At the San Juan Parangaricutiro checkpoint, the guards are calm but alert. They say their crops are something worth fighting for.

"If there were no avocado, I would go out to look for work, possibly to the United States or elsewhere," said one of the guards, Pedro de la Guante, whose small plantation gives him more benefits than any other crop, legal or illegal.

Luis, another guard who asked that his last name not be used for fear of reprisals, listed the problems that came to the town with the avocado boom: extortion, kidnappings, cartels and fruit theft. These are the reasons why they mobilize, he said.

Mexican avocado growers have been living in fear of assault and blackmail for years, but the situation acquired an international look in mid-August, when a team of inspectors from the US Department of Agriculture was "directly threatened" in Ziracuaretiro, a locality west of Uruapan, in Michoacán. Although the agency did not explain what happened, local authorities said a band raided the truck in which the inspectors were traveling at gunpoint.

"In future situations that result in a security breach or show an imminent physical threat to the welfare of APHIS staff, we will immediately suspend program activities," the US Department of Agriculture (USDA) said. a letter, referring to the Animal and Plant Sanitary Inspection Service by its acronym.

Such a measure could block shipments and devastate the industry that caters to American consumers hungry for guacamole and avocado toast. In 1997, Washington lifted the veto imposed in 1914 on Mexican avocados to prevent the arrival of weevils, scabs and pests to local gardens.

The Association of Producers and Packers Exporters of Avocado of Mexico, based in Michoacán, published the letter, an unusual fact that some in Uruapan interpreted as a gesture to alert criminals of the risk of ending the most prosperous industry in the state if the US inspectors stop approving exports. Neither the association nor the Department of Agriculture responded to requests for comment.

The police chief of a town in the western avocado belt, who asked not to be identified, described what it is like to live with the Los Viagra cartel. The organization is so present that he does not go to nearby Uruapan without an escort of armed bodyguards. The bank of Michoacán receives its unusual name from the custom of its founders combing with a lot of hair so that their hair is tipped.

“They have done everything, extortion, collection of floor, they have flown drones,” said the policeman. "They would want to put (drug) labs in the orchards."

But now Viagra is also the goal. The violent Jalisco Nueva Generación cartel is trying to enter Michoacán on several fronts. In August, the group hung nine bodies at an overpass in Uruapan and left another 10 torn or thrown on the road. On the bridge they placed a banner with the phrase "Be a patriot, kill a Viagra".

In southern Michoacán, in a warmer region where lime is grown, gunmen from the Jalisco cartel ambushed and killed 13 state police in mid-October. The attack terrified the police so much that when they went to retrieve the burned vehicles of their companions they worked so quickly that they left behind a crushed, charred skull with bullet shots.

The cartels, the police and the guards are equally scared of the violence of the Jalisco gang.

In the cattle town of Tepalcatepec, which is on the border of the state of Jalisco, heavily armed guards, apparently hired by a local gang, stand guard 24 hours a day at a sniper stand atop a hill to face to the raids of the cartel. One of the men, with an assault rifle on his shoulder and who refused to be identified, went down the hillside to throw a graphic reporter out of the area telling him that he had a gun pointed at his head.

As in much of Michoacán, violence is largely masked by the apparent prosperity generated by the fruit: kilometers of fences enclose seemingly endless plantations of avocados, whose branches support the heavy harvest. The new packing plants seem to emerge overnight.

But according to Hipólito Mora, who in 2013 founded the civil self-defense movement of the state, appearances are deceiving. The new plants were robbed by armed robbers three times in a week by thieves who apparently knew exactly when they would have cash to pay the farmers.

"If businessmen were to close their businesses, the economy would go down completely in the region," said Mora, who also grows limes.

43% of world avocado exports come from Mexico, mostly from Michoacán. The USDA has an almost permanent delegation of inspectors in the country.

A few weeks after the incident with the USDA inspectors, the manager and an employee of an avocado plantation were kidnapped at gunpoint in Ziracuaretiro, allegedly by the municipal police. Seven agents are being investigated for the case, and the police department has been dismantled.

Today, heavily armed state police patrol over Ziracuaretiro and its mayor, José Rodríguez Baca, is worried. He has seven municipal agents in prison, illegal loggers cutting down pines in the municipality and a possible economic crisis in the making.

"It is a concern for everyone," Rodríguez Baca said of the American warning and violence in his town. "If we close the doors to the United States it would fall apart."

His municipality exemplifies the deficiencies of state and federal strategies against crime, whereby the police, the army and the National Guard go to troubled areas, demonstrate strength for a few weeks and then leave. State police patrolled Ziracuaretiro earlier this year, before US inspectors were assaulted, but withdrew in July to move to another troubled area.

Avocado growers feel scared, alone and trapped in the middle of this situation.

Carlos Martínez is a third generation farmer with a plantation of 2.5 hectares (6 acres) in Ziracuaretiro that, in a good year, can produce up to 50 tons of avocados, valued at about $ 100,000.

"It's all about insecurity (…) that affects third parties," Martínez said, referring to both producers and customers.

Martinez has not yet stolen any shipment of avocados, a recurring complaint in Michoacán, but they do steal the fruits of the trees. Like most producers, he placed chain fences and hired a guard. But the fear of a kidnapping or a call for protection payments is what scares him the most.

In San Juan Parangaricutiro, De la Guante is an example of how avocados have removed many of the state's poverty.

He was a farmer who worked for seasons until 11 years ago he planted avocados on one hectare (2.4 acres) of sandy soil. That relatively small garden now gives up to 10 tons of fruit. This year he was lucky to sell them in August, when the price was high, at 40 pesos (2 dollars) per kilo. This means that De la Guante won at least $ 15,000 this year.

Adriana Villicaña, a professor at the Universidad Católica Univa in Uruapan, said this economic boom has helped many.

"There are many women working in packing plants, and most are described as single or single mothers," said Villicaña.

But this prosperity does not reach everyone. The around 15,000 avocado pickers in the region have an attractive salary for the area, but it is a temporary and physically demanding position because you have to climb the tree with long sticks to get the fruit, which means that many cannot do it beyond 45 years old

Villicaña, who is also part of an advisory council on citizen security in Uruapan, said the problem of crime in the region would worsen if this industry collapses.

"If there was no avocado, what are they going to be used for?" Villicaña asked. "Most likely, they are outsourced to do crime work."