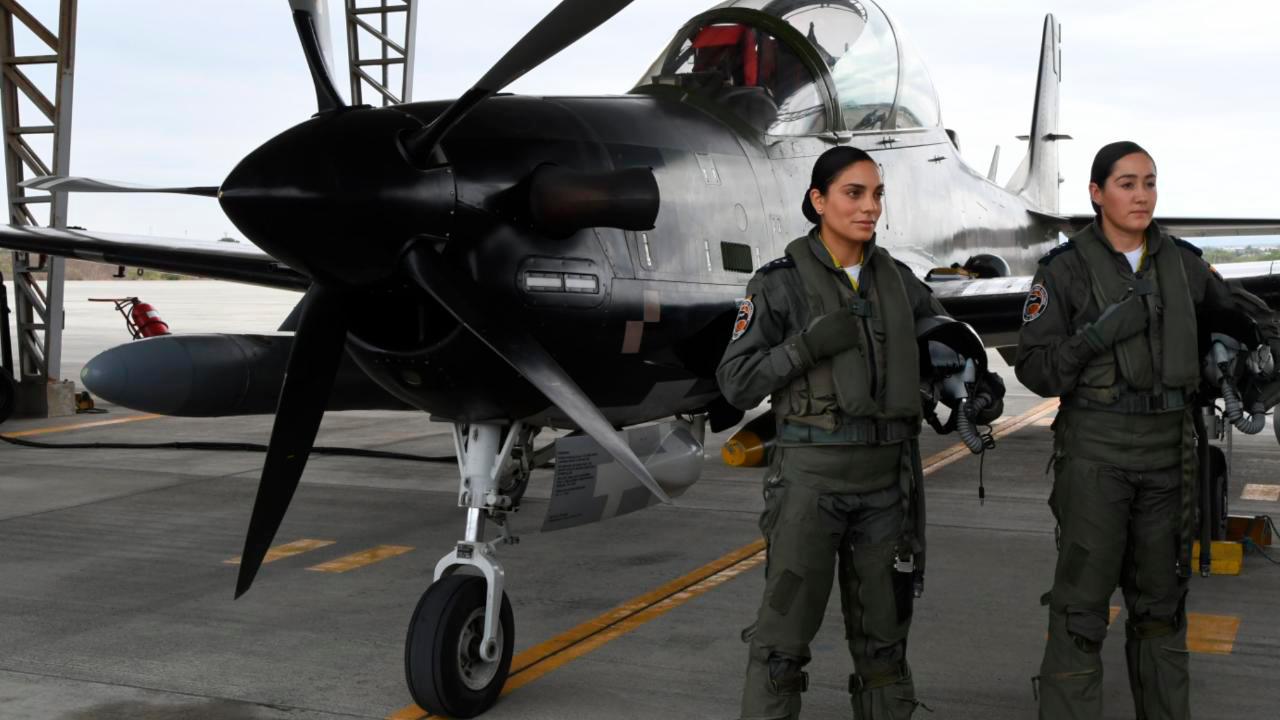 Lieutenants María Cueva and Jazmín Pérez have made history in Ecuador by becoming the first two female Air Force (FAE) fighter pilots this Friday, at a graduation ceremony at the Manta air base, on the country's central coast .

"The road in the Armed Forces is long, but this is a step that has been taken, a door that opens, and tomorrow I would like many other women to overcome the road," he told Efe Cueva, 26 and native of Quito, hours before graduation.

Together with his companion of arms Pérez, 28 and the Andean city of Ibarra, both culminate today an extensive formative period that began first with the preparation as cadets in the Military Aviation Superior School for four years.

Subsequently, they passed another selection process to be able to enter the "Ready for Combat 2" course, to acquire the status of war pilots.

In November of last year, these two young men and six other male lieutenants began their training as aviators that included a theoretical part and another practice with 40 hours in simulator and 80 of flight in aircraft.

"We are prepared for countless missions, but our country is at peace and we aim to maintain defense in internal security missions," Cueva explained.

The last occasion in which Ecuador intervened in a war was against Peru in the so-called "War of Cenepa", between January and February 1995, when the armed forces of both countries clashed.

Today the defense scenario is quite different, with new and old challenges such as transnational crime and drug trafficking, so the lieutenant highlights that the operations in which they will intervene are recognizing the northern border with Colombia, in the interception of illegal traffic or the monitoring of strategic hydrocarbon facilities.

At the ceremony, the 65th promotion of pilot officers graduated in which the new airmen made an air show that included the landing on a platform at the base of Manta, before the watchful eye of the Air Force General Commander, the Lieutenant General Mauricio Campuzano, who presided over the act.

The piloting devices are the Super Tucano A29-B turboprop type, manufactured by the Brazilian company Embraer.

They are versatile military training airplanes, with fourth generation technological devices, ability to be bombers and incorporate simulated technology to be fighters with air-to-air instruments.

"To control this weapon requires an arduous and rigorous training. The two officers have successfully completed this course," said Commander Jorge Rueda in a pre-ceremony appearance.

The brand new graduates make up the Falcon 2313 squad, a tactical combat unit of the FAE, the official said.

Cueva has been the "oldest officer" of the promotion, which means that she obtained the best qualifications as a cadet and that she has had to command her unitmates.

"The relationship is fairly equitable with the male staff and I have always had the respect of my colleagues," said the lieutenant, who is currently single and has no plans to start a family in the short term given the demands of the range.

However, do not rule out that option as long as "it is planned" and "does not affect the operability" of military aviation.

"This race demands a long time demand and the physiological condition of pregnancy would not allow me to continue as an operational pilot of the FAE," he argues.

Although there are at least eleven female pilots graduated in rescue and transportation units in the Air Force, Cueva and Pérez are the first to do so in the field of combat.

And in the 54 years of the squad to which they belong, it is an achievement, since only five years ago the women began the path in the first promotion of weapons of Ecuadorian aviation.

The FAE also has several officers specialized in other branches and among the most veteran are some with the rank of colonels, the lieutenant specifies.

In October of next year the FAE will celebrate its centenary in parallel to the same anniversary of National Aviation Day.

"My partner Jasmine and I are very grateful and know that we are under the gaze of military command. Many people have put their hopes in us and we will not let them down," concludes Cueva, aware of the milestone that marks the military history of the country .