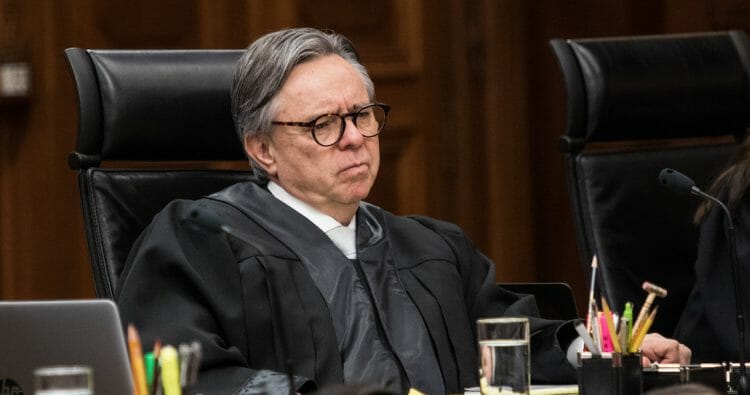 Mexico City, (SinEmbargo) .– Eduardo Medina Mora, Minister of the Supreme Court of Justice of the Nation (SCJN) submitted his resignation this Thursday.

Medina Mora entered the Court in March 2015 and his term would expire in 2030. The resignation presented is an unprecedented event since the constitutional reform of 1994, which created the current Supreme Court.

In accordance with article 98 of the Constitution, the resignations of the SCJN ministers proceed for serious reasons and once submitted they are submitted for acceptance to the Chief Executive, if he accepts it, sends it to the Senate for approval.

On June 5, in a column by Salvador García Soto published by El Universal, a report by the National Crime Agency, from the United Kingdom Government, detected millions of transfers made from Mexico to the accounts of the Minister of the Supreme Court of Justice, Eduardo Medina Mora, at the HSBC UK BANK in London, for a total of 2 million 382 thousand 526 pounds sterling, which were deposited in the last two years.

He adds that derived from that report, the Department of the Treasury of the United States, documented that between 2016 and 2018, the Mexican Minister also received in his accounts of HSBC USA, 2 million 130 thousand dollars in the same years.

According to the information published in El Universal, “the transfers, both to Great Britain and to the United States, which in total amount to almost 102 million pesos, far exceed the income that as Minister of the Supreme Court of Justice of the Nation Eduardo Medina Mora obtained, since his appointment by the Mexican Senate in 2015 ″.

A day later, the Senate asked the Financial Investigation Unit (FIU) to analyze the bank transfers of Minister Eduardo Medina Mora, after being pointed out about alleged millionaire transfers abroad.

This was reported by the head of the FIU of the Ministry of Finance and Public Credit (SHCP), Santiago Nieto Castillo, through his Twitter account and without mentioning the Minister of the Supreme Court of Justice, Eduardo Medina Mora.

Nieto Castillo said that it will act according to law and in case there are indications of an illegal activity will proceed.

"The policy of the Government of Mexico is zero tolerance for corruption," he wrote.

“There is information from the United States Government, they passed it to the Financial Intelligence Unit, but this does not mean that (Eduardo Medina Mora) is guilty,” added the Chief of the federal Executive.

In 2000, after completing his work as Corporate, Legal and Planning Director at the Desc Group, Eduardo Medina Mora Icaza was called by then President Vicente Fox Quesada (2000-2006) to lead the late National Security Research Center ( Cisen) He held the position until 2005. Later, and only until 2006, he was Secretary of Public Security.

The Calderon government was the one that most required it in the past 13 years with service payments that totaled 99 million 847 thousand 515 pesos. For example, the Ministry of Finance and Public Credit (SHCP) provided five months of training for Oracle and charged 446 thousand 518 pesos.

With Calderón, Compusoluciones y Asociados SA de CV, he was also in charge of “express” training in Computer Science at the Federal Electricity Commission. For two days, he charged 68,250 pesos (of the time).

Between 2013 and 2014, when Eduardo Medina Mora celebrated his first year as Ambassador of Mexico to the United States, Compusoluciones y Asociados SA de CV provided courses to the Ministry of Finance and Public Credit on UML and Oracle, as well as Systems Development methodology . Each year, the training was ten days long. In 2013, the payment was for 264 thousand 445 pesos and in 2014, for 298 thousand 430 pesos.