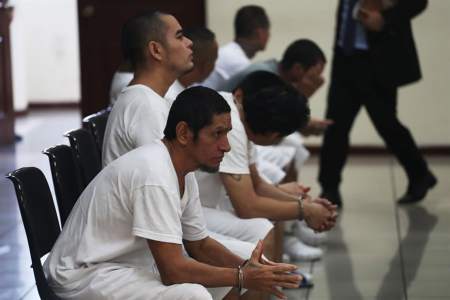 An anti-mafia court in El Salvador on Tuesday resumed the trial against 426 frontmen, gang members and historical leaders of the Mara Salvatrucha gang (MS13) on charges of homicide, terrorist organizations, money laundering and arms trafficking.

The security authorities only transferred 16 of the accused, while the rest are in different prisons in the country and witness the trial by video.

The defendants were captured under the so-called "Operation Cuscatlan" in February 2018, one of the largest in recent years, and in which goods for more than 1.8 million dollars were seized.

Among the leaders facing the trial since Monday are Dionisio Umanzor, Pedro Rivas and Borromeo Henríquez, considered as part of the maximum leadership structure of the MS-13.

The trial is expected to testify at least 34 witnesses, from a previous list of 150 people, and conclude on November 1.

Investigations by the Prosecutor's Office indicate that a group of the gang's alleged frontmen received money from said structure to launder it through small businesses.

70% of the profits generated by all businesses that received illicit funds were for the gang and 30% were left to the owners of the businesses.

Read: Defenders and detractors of Álvaro Uribe, face to face in front of the Palace of Justice

The operation that gave rise to this process was recorded after the so-called "Jaque" of 2016, which was the first direct hit to the finances of the MS-13 with the dismantling of a network that managed the assets of the gang.

According to the U.S. Department of Justice, the MS-13 has weakened since 2017, when the U.S. Government and the Northern Triangle of Central America (El Salvador, Honduras and Guatemala) increased their police and judicial coordination to combat that group. .

However, the strongest operations against this criminal structure began in 2016.

El Salvador is besieged by the MS-13, which the United States seeks to eradicate, Barrio 18 and other minority gangs that have more than 600 groups throughout the country and to which the Government attributes most of the crimes that occurred in its territory. EFE text and photo.