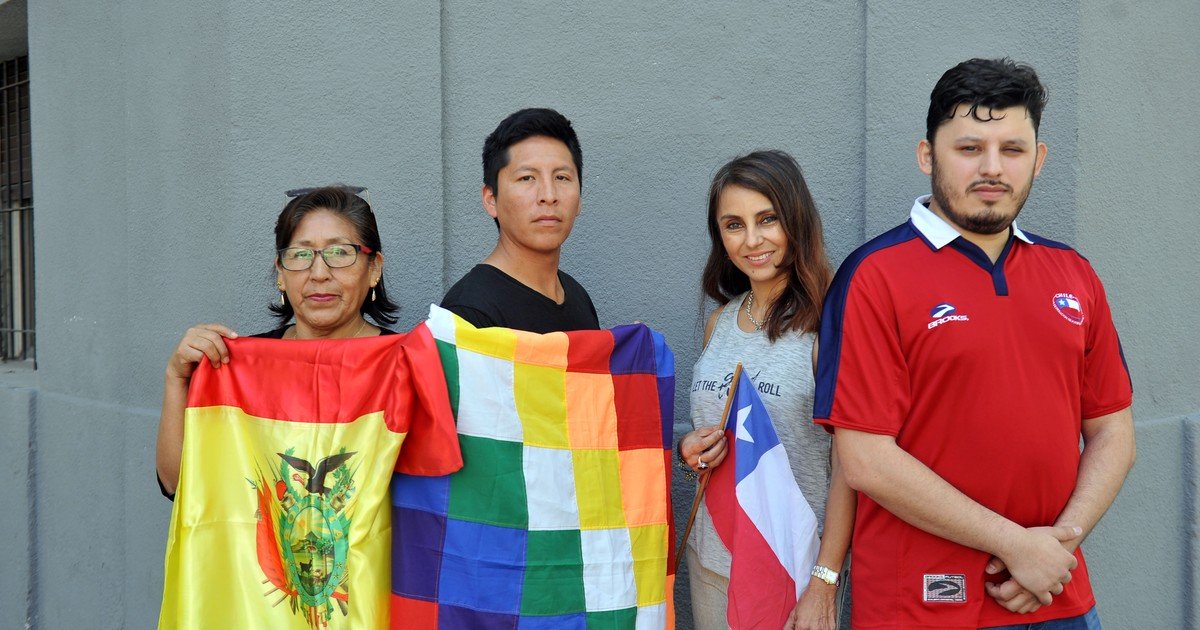 Celia Quintana, Alain Laurence Cretton, Iber Mamani and Fernanda Martínez have very different stories, but they share a characteristic: they have lived in Argentina for many years and in recent days they divide their attention between the elections, in which governors and mayors will vote, and the political situation of Chile and Bolivia, their native countries. Gathered by Clarín, they reflect on current affairs from their personal stories.

Amid two very different scenarios, both nations jumped to the forefront of international news in recent days. On Friday the streets of Santiago were filled by a million people protesting on the seventh consecutive day of mobilizations, in the midst of an unprecedented crisis in the trans-Andean country. In Bolivia, meanwhile, there were riots and the opposition denounced fraud in the presidential elections. On Friday, finally, the electoral court confirmed the victory of Evo Morales in the first round.

Fernanda Martínez settled in San Isidro in 1996 for the transfer of his diplomatic father and quickly became part of Argentine society. "I feel one more, my children are Argentine, this year I voted and I am studying nursing. I am grateful that this does not exist in Chile," he says, getting into one of the main claims of those who have been mobilizing since last week in Santiago and Valparaíso. "Access to education is very complicated, there are no state universities. Those who study are those whose parents can afford it, sometimes with a lot of effort," he graphs and argues that for her the educational gratuity of Argentina is "gold dust."

His compatriot Alain Laurence Cretton is 29 years old and arrived in Buenos Aires at six due to his father's labor move and due to health issues. "I have congenital glaucoma and they suggested we come to attend me, then we settled. As I grew older I got involved with the community," he says. He is a contributor to the "Chilenos en Buenos Aires" fanpage, where they upload academic and legal information to help residents. He also studied architecture and worked at the CBC to guide the entrants.

The outbreak became the hottest topic of conversation in the spaces of Chileans in Buenos Aires (of this group only 18% voted for Sebastián Piñera) and, as the days go by, they analyze the causes. "When you see the situation in Chile, you cannot understand how if it looked so stable, with low inflation, improvement in all indicators … this social explosion happens. There are two ways to explain it, in my opinion: from the statistical and how it affects families, workers and retirees, "says Alain. He points out that, in the 80s, the statistics compared between Argentina and Chile were much more favorable in our country, but that situation was reversed. "After the dictatorship there were governments of center-left and center-right, a line in the economic of commercial opening, opening to the world, insertion in the market was maintained. But that social mobility has not been with the same speed for all nor has reached all still ", remarks.

According to their experience, Chileans who emigrate to Argentina can be divided into two groups. Those who came through the dictatorship and formed their lives here and, from the 90s, the students who arrived to access education.

In parallel, Fernanda considers that "it is a country that is macroeconomically very good, but there is a lot of inequality and the middle class is very tight. The AFPs, schools, salaries that do not reach, medicine is very expensive, also the remedies, the Transportation is expensive and used a lot. The subway climb was the drop that overflowed the glass, but only the tip of an iceberg. It is a very tidy country but also very obedient and that is not so good. At some point we had to say many things and there was no space. "

Alain compares the Chilean situation with a volcano. "It can be quiet hundreds of years but it has a great energy contained and how much it explodes it throws everywhere and everything is on," he says. He also compares the "that Piñera leaves" with the "that all leave" of Argentina in 2001: "It is the disagreement with a whole political arc".

There were also complex days at the political level in the Plurinational State of Bolivia during the counting of votes in presidential elections, with allegations of fraud and the opposition candidate Carlos Mesa who called "civil resistance."

Celia Quintana is 63 years old and arrived in Argentina 26 years ago from Miraflores, La Paz. For almost two decades, he lives in Villa Celina, La Matanza Party, where he is part of an NGO, has an adult school and a dining room. "Here they never treated me badly. Villa Celina 18 years ago was very small and now grew a lot," he says in reference to one of the central areas for the Bolivian community.

He lived the 13 years of the Evo Morales government from a distance and in recent days he was alarmed at the news that came after the presidential elections. "I worried, I was afraid that there were dead or wounded, but luckily the situation calmed down and I think that from now on everything will be all right," she says hopefully.

Celia Quintana arrived in Argentina 26 years ago and is part of an NGO in La Matanza. (Photo: Lucia Merle)

In the early 90s, the Bolivia that Celia left, he says, was very different from the current one. "You couldn't get any milk. I lived in Pando and there was a massacre: it was a parade of corpses all day to the cemetery, it was tremendous," he says. Regarding the situation in his country in recent years, he says: "While there were problems in this last election, Bolivia improved a lot with Evo Morales."

The history of Iber Mamani, a 31-year-old Aymara indigenous and social and political activist for the rights of migrants and native peoples, also has Villa Celina as a point of reference. In his case, he came at age five and integrates a family business of blacksmithing, while fighting for the rights of his community and providing free advice to migrants. "After the murder of a friend of mine, Franco Zárate, in 2015, many young people began to organize and denounce acts of racism in Argentina," he says.

Iber Mamani is an Aymara indigenous and militates in Argentina for the rights of his countrymen. (Photo: Lucia Merle)

The elections on Sunday await from their community and ask, among other issues, for the current Migration mechanisms to be revealed. "From the DNU that modified the law there have been racist outbreaks. They generated an idea of ​​associating migrants with crime and drug trafficking when here 5% of the population is migrant. Today migration rates rose 1000% and the Radex system is applied, which is bureaucratic and not very accessible, "he explains in reference to the new online management of immigration procedures. Among other actions, Iber integrates the House of the People in Celina, an independent space with people from different organizations that are dedicated to advise on immigration procedures to obtain the DNI.

Regarding the situation in Bolivia, Iber's position is firm with respect to the Morales government: "I have direct contact with my family there, three weeks ago I was. Before I was one of the poorest countries and when I returned I saw roads, social policies and of infrastructure, vindication of the indigenous sectors, poverty, child mortality has been reduced. My parents have a dignified bonus that allows them to move forward. " He highlights that among the Bolivian community in Argentina, 82% voted for Evo in this election and defines Bolivia as "a country that shows the world that policies can be generated in favor of all sectors." On the elections there, he says: "Friday was defined and Evo won. There was a call for opposition violence and it was a small sector. They are very different contexts with respect to Chile."

Sitting at the same table in a talk that lasted for an hour, the four establish some parallels in their experiences and also many differences. This weekend they remain attentive to each reality that develops simultaneously: the one that their families live abroad and the Argentine election, in which they will also be protagonists.