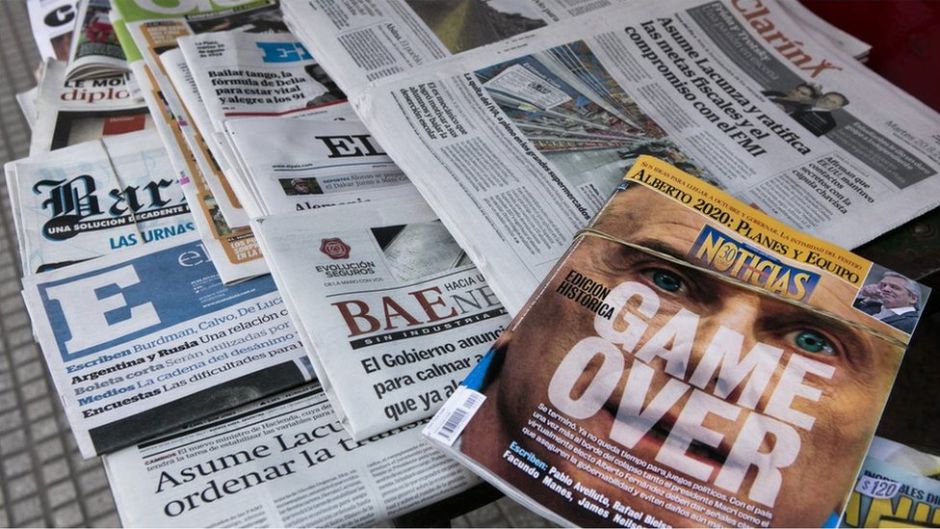 Understanding Argentine politics, full of conspiracies and economic crises, is like trying to learn a language. Regarding the presidential elections, our correspondent Daniel Pardo summarizes keywords

Everything is fine for the foreigner in the cafeteria of Buenos Aires, accompanied by a cut and a half moon, until the political section of the newspaper opens.

There begins a frustrating reading comprehension exercise that is not resolved with the Google translator or years of residence in the country.

Politics is complex everywhere, of course. But in Argentina it is necessary to go beyond the key names and the understanding of the political system.

Perhaps it is because of a culture of secrecy, opacity and informality in the dissemination of official information; or because the political history of the country is full of conspiracies and unresolved judicial cases; or maybe it's because this is the country of lunfardo, of word games, of a culture made by immigrants with an eccentric lexicon that seems dialectic.

But even with that knowledge, frustration persists: why do so many presidents fail to finish their term? How can it be that corruption does not pass a political invoice? Who explains that an exporting power does not leave the economic crisis?

This October 27 there are elections in Argentina. Six candidates compete, including the president, Mauricio Macri, and Alberto Fernández, an ally of former president Cristina Fernández de Kirchner, who is launching as vice president.

As a prelude to the elections, let's look at five concepts that can help you understand Argentine politics and thus enjoy, even more, the time in Buenos Aires coffee.

Most of the time, when the government changes in Argentina, a new productive model is imposed.

There is no continuity in economic policy. They call it the “pendulum,” and its result has been constant crises that, among others, made many of them financially skilled.

The less expert can spend the day stuck to the news of the dollar. With a traumatic history of currency runs, people know that their purchasing power collapses when the dollar increases.

The Macri government based its economic policy on the support of international markets. With that, as the confidence was diminishing, the economic traumas woke up and the call “country risk” happened to lead the news next to the dollar.

Created by JP Morgan, the "country risk" indicates a country's ability to pay off its debt. The more risk of default, the greater the number.

Getty Images Country risk is so popular in Argentina that the media reports the index in real time.

Argentina, the leading country of dozens of defaults or suspension of payments in the past, exceeded this year the 2,000 points, one of the highest "country risk" in the world. That is to say: in a few markets it is as risky to invest as in Argentina.

Then, a term that is reduced to the financial world in another country has passed the most popular social media memes.

Although the elections in Argentina end up defining between two political currents, Peronist and anti-Peronist, within these there are hundreds of divisions. Of "internal".

The Argentineans, writes the anthropologist Alejandro Grimson in his book "Mythomanias Argentina", "have a great capacity to associate at the same time as to disintegrate into small sides."

There is a fact to illustrate: of the 135 deaths that occurred in brave bar fights in the last 18 years, 40% were due to quarrels between fans of the same team, according to Salvemos Fútbol, ​​a civil association.

AFPHA year ago Alberto and Cristina were estranged. He was a tough critic, from Peronism, of his second term. Today, against all odds, they are allies.

The internal, then, dominates social life in Argentina. And in politics it is a key word, because it not only reveals a clash of positions, but introduces chess to the possibility of an alliance that shakes the board.

A year ago, Peronism was full of interns. The "Peronist intern" was Macri's greatest advantage on the road to re-election.

But the economic crisis and the unexpected move of Kirchner to launch as vice president of Alberto Fernández made, in a matter of months, the Peronism was unified.

Also, those who used to attack themselves with powerful adjectives – Kirchner and Fernández among them – now have friends.

In fact, one of the questions that Argentines ask in the face of elections is whether, in case Fernandez wins, he will be unmarked from Kirchner. If there will arise, therefore, an internal one.

It is believed that it was the journalist Jorge Lanata who, in an editorial of the newspaper Página 12 in 1989, invented the concept of the “crack” to make a difference between those who were in favor and against the military regime that ruled the country from 1976 to 1983

Then, during the two governments of Cristina Kirchner, between 2007 and 2015, the term became popular jargon to draw the line that separated the defenders and critics from the impetuous president.

So strong was the rejection that Kirchner generated in 2015 in certain sectors, that an anti-K vote elected a millionaire businessman who became a politician: Mauricio Macri.

The crack remained intact for the past four years. Now it is the rejection of Macri that could choose Cristina's ally, Alberto Fernández.

The military regime of the 70s and 80s was a factor that divided the Argentines, among many others. There the concept of the "crack" appeared, although the phenomenon is earlier.

Crack among Argentines, however, there are at least since the 1940s, when a charismatic general named Juan Domingo Perón created the movement that continues to dominate politics.

Since then, Argentine politics has been divided between those who define themselves as Peronists and those who do so as anti-Peronists.

The paranoia of a scientist in the classic movie “Mogambo” (1953), that every time he heard a noise he thought it was a gorilla, led the anti-Peronists to call themselves that way on the eve of the military coup against Perón in 1955.

Perón was later exiled for 17 years. Although Peronism was outlawed, their supporters grew and some founded clandestine movements, such as the guerrilla montonera.

In 1976, another military coup again overthrew Peronism and inaugurated a de facto regime that left tens of thousands missing.

AFPLa criticism of Peronism, but especially towards Cristina Kirchner, is almost always visceral. The bag, in case it seems weird, is in reference to the official K who hid dollars in bags in a convent.

This is how "gorilla", a nickname that came from being a self-praise in the name of fierceness, became an insult that invokes the measures of governments that banned and persecuted Peronism.

The three times that non-military antiperonism ruled Argentina since the establishment of democracy in 1983, with Macri being the last example, the country entered into an economic crisis.

Some will say that it is because the Peronists do not let govern; others, because "gorilism" does not know how to govern.

In any case, no matter if it is a compliment or an insult, "gorilla" is a key word to talk about anti-Peronism, a current almost as important as Peronism in Argentine politics.

That anti-Peronist theory that the Peronists do not let them govern is also based on the historical alliance of the movement with the unions.

In the 11 years that antiperonismo ruled in democracy since 1983, the unions made 27 general strikes. In the 23 years that Peronism ruled, they made 17.

AFPE In Argentina there are five trade union associations. Each with its internal groups. This, in the photo, is just one.

The unions in Argentina are complex, hermetic and disintegrated organizations that are led by strong men of considerable body mass. They are called "fat people."

They are power managers who do not campaign or go to Congress, but have as much influence as a senator.

Part of the force with which Fernández and Kirchner arrive at these elections is that they have the almost unanimous support (something already rare) of the unions.

40% of formal workers are enrolled in a union. According to the International Labor Organization (ILO), Argentina is the second country with the largest union representation in Latin America, after Uruguay.

A fundamental part of power management is dealing with fat people. Having them against is a stone in the shoe.