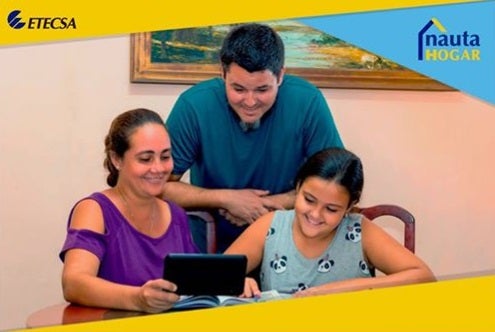 HAVANA, Cuba.- The Cuban Telecommunications Company (ETECSA) announced on Friday a new commercial offer, associated with the Nauta Hogar service (Internet in the houses), according to the Cuban monopoly itself published in its social networks and website.

The new option consists of the possibility of paying 10 dollars for 20 hours of Internet to consume in the month, and the offer is only valid within the speed range of 1024/256 kbps.

Along with the new payment rate, ETECSA announced that users who activate the Nauta Hogar service for the first time can enjoy it for free for the first 30 days.

Until today, the Nauta Hogar service offers consisted of four packages or possibilities to hire, which are maintained:

“They did nothing with the launch of this offer. What we need is to lower rates, today's prices for any form of Internet connection are disgusting, ”said Orlando Gomez, user of ETECSA.

The three ways to access the Internet in Cuba maintain excessive prices for the Cuban on foot, internet browsing in Wi-Fi zones costs one dollar per hour, with a speed of 2048/2048 Mbits and through mobile data. The most discreet package costs $ 7 for 600MB.

On the other hand, the salary of the Cuban on foot does not exceed 40 dollars per month.

Meanwhile, ETECSA, which has 5.6 million active lines throughout the Island, announced that it is still engaged in deploying 4G technology in Cuba before the end of the year.

However, according to data offered today, Friday, October 18 in the Morning Magazine program, of the four million lines that connect to the Internet through mobile data, only one million can connect to the 4G network, as the remaining users They do not have a device that meets the characteristics.